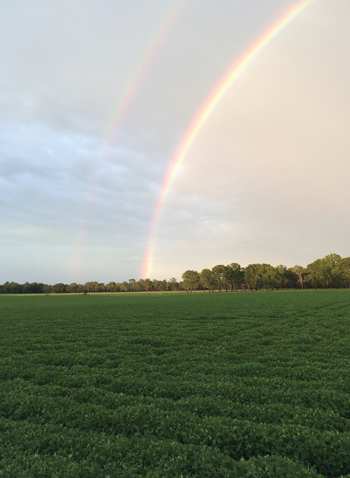 The piles of peanuts in warehouses waiting to be shelled means there’s no pot of gold to be found in the market this year. “Since 2013, the Southeast has increased acres 63 percent, and the total U.S. has increased acreage by 52 percent,” says Dell Cotton, Virginia Carolina Peanut Growers Marketing Cooperative. “That’s just in the two years since the Farm Bill came into play.

“For production, nationwide, we’ve had a 49 percent increase since the Farm Bill, and the top three largest crops have happened in the last four years.”

Cotton says the rule of thumb used to be that we needed 500,000 tons to carry us over from one year to the next crop year. “That was an adequate supply and helped ensure good prices the next year,” he says.

Once again, the warning to producers is not to plant peanuts without knowing where they will go.
“My concern is that at harvest time in 2016, there will not be as much warehouse space as was available in 2015,” says Nathan Smith, Clemson University Extension economist, despite the fact that more warehouse space was built in the past year.

Producers are also cautioned not to assume that the peanut buyer will store all of your peanuts.

“You’ve got to make sure you’ve got a home for those peanuts,” Cotton says. “And, if you have a contract for a certain tonnage, you can’t assume they will take over that amount.”

Tonnage Over The Contract

Cotton also reminds producers that every pound produced beyond the contract price, could bring down the average price.

Making more and more yield on the same amount of acreage is a good thing, but making more yield and planting more acres has led to significant over production. “Historically, we’ve always gauged supply and demand with how many acres we’ve planted,” Cotton says. “But, if we only look at acres planted and don’t take into consideration yield, we’ve missed half the boat.

“If you say, ‘I grow peanuts on the same number of acres,’ but you don’t take into account how much the yield has increased on that same acreage, then you don’t realize your part in contributing to the overproduction.”

In the last 12 years, the Southeast went from an average yield of around 2,900 pounds to the mid-4,000-pound range, adding nearly a full ton of yield capability to production in just more than 10 years. Even more can be achieved much of the time, especially on irrigated fields.

“Production has definitely caught up with demand,” Smith says. “Domestic demand has been generally stable to growing just slightly. Exports are slowing down. There will be low prices compared to two years ago, and producers can expect a lower net income because expenses have not adjusted down with commodity prices.”

“The U.S. Energy Information Administration expects supplies to tighten, but there are so many factors that go into fuel supply prices,” she says. “It does mean, though, that fertilizer prices are down as well, with potash being at its lowest price in seven or eight years. Fuel being down also helps with irrigation costs.”

Nathan Smith says producers need to be as efficient as possible. He tells a story about a Georgia producer who was a very good manager of his farm.

“He used to say that the years he made the most money were those years right after a very tough year. It forced him to do things he didn’t want to do and get more efficient. Assess your situation and make those decisions you may not want to make,” Smith advises.

That’s about all producers can do in a year of such low prices, limited contracts and little alternative.