Acreage adjustments have helped reduce carryover, and the same is needed in 2020. 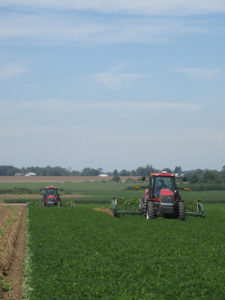 Market Highlights
• Acreage adjustments have helped reduce carryover.
• Total U.S. average yield is nearly 4,000 pounds per acre.
• The 2019 crop had significant aflatoxin levels.
• Price continues to be near $400 per ton.
• What effect trade agreements will have is still unknown.

The past three years have been tough, to say the least. A tremendously big crop in 2017 created a carryover that has been looming over producers’ heads. Although adjustments were made in planted acres in 2018 and 2019, those crops were affected by Hurricane Michael, flooding and a quality-degrading drought in 2019.

The National Peanut Lab’s Research Director Marshall Lamb says it has taken three years to work off overproduction from the 2017 crop.

“Producers made adjustments in acreage during the 2018 and 2019 crops that has moved the carryforward to a better position.”

Dell Cotton, executive director of the Peanut Growers Cooperative Marketing Association, Suffolk, Virginia, says 2015 through 2017 were some of the biggest production years, and that’s what created the hole the industry has been trying to dig out of since.

“One reason for those big crops was the introduction of generic base in the 2014 Farm Bill, which resulted in the planting of peanuts over other crops because of the better price. When we got that changed in 2018 is when things started to settle down a bit.”

An Increase In Average Yield

The average yield, nationwide, was 3,933 pounds per acre, and Arkansas produced the highest yield at 5,204 pounds per acre.
“It’s amazing how well we have developed our varieties,” Cotton says. “Georgia hasn’t dipped below 4,000 pounds per acre since 2012.

“Whether we are talking about acres, yield or production, this past year’s numbers were like 2018.”

One difference in 2019 was drought and the significant increase in aflatoxin.

University of Georgia Extension Agriculture Economist Adam Rabinowitz says yield was adjusted because of the effects of drought in dryland production.

“Quality of the crop was a concern because aflatoxin was at its highest rate since 2016.”

Cotton says, “Nearly 2% of the whole crop was Seg. 3 due to drought. For Alabama, Georgia and South Carolina, it is the second consecutive year at least some portion of the state had drought.”

He says the increase in aflatoxin is a problem when sending peanuts to the European Union, which has strict rules for quality.

“We export about 25% of our production,” Cotton says. “In years when we had increased consumption and demand, it usually means we exported more than expected. Our best export years came when China bought a lot of our peanuts.”

In the newly signed Phase One deal, China has agreed to purchase an additional $40 million in agricultural goods each year.

“It may be optimistic where China is concerned, but the strengthening of competing crops, specifically cotton and soybeans, would have more to do with an upturn in peanut contract prices than anything that could happen in peanuts, directly,” he says.

“We need for China to be a reliable market and a stable export destination for our peanuts. That would be the best outcome for the recent trade agreement.”

Even with the reduction in carryover, there are still too many peanuts.

Looking ahead to 2020, Rabinowitz says, one needs to consider the continued excess supply and the stagnant demand during the past four years.

“A price near $400 per ton is expected. Farmers are advised to consider their individual risk tolerance and what makes sense for their business given their own financial situation. One strategy at current market prices might include contracting for some of the expected production and waiting for the market to develop throughout the year.”

Lamb agrees that the correct amount of planted acreage is critical in 2020. He looks for it to be influenced by cotton prices and plantings over the next two months.

“We can get to a good carryout position going into 2021 if we produce the same tonnage. However, we can easily overplant in 2020 and be in a period of oversupply again, which would affect us 2021 and beyond.”