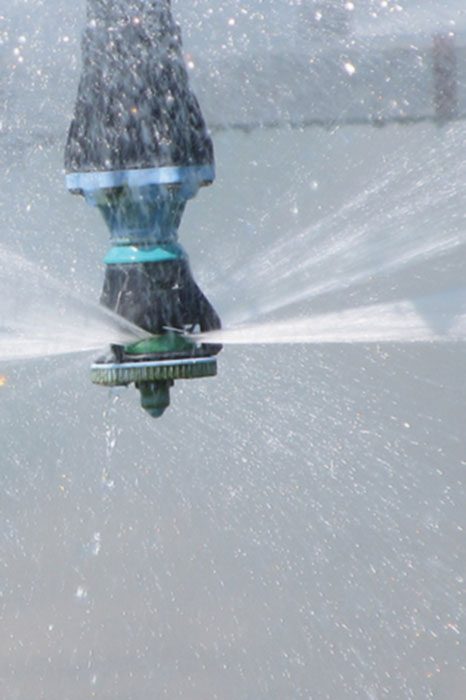 In a comparison of five scheduling methods in four varieties, which method worked best? The weather can never be predicted, but has a huge impact on crop production and final yield. So, we must adapt to changing conditions and manage our crop to adapt to these conditions. 2014 was a prime example of variable weather conditions with a very wet early season.

This was good to build soil moisture, but heavy rains in late April and early May caused split plantings in the peanut crop, which caused a major problem because the crop had to be managed for two maturity levels. It was also a problem from the stand point of irrigation scheduling. Since peanut water use is very dependent on maturity, see the weekly water-use chart, split maturity levels means that the crop has to be managed separately for optimum irrigation throughout the season.

Another issue that arose during the 2014 production season was that even though we had plenty of soil moisture built up from the very wet spring, it quickly turned very hot and dry. Looking at rainfall data, there was not a significant rainfall event from June until early September, which caused the dryland peanut crop to suffer tremendously.

Yields from the dryland crop were very low to none as the research results below will show. However, irrigated peanuts performed very well and had some very high yields of 6,000-plus pounds in some cases.

Producers have many options available to determine when and how much to irrigate their peanuts. Some of these methods include the UGA checkbook method, the UGA Easy Pan, online scheduling tools and soil and/or crop sensors. In some instances, such as checkbook method, it is up to the producer to monitor rainfall and subtract that amount from the total amount required by the crop for each week. The total amount required minus rainfall would be the crop requirement. The UGA Easy Pan, which can be found at extension.uga.edu/publications/ detail.cfm?number=B1201 , is a simple cheap method to estimate in-field evapotranspiration. Look online for detailed information on construction and use of the UGA Easy Pan.

More advanced irrigation scheduling methods include soil and plant sensors. For example, in a research trial performed this past season, the UGA Smart Sensor Array (UGA SSA), which uses Irrometer’s Watermark sensors and SmartField’s SmartCrop canopy temperature sensors, was used. A wide variety of sensor options that could be easily integrated into producer practices are available.

An irrigation scheduling trial was conducted at Stripling Irrigation Research Park in Camilla, Ga., this past year that compared five different irrigation scheduling methods to dryland or rain-fed peanuts. The treatments tested were UGA SSA, SmartCrop, UGA Easy Pan, UGA Checkbook and UF PeanutFARM. Each of these methods can be employed by producers and are relatively easy to use and determine irrigation requirements.

Georgia-06G was the overall highest yielding variety followed by TUFRunnerTM ‘511,’ Georgia-12Y and TUFRunnerTM ‘727.’ Within the treatments, generally the UGA Smart Sensor Array, which only recommended 9.4 inches of water, provided the highest yield level. Depending on variety, either the SmartCrop or the UGA Easy Pan was the next highest yielding. UF PeanutFARM tended to under apply irrigation, only 7.9 inches, while the UGA Checkbook method tended to over apply, 15.02 inches. In this case, it seems that over watering from the UGA Checkbook method may have reduced yield, at least when compared to the other treat ments that were a little more conservative with water and recommendations based on environmental conditions.

In some cases it would be economically feasible to use the UGA SSA, but in other cases, it would pay to use the cheaper method of the UGA Easy Pan. The type of scheduling strategy to choose really depends on each producer’s specific operation and management style. It is always easier to start simple and work more advanced.

The uniformity of water application under a center pivot is determined by setting out cans or rain gauges along the length of the pivot, bringing the irrigation system up to proper operating pressure and letting the system pass over the gauges. Rain gauges make it easy to record the amount in inches. Record the distance from the center of the pivot and the amount of water collected for each can or gauge.

Uniformity Of Application Aids In Uniformity of Maturity

With this information, a number of methods/ formulas can be used for determining application uniformity, and certain methods are preferred for different types of irrigation systems. However, you may decide to simply plot the data along a line to reveal places along the pivot where “more” or “less” application amounts occur. With this graph, you can likely see that only a few sprinklers may need to replaced or, if more than a few sprinklers are involved, the whole system may need to be renozzled.

For more information on evaluating center-pivot uniformity, go to the University of Georgia’s publication search website at extension. uga.edu/publications and search for “Evaluating and Interpreting Application Uniformity of Center Pivot Irrigation Systems” by Calvin Perry and Kerry Harrison. For other irrigation-related topics, go to striplingpark.org.