Looking Ahead to the 2018 Season 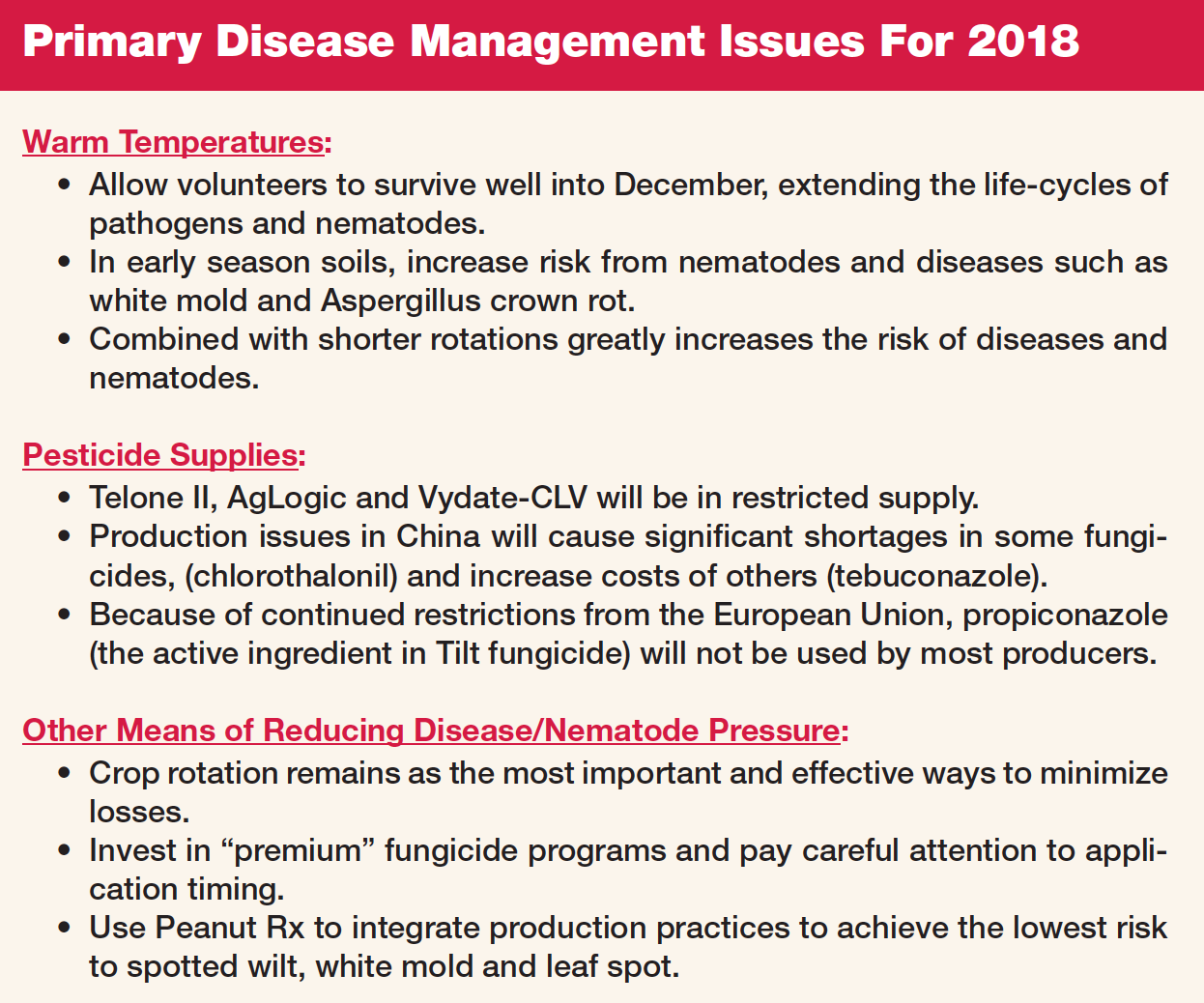 If the 2017 field season was any indication, disease and nematode management issues will continue to be of increasing concern in 2018. Looming on the horizon for 2018 will be the impact of a warmer and drier winter, shortages in popular fungicides and nematicides, and large acreages planted once again to peanuts. These three factors could add up to cause real headaches for peanut farmers. Warm Weather To Continue
The winter of 2017-2018 has been characterized as a “La Niña”. During a La Niña winter, cooler-than-normal temperatures along the equator in the eastern Pacific Ocean create conditions that are warmer and drier than normal in the southeastern United States. This does not mean that farmers in this region will not experience periods of cold and wet, only that overall temperatures will tend to be warmer and precipitation lower than normal.

Warmer and drier conditions may make for a comfortable winter season; however it does not help farmers with disease and nematode management in the upcoming year. Warmer temperatures allow “volunteers” sprouting after harvest to survive well into December. Volunteers extend the life-cycles of disease-causing-pathogens and plant-parasitic nematodes. Warmer-than-normal soils early in the growing season may also increase risk to nematodes and diseases like white mold (southern stem rot) and Aspergillus crown rot.

Rotate, Rotate, Rotate
Crop rotation is one of the most important and effective ways to minimize losses to disease and nematodes. Peanut farmers are encouraged to plant peanuts in the same field only once every three years. Acreage planted to peanut is expected to remain high in 2018, continuing to put pressure on growers to find ways to implement good rotation between crop rotation.

As years between peanut crops dwindle in a field, risk to white mold and leaf spot increase and yields drop. The best crops for rotation with peanuts include grass crops like bahiagrass and corn. Cotton is a good crop to rotate with peanuts. Soybeans, which are affected by CBR, white mold, and the peanut root-knot nematodes, should be avoided if possible.

What Else Can You Do?
Shorter rotations and a La Niña winter increase risk to diseases and nematodes. Growers can reduce, but not eliminate such risk by planting resistant varieties where appropriate, investing in better “premium” fungicide programs and by careful timing of the application of fungicides. In 2018, growers can battle peanut root-knot nematodes using varieties like TifNV-HiOL, TifGuard, and Georgia-14N and with nematicides to include Telone II, Velum Total, Propulse, AgLogic, and Vydate-CLV. In addition to selecting a “best” fungicide program, growers can improve performance of a fungicides by planting varieties with better disease resistance, considering in-furrow and early-emergence applications, spraying fungicides at night and timing applications around irrigation and rain events.

Pesticide Shortages Expected
Disease and nematode management will be further complicated in 2018 by tight supply of a number of important products. Telone II, AgLogic and Vydate-CLV will be in restricted supply in 2018. Production issues in China are predicted to cause significant shortages in some fungicides, like chlorothalonil, and increases in cost of other fungicides, to include tebuconazole. Due to continued restrictions from the European Union, propiconazole (the active ingredient in Tilt fungicide) will not be used by most peanut farmers again in 2018.

Because of restrictions and shortages, growers should plan early to ensure that they have the management program they need for the new season. Growers can begin to talk with distributors to check on availability for seed, nematicides and fungicides. Growers should begin to develop fungicide programs appropriate for the disease risk in their fields. Where shortages exist, growers should look for suitable alternatives. Growers can get more information through the local Extension agents, industry representatives, consultants and distributors.

Use All Portions Of Peanut Rx
The 2018 version of Peanut Rx is an excellent tool by which growers can integrate production practices to achieve the lowest risk to tomato spotted wilt, white mold and leaf spot diseases. Peanut Rx assigns risk points to factors including variety, planting date, crop rotation, tillage, seeding rate/plant stand, use of at-plant insecticide, row pattern and irrigation. Using Peanut Rx, growers can both work to reduce risk in a field and also adopt fungicide programs appropriate for the level of risk in the field. Peanut Rx will be available in various forms to include industry fungicide guide and a free smart-phone app available at the App Store and Google Play.

Disease and nematode management may be more difficult in 2018 because of our winter, reduced product availability and tight rotations. However, with careful planning, peanut farmers can develop a management program to help them achieve strong yields in the coming season.

Phipps’ life and career truly embodied the spirit of service. Dr. Phipps was a member of American Peanut Research and Education Society for 38 years and during this time he attended 35 meetings, serving as President in 2005, Vice President in 2004, and, as a member of the Board of Directors, from 1999-2001.

Phipps had a distinguished career in research and Extension with a focus on disease control in peanuts, work that is considered the industry standard in peanut production, and recognized by Virginia Tech, APRES and American Phytopathological Society as noted by the following: elected Fellow of APRES in 2002; received the Coyt T. Wilson Distinguished Service Award in 2012; the American Peanut Council’s Peanut Research and Education Award in 2000; the Excellence in Extension Award in 1994, and the Outstanding Alumnus Award in 2006, from the Virginia Tech College of Agriculture and Life Sciences Alumni Association; awarded the APRES Wallace K. Bailey Award for best paper presentation in 1985, 1990 and 2007; the APRES Dow AgroSciences Award for Excellence in Education in 1999; the Excellence in Extension Award from the APS in 1994; presented or served as a co-author with graduate students and colleagues at each of the 35 APRES meetings that he attended.

Phipps was born in New Martinsville, W.V., and he earned a Bachelor of Science in 1970 in biology from Fairmont State College, a Master’s in 1972 in plant pathology from Virginia Tech, and a Ph.D. in 1974 in plant pathology from West Virginia University. He accepted a post-doctoral position at North Carolina State University, where he remained until accepting an assistant professorship in the Department of Plant Pathology at Virginia Tech in 1978. At Virginia Tech, he climbed the ranks of the professorship including Associate (1983), Full (1989), and Emeritus (2010).