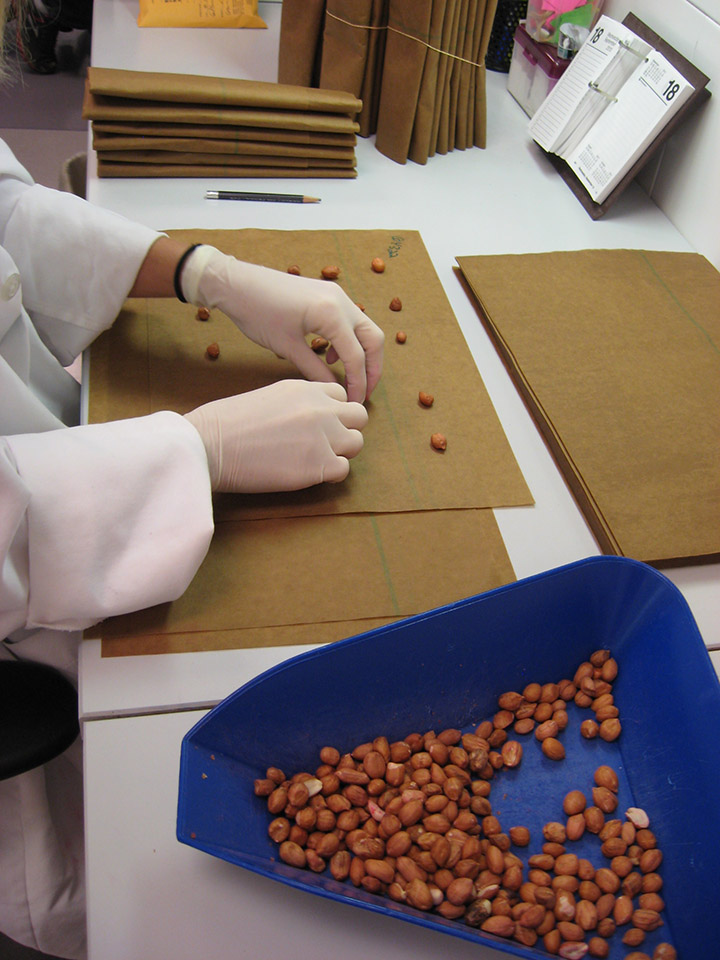 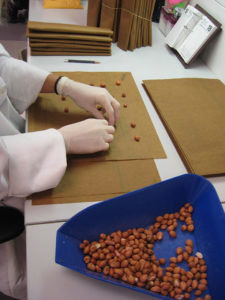 University of Georgia Extension Peanut Agronomist Scott Monfort says, “You need to end up with four plants per foot of row on the final stand to not have skips or gaps.”

No Skips Or Gaps

Early research on tomato spotted wilt virus found that the disease was more prevalent around skips or gaps in peanut coverage. The recommendation to plant enough seed to provide at least four plants per foot to reduce the impact of TSWV stands today.

“Although you want to plant good quality seed, you can’t bank on having perfect seed,” Monfort says.

How do you know if you have good quality seed? “That’s not an easy question to answer,” says University of Georgia Cropping Systems Agronomist Scott Tubbs. “One thing producers should do is a visual inspection of the seed before planting.

“If you see a bunch of split seed, those are not going to germinate. You may need to bump up your seeding rate so you get the number of viable seed in the ground that you need.

“If you get your seed early enough, you can pull a sample out and send it to a seed lab for a more accurate germination rate. You can also conduct a rudimentary test at home.”

Tubbs also suggests producers keep all the seed bag tags and note the purchase and delivery dates. Additionally, keep a small sample of each bag in a cool, dry place so that if a stand problem does arise, the sample can be sent to the lab for germination tests.

“Keep your sample under proper conditions so that it can be tested and you can use it in the event of a seed arbitration issue. Seed is a significant investment so you want to take care of it and get it in the ground under optimum conditions.”

A Rate To Achieve Optimum Stand

Monfort says this year there are some concerns about germination rates of peanut seed, and farmers will need to consider seeding rate carefully. 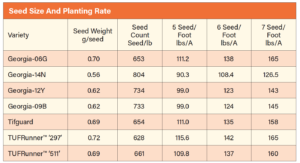 “Seeding rates need to be adjusted for percent germination of the seed being planted to ensure you have the desired plant population. However, we have found that if you are pushing the seeding rate above a rate that gets you four plants per foot of row, you may be spending money that you don’t need to spend,” he says.

In an on-farm trial in 2019, Monfort looked at seeding rates of six, seven, 10 and 11 seed per foot using a variety with 700 seed per pound on single rows.

“We had to think, ‘What’s going on with the last two? Why are we losing so many plants?’

“If you look at that data, an additional three seed per foot only gained 1.1 more plants per foot,” Tubbs says. “In that situation, it cost a lot of extra money to put seed in the ground that did not gain extra plants.”

When costs were added in, the seeding rate of seven seed per foot made $19 per acre.

“At 10 seed per foot, we lost $42 per acre and at 11 seed per foot, the loss was $58 per acre,” Monfort says. “Although it was just one year of data, I think we found that the higher seeding rate did not add more yield but did add more cost.”

“In all the cases, they were above four plants per foot and the needed population to maximize yield potential had already been reached. The extra plants weren’t doing anything to add more yield,” Tubbs says.

Many other factors go into achieving a uniform stand of vigorously growing peanuts, but a final stand of four plants per foot of row is best to reduce the risk of TSWV.