Planting into a weed-free field, applying residual herbicides and knocking back that first weed flush reduces competition and yield loss. 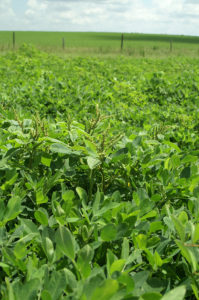 A big part of getting the crop off to a good start is managing weeds. The key is planting into a clean field and then applying preemergence herbicides as quickly as possible behind the planter. Timely irrigation and/or rain will be needed to activate the herbicide and prevent weeds from emerging.

As with most farming activities, this is easier said than done, especially where Palmer amaranth is concerned.

University of Georgia Extension Weed Specialist Eric Prostko says, “You can’t plant into a field where pigweed is already up. You need herbicides or tillage or both.”

Learning to manage Palmer amaranth has taken years for any grower who has encountered it. Even now, lessons are still being learned, sometimes painfully.

“I had a call from a grower who let pigweed get 4 to 5 feet tall in a field,” Prostko says. “Before planting, he mowed the whole field and then rototilled it twice. All the weeds were pretty well chopped up, and he thought he had done a good job. He planted and put out a preemergence herbicide.

“A week later he called to say the preemergence herbicide didn’t work. In the field, the chopped-up plants had rooted back and were growing again.

“What the grower spent going through the 100-acre field, rototilling twice, herbicide, all that was money lost. The pigweed was not controlled, and now it was growing in the field and interfering with the growth of his peanut crop.”

A Calculation Of Losses

In studies, Prostko has determined the estimated yield loss in peanuts from not removing weeds.

“At three weeks, you have lost 5% of yield. At five weeks, you can expect a 20% reduction in yield, and at seven weeks 35% of yield is lost. Letting weeds escape is hurting your pocket.

“Thinking you can wait until all the weeds come up is also a mistake. The ones you do not get while waiting on others to come up will get too big to control. Don’t wait.”

Prostko is also concerned that too many herbicides are applied without reading the label.

“When was the last time you really read the label? It took 10 to 11 years to come up with that label. I know they’re difficult to read sometimes, but most of the problems I see could have been prevented by reading and following the label.”

“In addition, the soil seed bank will be drastically reduced by controlling weeds before they make seed. As growers start seeing some weeds escape residual herbicides applied prior to or at planting, they should be timely with applications of postemergence herbicides.”

According to the article, when applying early postemergence and postemergence herbicides, the following factors must be considered.

“Always apply early post and postemergence herbicides when soil moisture conditions are good. Weeds must be actively growing to absorb and translocate the herbicide for maximum efficacy. When herbicides are applied to weeds growing under stressed conditions, such as drought, high temperatures, disease or insect damage, reduced efficacy is often observed.”

The authors also suggest producers use enough spray volume to achieve good coverage for improved weed control.
“Often, weed control failures after the application of postemergence herbicides are due to low spray volumes and insufficient coverage.”

The use of herbicides with different modes of action is key to delay/prevent the development of herbicide-resistant weed biotypes. Activity from herbicides will quickly decrease as weed size increases beyond 4 inches. Waterhemp, a member of the pigweed family, and Palmer amaranth can reach this height as quickly as eight to 10 days after emergence. Frequent scouting is important to make prompt weed management decisions regarding herbicide applications.[divider]

North Carolina State University Extension Peanut Specialist David Jordan says, “Across the peanut belt, we deal with Palmer amaranth as one of our resistant weeds. If you do a good job on Palmer, you probably do a good job on most of the other weeds.”

But in the Virginia-Carolina production area, Jordan says, they have herbicide-resistant common ragweed as well.

Jordan says one thing that concerns him is the possible resistance to one of the grass herbicide programs.

“In the past, somebody would call and say they have a grass problem that was pretty big. I would advise them that using the highest possible rate would likely kill it. But I’m getting more follow-up questions now about the grass not dying.”

In 2018, a population of yellow nutsedge resistant to the ALS herbicide, Cadre, was identified by University of Georgia Weed Scientist Eric Prostko. The yellow nutsedge tubers were collected from a peanut field after Cadre resistance was suspected, and the resistance was confirmed in greenhouse testing. The field in question was continuous peanut under dryland conditions with the use of Cadre each year. This underscores the need for rotation of crops and the application of herbicides with different modes of action.

“We need to spend more money up front on residual herbicides,” Jordan says. “Make sure Gramoxone in the mix. Anything we can do to take the selection pressure off or not let grass escape and get thicker will help with resistance.”

Jordan says herbicide-resistant grasses would lead to significant yield loss in peanuts. “We need to be proactive.”