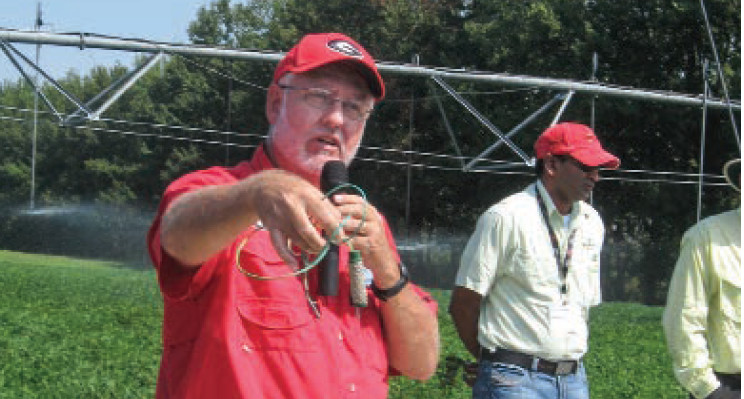 Wasted water is money down the drain; ensure that applied water is being used by the crop.

With top-soil moisture registering as very short in six peanut states in mid-May, producers are hoping the drought trend breaks in favor of timely rains. Rarely though is irrigation not needed at some point during the production season.

“Weather conditions from year to year are variable, can be difficult to plan for and have a large impact on crop growth, development and yield,” says Wes Porter, University of Georgia Extension irrigation specialist. “So we must find ways to adapt to changing conditions and manage our crop to these varying conditions.”

Many options are available to aid in determining when and how much to irrigate peanuts. Porter says when we talk about irrigation scheduling, we are really talking about determining how much water is needed and when to apply it to the field to meet crop demands.

“The purpose is to increase profitability and/or crop quality by increasing the efficiency of using water and energy or by increasing crop productivity,” he says. “We want to make sure that what we put out is being used by the crop and not being lost to runoff or evapotranspiration.”

The Price Of Wasted Water

University of Georgia Ag economists put the average cost of irrigation at $7.50 per acre inch of water applied. “Using this average, for 1,000 acres of irrigated land at 10 inches of irrigation, that’s $75,000,” Porter says. It’s obvious why every drop needs to be used by the crop and not wasted. Of the methods used to schedule irrigation, based on a USDA National Agricultural Statistic Service Survey, visible stress, feel of soil and calendar schedule top the list.

“If you are waiting on true visible stress, that’s lost yield potential on almost every crop we grow,” Porter says. “We need to use a better method.”

The UGA Checkbook is another most commonly used methods for irrigation scheduling. However, Porter says caution should be exercised when implementing the checkbook because it was developed based on historical averages and is not an exact fit for years that are either wetter or drier than normal as it will over- and under-predict water need in those years respectively.

“The total estimated water requirement based on the UGA Checkbook for peanuts is 23 inches,” he says. “It was developed based on historical evapotranspiration estimations over a number of years and is a very conservative method, meaning it will typically ‘over-water’ when compared to the actual crop requirement.”

Porter says irrigation research over the past three years suggests that the UGA Checkbook over-irrigates peanuts causing both yield losses compared to other scheduling methods and costing much more from unnecessary irrigation events. Research is still being performed to determine exactly how much it should be reduced.

Online scheduling tools available are the USDA’s IrrigatorPro and University of Florida’s PeanutFARM. Both methods use local data to estimate peanut maturity through growing degree day models. By tracking rainfall and evapotranspiration, the tool will offer an estimated irrigation requirement.

“Two of these sensors, for example, are capacitance and tensiometic soil moisture sensors. Meter and Watermark are two commonly known sensors of each type. A plant sensor includes SmartField’s SmartCrop canopy temperature sensor.”

A favorable feature of the sensors is the wide variety of options and the ability to be integrated into a system for the producer.
The UGA Easypan has proven time and again that it is a reliable method for estimating field evapotranspiration. It is also simple and inexpensive to build.

Porter says that any method chosen should be based on the producer’s comfort level with technology and irrigation management.

Because of abundant rainfall in 2017, Porter found no significant differences in yield between the irrigation scheduling treatments. However, there were differences between the amount of irrigation that was applied and in the Irrigation Water Use Efficiency (IWUE).

“Since there was only irrigation applied to establish a stand and to activate herbicides, it had the highest IWUE. This was a high yield for a dryland crop,” he says.

Porter says the UGA Smart Sensor Array or WaterMark probe system had not only the highest IWUE but also had the highest yield. IrrigatorPro, UGA EasyPan and PeanutFARM, all had respectable yields and decent IWUE.

Even without planning to, peanut producers have become more water efficient simply through the seed they plant. Newer peanut varieties have increased yields without increasing water consumption, which makes them more efficient at water use in terms of production. Knowing when and how much to irrigate through an irrigation scheduling method increases that efficiency and profit potential on the farm.