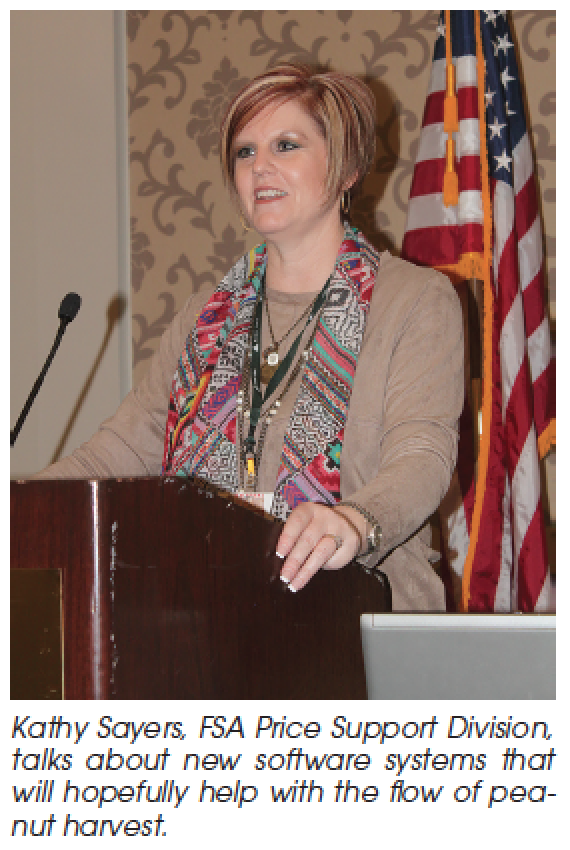 Speakers from the buying point convention offer some thoughts on the 2016 season.

The National Peanut Buying Points Association, representing more than 400 peanut buying locations, held their annual convention in February at the famous Peabody Hotel in Memphis, Tenn. The following is a recap of some of the presentations made at the convention. Karl Zimmer, CEO of Premium Peanut, shared some observations at the buying point convention from the perspective of a newcomer to the industry, since both Zimmer and Premium Peanut fall into this category.

A key topic of Zimmer’s message centered around asking questions and understanding why actions are taken based on data and fact versus perception or opinions.

As part of their discovery process and in order to compete long-term, Zimmer says, “We should understand how the various elements of the peanut supply chain, grower, buying point, sheller and manufacturer, are interlinked and work together to make decisions that will lower the total cost of the entire supply chain. Unless we look at how our individual actions impact both our supplier and customer, we are at risk of adding total cost to the peanut – which only makes us all less competitive.”

Zimmer encouraged the audience to challenge existing practices in the industry in order to find new and innovative ways to move forward as an industry. In addition to moving to data-based decisions, Zimmer highlighted opportunities to develop and implement information technology systems integrating the whole supply chain and sharing risks/rewards to incentivize the right actions in each step in the supply chain. He also emphasized the importance of developing international markets and supporting them on a continual basis instead of only in years when the United States has an excess peanut supply.

Anupaw Gindel, Olam International, Ltd., president and head of peanuts division, said that the world peanut market is assured of a plentiful supply of over 40 million metric tons of peanuts.
India’s production has declined because of poor weather, but a substantial increase in runners comes from the United States and Argentina. Argentina had a record crop in 2014-15, and 2015-16, despite reduced production expectations, will be one of their larger crops.

Ending world market stocks at over 2,004 million metric tons is significantly impacting global prices, which was led by United States because of its position as cost leader. Chinese delinked peanut prices from the world price trend because of the short crop in 2014. Argentina followed suit with a lag but maintained a small premium.

His conclusion was that “barring extreme weather events in multiple geographies, low prices are here to stay.”

Peanut Storage Must Be Approved

Ned Bergman, chief of the Examination Branch of the Warehouse License and Examination Division, told attendees at the buying point convention that the peanut industry has 32 licenses with 334 warehouse locations approved for storing peanuts.

The capacity approved is more than 3.8 million tons, but for farmers, the warehouse location may not be near their farm or shelling plant. This compares to 29 licenses covering 308 warehouses and 3.45 million tons last season.

Farmers have been concerned and warned to not plant peanuts unless arrangements have been made for storage and possible collection of loan rates of $355 per ton. Storage must be approved by Warehouse License and Examination Division prior to the start of the season.

Review Of The Peanut Program

Kathy Sayers, Peanut Price Support Specialist with USDA’s Farm Service Agency told buying point managers that although 2015 had been a tough year with a lot of changes at USDA, “We made it!” She listed major projects such as two new software systems, a new reporting format, new transmission ID formats, new guidelines and handbook, plus five new handlers.

She knew that legislation passed would enable the use of commodity certificates for market loan gain, which would help with payment limitation, was a positive step and that “most software issues have been identified and corrected.”

What are USDA’s key issues for 2016? Sayers said the potential for another increase in peanut acreage, storage issues, an unknown amount of forfeitures and hoping that adjustments to FSA software would make this coming harvest better are some of the key points they will be watching. PG