Just as planning for planting next year begins as soon as the crop is harvested, planning what will happen to fields in the winter begins while the current crop is in the ground.

Cover crops are those grown to benefit the following crop as well as to improve the soil. They help protect the soil, feed the soil eco-system, increase soil organic matter and supply nutrients to the following crops. Selecting the right cover crops for your operation can improve yields, soil and water conservation and quality – and your bottom line.

Cover crops can improve soil fertility in several ways. Legumes and their associated bacteria produce nitrogen that becomes available to following crops as plant residue decomposes. Unused nutrients from the previous crop are taken up by the cover crop, reducing leaching losses. Deep-rooted cover crops scavenge nutrients from deep in the soil. These nutrients become available to crops the next growing season as the residue decomposes.

Pest pressure in the subsequent crop can be reduced with the use of cover crops. Weed growth is suppressed on the soil surface by thick plant residue that blocks sunlight and physically slows weed seedling growth. Some cover crops produce allelopathic chemicals that inhibit the growth of weed seedlings. Others suppress parasitic nematodes by repelling, confusing or starving them. Cover crops can help break the “green bridge” over the winter reducing early pest pressure in the following crop. However, some cover crops can support nematodes and diseases harmful to following crops, so care must be taken to select the right cover crop for the cropping system.

In 2021, Alabama Extension soil scientist Audrey Gamble planted cover crop demonstrations on five farms throughout Alabama. The goal was to determine the highest biomass producer and identify varieties that would work in different growing situations.

Gamble, who is also an associate professor in the Auburn University College of Agriculture’s Crop, Soil and Environmental Science department, says they planted each demonstration during the last two weeks of October. The farms were in Autauga, Geneva, Henry, Lawrence and Lee Counties.

“Most of our cover crop trials are planted on research stations,” Gamble says. “But I wanted to plant these on-farm demos so farmers could gauge what cover crops might work on their own farm.”

Researchers planted all of the demonstrations with a no-till drill. Producers and the team did not fertilize cover crops as part of the experiment. However,  chicken litter was applied at the Geneva County location in early spring. 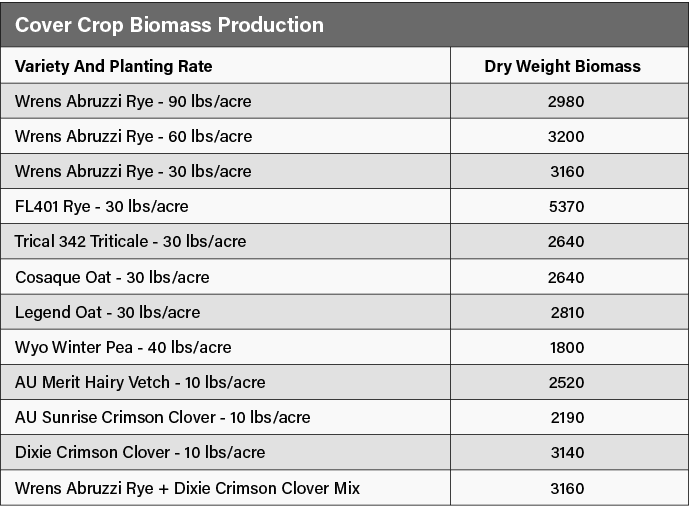 ■ Low seeding rates of small grains can be high biomass producers. When planted with a no-till drill, 30 pounds per acre of rye produced comparable biomass to 90 pounds per acre across locations. Gamble says cutting seeding rates is a great way to save money on cover crops. Increase rates by about 50 percent when broadcasting seed.

■ Patience is a virtue when it comes to legumes. Across the state, Gamble says legume cover crops looked puny until mid-March, but rapid growth began in early spring. AU Merit hairy vetch was particularly useful for providing a solid ground cover to smother winter weeds.

“Regardless of the seeding rate, these cover crops produced approximately 3,000 pounds per acre of biomass at termination. This suggests that producers can save money on seed costs without sacrificing biomass production,” she says.

For more information on cover crop use in Alabama, visit the website at https://bit.ly/3toe7nw. PG