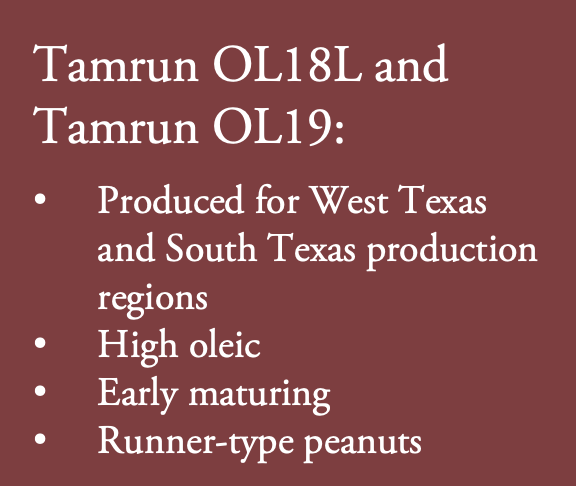 The goal was to develop a peanut that allows for earlier harvest than is possible with current cultivars. This will help reduce the potential for off-flavors associated with immaturity at harvest. Additional goals were to improve yield, grade and other agronomic characteristics when compared to Tamrun OL12 and Tamnut OL06.

“They’re early maturing varieties and have a better edible seed quality. They’re also high oleic, which all our Texas A&M AgriLife varieties released for the past 20 years have been,” Burow says. “So, they have a longer shelf life and are better for the coronary health of the consumer.”

Standard runner varieties of peanuts don’t mature very well in West Texas, he says. If they are immature and dry down sitting in the sun on a hot day, they might develop off-flavors – it’s called a fruity fermented flavor and is not a good taste consumers expect in peanut products.

Burow and other researchers have noticed that earlier-maturing peanuts tend to have less trouble with the fruity, fermented flavor.

“Flavor panels found that these two varieties have a good flavor, and we hope these will have less trouble with off flavors, too,” Burow says.

Development of a variety can take 10 years or more. Burow says during that time, Tamrun OL18L and Tamrun OL19 were tested against other varieties at multiple locations, anywhere from two to five locations per year for a number of years.

“They’ve done very well for yield,” he says. “It is important for a variety to have good yields for growers. One of the concerns was something that matures early may yield less. But these, especially Tamrun OL18L, yielded at the top of the test when compared to other commercial varieties.”

He says tests of Tamrun OL18L were yielding 475 to 830 pounds an acre more than some others, including Georgia 09-B and Tamrun OL11. Tamrun OL19 didn’t yield as high, but it has a smaller seed size that’s a little closer to the industry standard.

“Tamrun OL19 has a somewhat smaller seed that might be preferred by some of the processors. The larger-seeded OL18L might be the disadvantage for processors,” Burow says. “But yields a little bit better, which I think growers will appreciate.”

The varieties were bred in cooperation with other Texas A&M AgriLife peanut breeders, including from College Station, Mike Baring, now retired, and from Stephenville, Charles Simpson, retired but still active, and John Cason.

“The original crosses were made in Lubbock, along with the statistical analysis, but it’s been grown and tested in West, Central and South Texas. It’s a cooperative effort among the Texas A&M AgriLife locations,” Burow says.

A Lifetime Of Peanut Breeding

Burow has almost 30 years of total peanut breeding experience. He has been in the Lubbock region since 2001. Before that, he worked in College Station as a post-doctorate researcher for about five years and at the University of Georgia for two years.

“Because of the length of time it takes to get a new variety developed, we have to anticipate things a little bit,” he says. “We try to address what the growers need now, and certainly that’s important. But we also have to think of what they need five, 10, 15 years in the future. We try to project that and work on developing things based on that.”

Some traits they are working on now include higher yield, which is always important, and tolerance to water deficit — a critical trait because of declining water levels. Other traits include resistance to disease, including sclerotinia blight and leaf spot, and to root-knot nematodes.

All four market classes are grown in Texas, and, therefore, peanut breeders work on all of them.

“You never know when you make a cross if something will be good enough to be released. So, we’re working on all four market classes at the moment,” Burow says.

He expects a Virginia variety to be released later this year.

“After the Virginia, I think a runner variety that grows well under limited amounts of water will be our next release,” Burow says. “Growers still want a peanut that can yield reasonably well with reduced irrigation water.”

A general rule of thumb is peanuts require about 20 to 28 inches of water to grow. The hope is that growers can get maybe half of that from rainfall and the rest from irrigation.

To develop the “less thirsty” peanut variety, Burow says varieties are grown with one-third of the normal water or 6 to 10 inches less.

“Our testing gives them about 16 inches during the growing season, which allow us to test the peanuts under a lot of stress to find which ones do best with less water,” Burrow says.

“Water deficit is used from June through August for two reasons,” he says. “One is that’s when it’s hottest and growers are harder pressed to pump enough water. Secondly, studies have shown that the amount of genetic variability in peanuts is greatest during the mid-season, so the thought is that we can make the best gain in that time of year also.”