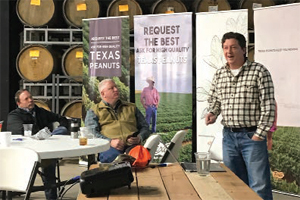 Research specific to organic production in the West Texas region is needed. 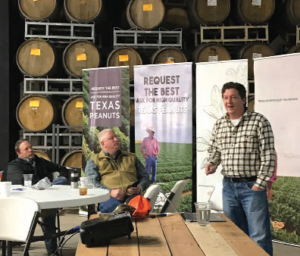 As organic food and fiber products continue to garner a growing part of the overall consumer market, those manufacturers looking to find trusted sources of quality organic peanuts need to look no further than West Texas.

With the help of a climate that does not favor fungal diseases as in the Southeast, West Texas producers work to overcome the other obstacles to meet a small, but growing, organic peanut market. Research specific to organic peanuts in the West Texas region would be a great asset to these growers.

Working To Get A Stand

Zach Stone is a peanut farmer in Gaines County, Texas, who started growing organic peanuts in 2014, following the path his dad had forged back in 2006.

“This will be my sixth crop on my own,” Stone says, but it is only in the last few years that he and other organic producers had more significant problems getting stands.

“There are a lot of theories as to why this is, but I believe we’re getting pathogens in the seed at some point,” he says. “It’s not a variety dependent deal. It’s more about where the variety comes from and how it’s been treated. Stand establishment is our No. 1 problem right now.”

Jeff Roper, a producer from Plains, Texas, and the current secretary/treasurer of the Texas Peanut Producers Board, grew his first crop of organic peanuts in 2013 because of the better price. Roper speculates that the handling of seed causes some of the issues with germination and stand establishment.

“It’s like dropping an apple. You don’t see a problem or a dark spot necessarily, but the next day, you take a bite and it’s mushy. I think we aren’t seeing the damage to peanut seed until it is showing up as problems in the field.”

Stone says that it is peanut seed that are grown in West Texas and never leave the area that seem to do best on his farm.

In an effort to find what varieties might work best in organic production, Stone partnered with International Peanut Group (IPG), a private peanut seed company, to conduct some on-farm research.

“In 2018, we put out a variety trial on Zach Stone’s, one of our grower partners, farm to see if there were differences in crop establishment and yield. It was a good first step, and we are doubling the size of the trial this year,” says Dylan Wann, IPG field plant breeder and research director. 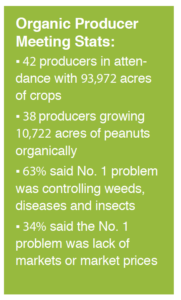 “We are taking conventional varieties and seeing if they will work,” says Mark Gregory, who is in charge of IPG’s business development.

In West Texas, producers cannot use a long-season variety. “Our growing season is 63 days shorter than the Southeast’s season on average,” Wann says.

Early Vigor Is The Key

The Spanish and Valencia are more vigorous market types under West Texas conditions, which is what you need in organic production, Wann says.

“Pest pressure is very different in the Texas High Plains than in the Southeast U.S.,” Gregory says. “There is lower pressure from foliar diseases, with little to no fungal leaf spot. Tomato Spotted Wilt Virus and other mosaic viruses are almost non-existent.”

But they do deal with soilborne disease, particularly Pythium pod rot and Rhizoctonia limb rot.

“There are no OMRI-listed seed products with proven efficacy against these seedling diseases and few varieties with consistent, proven resistance either,” he says.

“It all comes down to early season vigor,” Wann says. “Vigor is the key. It has got to get up and get going quicker than the disease can get established. That rapid stand establishment is the best mechanism for overcoming soilborne disease pressure.”

In their limited test, ACI 236, a Spanish variety, offered the best vigor, and IPG 274, a Valencia variety, also got off to a good start. But it was a Virginia variety, which was slow to get going, that put out the greatest final yield, Wann says. Unfortunately, the growers say there is no market for organic Virginia peanuts.

“If you ever let one go and it can seed out, you have got a major problem,” Stone says. “We do our best to keep it cultivated and hoed. We use cultivation as much as we can, but also have crews of about 150 people to hand hoe.”

Roper, whose first organic crop was on ground that had been out of production for 10 years, eventually transitioned to all organic peanuts, but is now moving back to conventional production all because of nutgrass.

“Once it gets into a field, it is impossible to get out without the use of herbicides,” Roper says.

Rotations help with both disease and weed pressure, but also presents yet another challenge.

“Our rotation is two years organic cotton, then peanuts. We used to do a milo/wheat rotation between peanuts, but those were not good cash crops,” Stone says. “There’s not much of an organic cotton market either, but we’re trying to make it work. If we could, it would be great.”

“You have to make the yield,” Roper says. “Land that is transitioned into organic production does not make the same yields as land that was fallow or in the Conservation Reserve Program. And with either one, yields will decrease unless you can rotate good enough.

“The only good crop to rotate is organic cotton,” he says. “It’s the only one that’s cost effective to keep it clean consistently, year after year. We tried milo, but that doesn’t pay enough to cover the hand labor you need.”

Roper says, “With wheat, it seemed like we could never grow what the mills were looking for that year, and what they were looking for changed every year. I enjoyed organic peanuts the first few years, but it has been a struggle lately.”
What’s really needed for these farmers is research on organic production in West Texas.

Stand establishment is the biggest predictor of yield, but there are currently no peanut seed treatments that are OMRI (Organic Materials Review Institute) approved that work effectively.

Roper says the Texas Peanut Producers Board is working with the universities in Texas to hopefully find funding for some research on organic production.

Everyone agrees that more research on organic peanut production in the West Texas area is needed to improve and grow opportunities in the organic peanut market.[divider]

Seeing a need to bring interested parties together to talk about organic peanut production in West Texas, the Texas Peanut Producers Board held a seminar earlier this year to learn more about the organic process, what it means to stay within organic guidelines for field problems such as weeds and crop disease and find out about any new resources available for organic production.

Shelly Nutt, TPPB executive director, says the West Texas area has developed a great reputation for its peanuts and organic peanuts from this area are known for their outstanding quality.

Bob Whitney, TPPB peanut specialist, says, “The increasing demand and high prices has more and more peanut growers interested in learning about organic peanut production. The Texas Peanut Producers Board recognized the need for education and worked to put together a seminar to help educate growers about production practices, marketing and organic rules.”

According to information from the National Peanut Board’s Ryan Lepicier, a speaker at the meeting, Americans are now spending more than $21 billion on organic consumer packaged goods, including food.

“By all accounts, organic foods are now mainstream and not a passing fad,” he says. New organic peanut product introductions over the past six months show a trend toward snacking and foods that are easy to eat on-the-go.