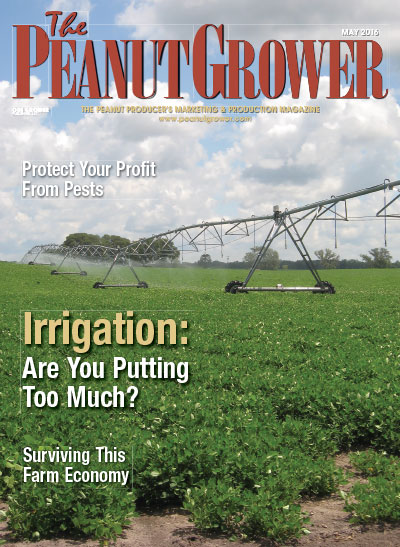 Is your irrigation scheduling method reliable or is it reducing yields?According to USDA’s National Agriculture Statistics Service, peanut producers intend to plant 1.48 million acres in 2016, down 9 percent from the previous year. The slight decrease coincides with a slight increase in planting intentions of acreage to corn and cotton. However, a rainy spring may mean the pendulum swings back toward peanuts just a bit. Unfortunately, very few peanuts are needed because of the oversupply of 2015.

The expected decrease in planted area is largely driven by price concerns due to the large supply of peanuts. Over the last two years, growers increased peanut acres in many states due to relatively low prices of other crops creating a large supply going into the 2016 crop year. Since 2013, the Southeast has increased acres 63 percent, and the total U.S. has increased acreage by 52 percent.

For 2016, Georgia producers are expected to decrease planted area by 7 percent from 2015. All Southeastern states show a decline in acreage intentions for peanuts.

Soybean planted area for 2016 is estimated at 82.2 million acres, down less than 1 percent from last year. Compared with last year, planted acreage intentions are down or unchanged in 23 of the 31 estimating states.

Of this total, about 10.7 million acres are Hard Red Spring wheat. The intended Durum planted area for 2016 is estimated at 2.00 million acres, up 3 percent from the previous year.