Rootworm On The Rise

This damaging pest is typically found in heavier-textured soils with more moisture. 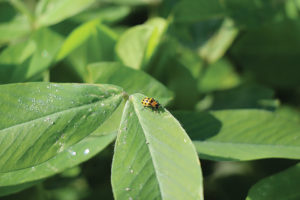 The spotted cucumber beetle, the southern corn rootworm adult, is easily recognized in the field.

The southern corn rootworm is an emerging insect pest in Georgia, according to University of Georgia Extension entomologist Mark Abney. The adult stage, the spotted cucumber beetle, is easily identified. The immature stage is not and may go undetected until peanuts are graded as Segregation 3 because of rootworm damage.

“It is still considered a sporadic pest, but in some areas it is becoming a bigger problem. Growers with high-risk fields and those with a history of SCR infestations should consider the pros and cons of applying granular chlorpyrifos,” Abney says. However, as he points out often, producers are likely to soon lose the one product, Lorsban, that will control it.

SCR requires moist soil conditions and is more typically found in fields with heavy soils and center-pivot irrigation. It can also be a problem in low spots with heavy-textured soils in periods of abundant rainfall.

Following is more information about this pest.

This is a picture of the southern corn rootworm. In the larval stage, it is white or cream colored and 1/2 to 3/4 inch long. The legs are visible on the first three segments behind the head. A dark spot on the abdominal segment can be seen on the right side of the insect.

Larvae of the southern corn rootworm are slender, white or cream colored and may reach a length of 1/2 to 3/4 inch when mature. They have three pairs of inconspicuous legs, and the head and the last segment of the body are dark brown to black.

The adult is the spotted cucumber beetle, a greenish-yellow beetle, approximately 1/4 inch long, with 12 irregular black spots on its back. Rootworms damage peanuts by feeding on all underground parts of the plant, especially the pegs and pods.

The southern corn rootworm is the immature stage of the spotted cucumber beetle. Rootworm larvae develop in the soil and feed directly on pegs and pods.

Eggs and small rootworms cannot survive in dry soil conditions. Therefore, irrigation or a wet weather pattern will favor development of the pest. Adult beetles can be readily detected in peanut fields. Their presence in moderate to high numbers is a warning that a problem could develop.

Finding rootworms in the soil is difficult, and injury is often not detected until after peanuts are dug when it is too late for control measures. Scout for SCR by pulling up plants and examining the roots and pods for feeding injury and sifting through the loose soil to find the larvae. It may be necessary to wash off wet or clay soils to clearly see damaged pods. 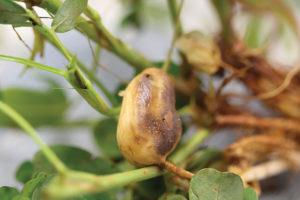 Rapid growth after rain can cause short splits or creases to occur in the outer pod wall that can be confused with SCR damage.
This pest is more likely to be found in low spots and heavier-textured soils under moist conditions or with center-pivot irrigation. Areas with increased loam content in the soil and poor drainage are also at risk of increased pod damage.

Rootworm management options are limited. Granular chlorpyrifos banded over the row is the only treatment proven to be effective against this pest in peanut. According to research conducted in Virginia and North Carolina, preventative insecticide applications made before infestations are established provide good control. There are no foliar insecticide treatments available, and targeting the adult beetle has not been shown to reduce injury or improve yields.

Determine the need to treat on a field-by-field basis. Decisions can be based on both adult populations and past history in peanut fields.

The southern corn rootworm is considered a major pest in North Carolina and Virginia peanuts. However, not all fields need to be treated for SCR.

Virginia Tech’s Tidewater Agricultural Research and Extension Center entomologist Sally Taylor says, “Knowledge of the past history of rootworm injury is useful in determining the need for treatment. If injury has occurred in a field, it will again.

“Keep field records on the extent of pod and peg injury noticed at harvest time. Pay particular attention to fields with higher levels of organic matter and clay. Rootworms have a higher survival rate in those soils due to higher moisture-holding capacity, and injury will typically be more severe than in light soils.”

In the V-C, the Peanut Southern Corn Rootworm Advisory is available to aid producers to determine when fields need treatment. A digital version of the advisory can be found on the Virginia Cooperative Extension’s Publications and Educational Resources website at https://www.pubs.ext.vt.edu/. Click on “Crops” to search the list, or search by publication identification for VCE Publication 444-351. It is also available for download as a PDF.

The advisory is designed to help determine in a few minutes whether fields need an insecticide treatment.