Favorable weather could signal an earlier onset of fungal disease. 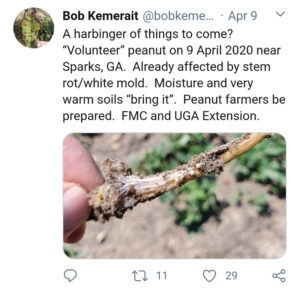 It was the second warmest March on record across the globe according to the National Oceanic and Atmospheric Administration. For the Southeast, the area was classified as much warmer than average. By April, conditions were still warm, and Pam Knox posted on the University of Georgia’s Crop and Soil Sciences “Climate and Agriculture in the Southeast” blog that more precipitation was forecast.

“Wetter conditions than usual are also expected for the next three months in most parts of the Southeast,” Knox says.
Coupled with a mild winter, higher temperatures and more moisture will likely mean an earlier onset of disease.

Already Found In The Field

Bob Kemerait, UGA Extension plant pathologist, says, “Most fungal diseases will be more severe during periods of increased rainfall and of less concern during drier periods. When weather conditions are very favorable for disease, severe epidemics may occur in fields where it was not thought to be a problem.”

White mold, also called stem rot, persists in the soil in its resting stage. Mycelium of Sclerotium rolfsii produces strands of fan-like growth as it spreads. Sclerotia can be seen as small, round structures that are initially white and later become tan to dark brown. White mold can be found in leaf litter or, as Kemerait found in early April, on volunteer peanuts already growing in fields. 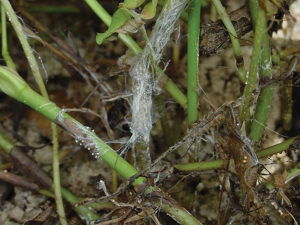 “Management of white mold can be improved by an early season banded application of Proline, by timely irrigation after application and by spraying some fungicides at night,” Kemerait says.

“Staying on time is critical no matter what you do. There are plenty of fungicide options, and new ones may bring new opportunities for control. Don’t be afraid to step outside of what you have always done.

“Be sure to irrigate in 24 hours unless you have received a rain. You need to move the material down the plant. Without moving it down into the crown of the plant, you aren’t going to get the same level of control.”