Set Up For Better Digging

Dialing in both the ground and conveyor speed will help minimize lost pods. 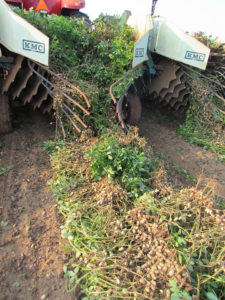 Conveyors traveling too fast tend to prematurely rip vines from the soil; too slow tends to cause the vines to bunch up at the bottom of the conveyor, leading to excessive agitation. Either of these means increased pod losses.

As many Extension specialists and agents will tell you, more revenue can be made or lost during digging than any other aspect of peanut production from seedbed preparation to combining. That’s why digger setup and operation, along with proper timing, is a critical step in the production process.

In these studies, the numbers reported were as dry weight and only those losses considered to be mechanically induced were included. Losses from over maturity and disease were not included in the data set.

In the last few years, Clemson University agricultural engineer Kendall Kirk has worked to improve digging operations by studying both conveyor and ground speed to determine the optimum matchup of the two. The following is information regarding Kirk’s studies and findings.

Amadas Industries and Kelley Manufacturing Co. suggest that the conveyor speed should be matched to your forward travel speed. It is generally assumed that conveyors traveling too fast tend to prematurely rip the vines from the soil, which increases pod losses. It is also assumed that conveyors traveling too slowly tend to cause the vines to bunch up at the bottom of the conveyor, causing excessive agitation of the vines and therefore increased pod losses.

Results from a similar study in 2017 suggested optimum conveyor speeds of 85 percent for both digger brands in Virginia-type peanuts, with significant reductions in yield, greater than 250 pounds per acre, at all higher conveyor speeds tested: 100, 115 and 130 percent.

Similar tests in 2017 in runner-type peanut suggested that optimum conveyor speeds for the KMC digger were 100 to 115 percent, with at least 350 pounds per acre reduction in yield observed from digging at 70 percent, 85 percent or 130 percent.

The results do not refute the manufacturers’ recommendations of matching conveyor speed to ground speed, but suggest that lagging the conveyor slightly in excessive vine growth conditions especially in Virginia-type peanuts, may be beneficial. More testing across a range of soil textures, soil moistures and peanut varieties is being conducted to increase reliability of these recommendations.

How To Conduct A Field Check

A simple way to set the conveyor speed used by many growers is to adjust it until the inverted windrow falls slightly, about 2 feet, down-field from where the plants were growing.

This can be assessed by placing a flag outside of the digger path at the beginning of a set of rows and observing the location of the end of the windrows relative to the flag. This only works well if the digger is engaged at full operating and ground speed prior to entering into the peanut plants.

Current models of Amadas and KMC diggers provide an interface with a digital readout of the conveyor speed in mph, so that hydraulic flow rate can be easily adjusted to match conveyor speed to travel speed.

In absence of a digital readout, an accurate method of setting conveyor speed relative to ground speed can be conducted through simple calculation and setup. Clemson Precision Ag has created a conveyor speed calculator website at the following link: precisionag.sites.clemson.edu/Calculators/PeanutDigger/ConveyorSpeed. 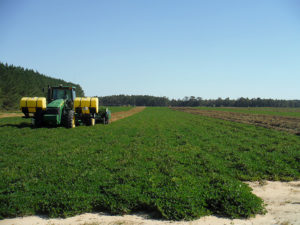 Virginia-type peanuts have more surface area per pod and, therefore, higher drag forces. Because of this, decreased speeds should be used as compared to those used for runner-type peanuts — photo courtesy Clemson University

Driving too quickly can lead to significant losses when digging peanuts, according to a recent study by Clemson University agricultural engineer Kendall Kirk.

Farmers often push digger speeds to save time or to outrace inclement weather, but driving too fast can reduce yield, Kirk says. Conversely, driving too slowly can rip vines apart and increase costs.

“As you drive faster, your operating cost, primarily your labor cost, goes down because you are able to finish the job faster, but the cost of operating your digger more slowly is relatively small compared to your loss in yield when digging at higher speeds,” Kirk says.

A peanut digger unearths peanut plants while a blade at the bottom of a conveyor belt cuts the tap roots and shears the soil to leave the peanut plants on the ground to be picked up later. The speed of this process matters. Peanuts left underground or detached from plant vines cannot be collected.

Digging Is Different By Type

The larger pod Virginia-type peanuts have more surface area per pod and, therefore, higher drag forces, so they are more likely to be ripped from the peg resulting in losses. Because of this, it is reasonable to assume that lower speeds should be used for Virginia-type peanuts, as compared to those used for runner type and other, smaller pod peanuts.

According to his study, optimal ground speed for digging Virginia peanuts is 2-2.5 miles per hour. For each mile per hour above that target speed, digging losses increased 200 pounds per acre.

The average peanut yield in South Carolina last year was 3,300 pounds per acre, according to the National Agricultural Statistics Service. Growers in the state harvested nearly 350 million pounds of peanuts that year at a value of more than $65.7 million. Kirk conducted the study at the request of South Carolina peanut growers looking to optimize profits.

When setting their digging speeds, growers should keep several variables in mind, particularly soil conditions.
“Slower speeds should be used where digging losses are more likely, such as with larger pods, suboptimal maturity, heavier soils and drier soils,” Kirk says. “Driving too slowly will reduce your ability to dig on a timely basis, but driving too fast can cause higher yield losses.”