How to recognize and manage this microscopic predator. 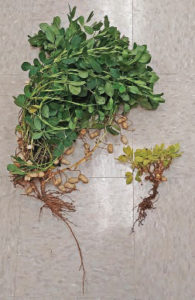 Note the stunted shoot and yellowed foliage in the sting nematode-infected plant (right) versus the healthy plant.

Most agriculture professionals recognize that plant-parasitic nematodes can drag down peanut yield. In the Southeast, peanut nematodes are often assumed to be peanut root-knot nematodes (Meloidogyne arenaria and Meloidogyne javanica) because they are widespread, highly damaging and their symptoms are relatively distinct.

However, Florida peanut growers are dealing with another nematode as well—sting nematode (Belonolaimus longicaudatus).

Sting nematodes are highly damaging to peanuts, with a single nematode detected in a soil sample enough to warrant management. Sting nematodes cause yellowing (chlorosis), stunting or death of plants, resulting in patches with a skippy stand.

These above-ground symptoms are often obvious early in the year, unlike root-knot nematode symptoms that generally appear later in the year from July-August.

Sting nematode does not cause galls, but rather stunts the root system, prunes lateral roots and causes tiny, pin-prick size brown lesions on the pods. This impairs root system function which leads to above-ground symptoms and overall reduced growth.

Recognizing these symptoms on peanut plants is informative as a first step in diagnosing a potential nematode problem.

Patches of stunted, dead, and chlorotic (yellow) peanuts due to sting nematode infection.

However, soil sampling and analysis by a professional nematology lab is needed to confirm which nematodes, if any, may be contributing to poor crop growth.

In addition to the symptoms mentioned above, the fact that sting nematode prefers very sandy soil—typically 90 percent or more sand and little organic matter—can be useful in guiding sampling.

Information about sampling for nematodes, and other considerations for managing nematodes in peanut production, is provided in the UF/IFAS EDIS publication “Management of Plant-Parasitic Nematodes in Florida Peanut Production.”

Growers are encouraged to contact their Extension agent or myself for assistance with sampling. The UF/IFAS Nematode Assay Lab provides free service for Extension Agents submitting nematode samples to diagnose a problem in commercial production with a limited number of samples per grower.

Unfortunately, if nematodes are detected, there is little that can be done for a current crop, but it can be used to guide future management decisions.

Knowing which particular type of nematode is infesting a field will help guide management strategies and improve the chances of success.

For both nematodes, it may be difficult to find an effective rotation because they have wide host ranges, but, for either nematode, some type of rotation is better than continuous monoculture.

For peanut root-knot nematodes, soybean is among the most susceptible rotation crops and should be avoided while cotton is a good rotation crop.

Grasses are highly susceptible to sting nematode, so avoiding grass crops will help manage sting nematode. The efficacy of nematicides is relatively similar for both sting and root-knot nematodes, although sting nematodes are sometimes more affected, and thus more easily managed by nematicides.

The common name sting nematode is generally applied to nematodes in the genus Belonolaimus, particularly Belonolaimus longicaudatus. This is among the most destructive plant-parasitic nematodes to a wide range of plants including agronomic crops, vegetables, turfgrasses, ornamentals, forages and trees.

Feeding by Belonolaimus longicaudatus causes damage to plant roots and limits the ability of roots to take up water and nutrients from the soil. This causes plants to become stunted, wilt and with severe infestation, die.

Belonolaimus longicaudatus is native to the sandy coastal plains of the southeastern United States. It is limited to soils with high sand content, greater than 80 percent sand, and is common in sandy regions along the Gulf of Mexico and Atlantic coasts from Texas to Virginia. Florida is considered to be the point-of-origin for Belonolaimus longicaudatus and exhibits a great deal of diversity in morphology, host preference and genetics in the region.

Belonolaimus longicaudatus is an ectoparasite, meaning that its entire life cycle is spent in the soil and it feeds on plant roots from the outside. Eggs are laid in pairs by the female nematode as rapidly as 10 eggs per 10-15 hours. After a few days, the second-stage juvenile hatches from the egg. 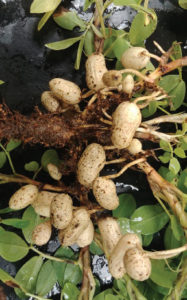 The juvenile nematode feeds on root hairs, and as it matures it will begin to feed on root tips. It will undergo three additional molts into a third-stage juvenile, fourth-stage juvenile, and finally into an adult nematode.

Similarly, Belonolaimus longicaudatus is a quarantine pest in many countries and can greatly impact movement of plant and soil material internationally.

This causes an abbreviated and stubby-looking root system. Because the roots are damaged, they are unable to supply the plant with water and nutrients. Damage from Belonolaimus longicaudatus typically occurs in patches because the nematodes are generally clumped in distribution.