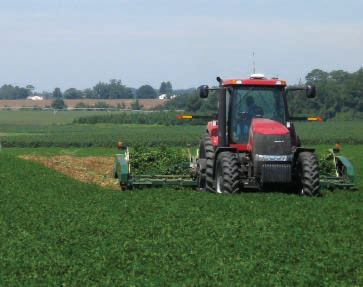 As the 2019 peanut crop gets planted, markets remain quiet. Buyers are aware that carry forward numbers are high and so there is no urgency to book any additional peanuts. Buyers at home and abroad are open to offers of 2019 crop, but most shellers are off the market as farmers are unwilling to contract at the sheller’s offer of mostly $400 per ton for runner peanuts.

There is a different scenario for the 2019 peanut crop in that shellers have not contracted much at planting time. Farmers may contract after planting or may not.

Historically, at this time of year shellers are well contracted, so we are sailing into unknown territory this season. 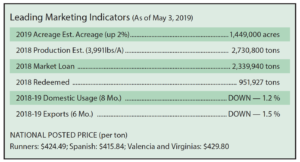 With major buyers enjoying the low prices, shellers know that a higher contract price would encourage over planting, making it more likely that prices will return to 45 cents after harvest.

Shellers are caught in the middle. Farmers are sailing into that unknown market territory with few contracts, but the market loan gives them some protection, especially those coupled with the Price Loss Coverage (PLC) on base acres. The average price of peanuts has been pushed lower and lower and that means a higher PLC payment next October.

USDA estimates peanut growers intend to plant 1.45 million acres in 2019, up 2 percent from 2018. The states expecting an increase in planted area are Alabama, Florida, Georgia, Oklahoma and Texas. In Georgia, the largest peanut-producing state, expected planted area is up 1 percent from 2018. Despite hoping for relief in the form of higher cotton contracts, cotton acreage was expected to be down 2 percent and prices in the mid-70s.

USDA is helping to lower storage totals and carry forward. Trade mitigation took out 5,391,360 pounds of peanut butter set for delivery under Commodity Procurement Program in April, May and June. The Ag Trade Promotion allocated $1.9 million to the American Peanut Council for export trade promotions for the next 3 years in Japan, Columbia and the European Union.

USDA/CCC offered to exchange bulk 2017 forfeited peanuts for commercial peanut butter. The 2017 peanuts totaled 121,684 tons and if CCC can find manufacturing capacity, those peanuts will be out of the system.

The industry is promoting and advertising peanuts as a superfood. Even research shows millennials favor the nutrition of peanuts. Growers will invest about $10.7 million this year in promotion and market development. 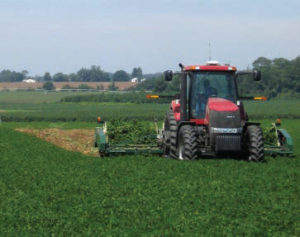 Peanut exports are predicted to decrease only 1.8 percent this year. August 2018 through January 2019 shows a decrease of only 1.5 percent. The European Union buyer is also watching markets. Brazil has a problematic crop and offers are scarce.

China is missing from the buyers list this year.

Argentina has a good crop as harvest gets underway, but it’s never done until harvested and lately bad weather at the end of their harvest can create issues. Argentina recently announced the crop will be 33 percent more than last season. Argentina is aggressive into EU markets even without much competition.

The quality of the 2018 crop is not nearly as good as it could have been for reasons that are still not completely understood. The Southeast crop has quality issues, specifically aflatoxin and damage.

Due to the oversupply and carryout, the market has been able to shrug this off and the shelled goods market remains largely unchanged on USDA for negative material. But supply is going down with USDA buys and hopefully a comeback in U.S. demand.

A flat demand coupled with buyers pricing ideas and combined with the unknown growing conditions, and you end up with a REALLY quiet peanut market.