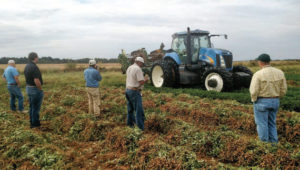 Arkansas farmers planted more than 20,000 acres of peanuts for the third straight year, but this year were enduring a harvest that dragged into December.

“Arkansas peanut farmers planted a little over 25,000 acres, which is the third consecutive year of over 20,000 acres for the state,” says Travis Faske, Extension plant pathologist who also serves as peanut agronomist for the University of Arkansas System Division of Agriculture.

According to the National Agricultural Statistics Service Crop Report for Dec. 2, peanuts were 78 percent harvested. In 2017, harvest had been completed.

“In May, the 2018 crop was planted within a narrow three-week window and conditions were ideal for peanut production, other than it was dry in June and July,” Faske says.

Parts Of Fields Not Dug

“Overall, grades are good and should average in the mid-70s,” Faske says.

October, November and December provided plenty of rain and with “poor water drainage in some fields, a portion of some fields will not be harvested this season,” he said. “This year harvest seems to keep going on and on.”

The top peanut-producing counties in Arkansas include Craighead, Mississippi, Lawrence and Randolph, all in the northeastern part of the state, and Lee in east-central Arkansas.

“Quality was pretty high in the beginning of harvest, but has dropped some, due to the growers not being able to get the peanuts out of the field,” says Mike Andrews, Randolph County Extension staff chair for the Division of Agriculture. “We’d get a half-inch of rain, which would delay harvest for four to five days, then work a few days, then get another little rain event.”

Then the rain, and a little snow and some freezing temperatures, piled up on farmers during November and December.

“This has not been ideal by any means, but that’s the life of a peanut grower,” Andrews says. “Where growers can go in to get their beans and rice, peanut growers can’t go in when it’s wet.”