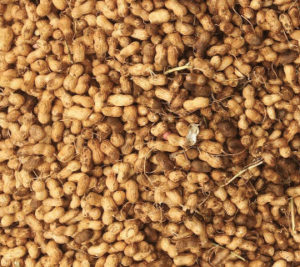 Dry, wet, damaged and delayed – how many different weather events can happen in one season?

Mark Twain once said, “In the Spring, I have counted 136 different kinds of weather inside of 24 hours.” Multiply that by how many days from planting to harvest across the peanut belt, and that’s about how many different weather situations producers had to deal with this past summer. It was tumultuous to say the least.

“It was very dry early and has been very wet late,” she says. “The rains came too late to really help the plants produce peanuts. Wet conditions have also hampered harvests and reduced yields and quality.”

Rain and excessively wet conditions on peanuts and in windrows reduced harvest efficiency and created quality issues, she says.

Producers also faced typical disease pressure including pod rot, but Kimura says she did not hear of any excessive disease issues from producers. “Producers faced several challenges this year, but disease pressure was typical.”

Too Much, Too Little

The Virginia-Carolina region also suffered through many different weather events.

David Jordan, North Carolina Extension peanut specialist says, depending on where you were located, drought, too much water in the summer, and two hurricanes during the fall had a major impact on crops.

“Peanuts took a hit but not like some of our other crops, such as cotton, soybean and tobacco.” Higher costs of production and low commodity prices combined with unpredictable weather have taken their toll on many farmers across the state.

Three weeks of steady rainfall in May delayed the planting of an estimated 45 percent of Georgia’s peanut crop until after May 25. Because of the later planting, more than 200,000 acres of Georgia peanuts were at risk when Hurricane Michael moved through the state on Oct. 10. A rainy November added to harvest problems for Georgia producers.

“When the hurricane came through, it did hurt the crop a little bit, but it’s main and immediate impact was to the industry’s infrastructure in southwest Georgia. It caused us to leave peanuts in the field longer than normal,” Monfort says.

In a survey of 24 Agriculture and Natural Resources Extension agents in Georgia, Monfort found that at that time, peanut losses were close to 20 percent. In the southeast part of the state, this equates to an average loss of 716.6 pounds per acre. In southwest Georgia counties, the estimated average loss is 809 pounds per acre.

Monfort stresses that these losses are just averages. The losses skyrocket in the southwest Georgia counties along Hurricane Michael’s path.

“Those counties in the middle of the storm — Early, Terrell, Miller and Baker — you can tell that those were the hardest hit.

There may have been 800 pounds on average, but the counties in the southwest corridor really got hit for 1,000 to 2,000 pounds per acre,” he says.

Portions of the article provided by Extension media.