What’s Under That Canopy? 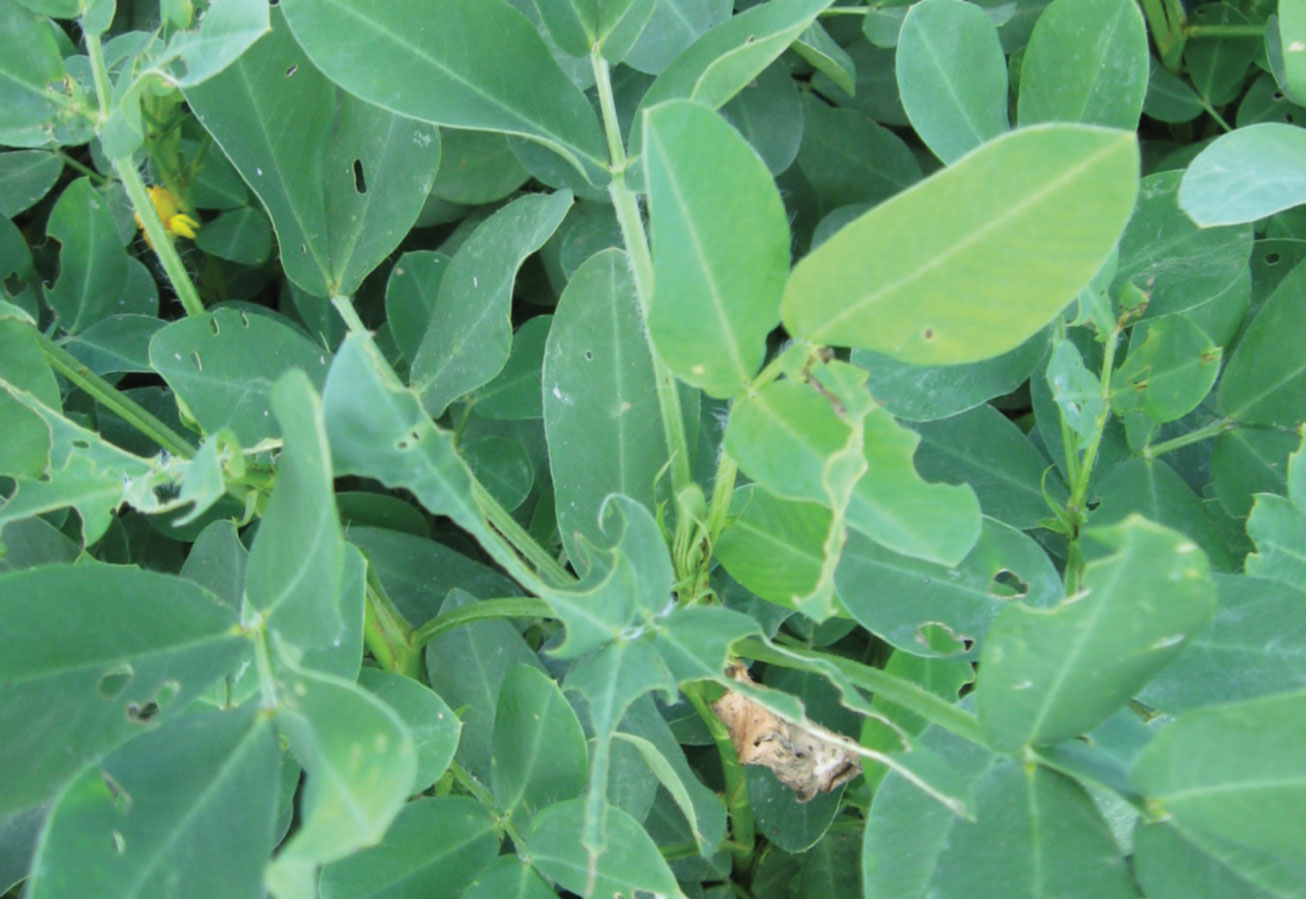 More scouting of fields is needed for effective insect management.

With insect management in peanuts, there are a lot of “if, then” contingencies. If it is hot and dry, then expect to see more lesser cornstalk borer. If you use a pyrethroid in a field where two-spotted spider mite is present, then it usually makes the spider mite problem increase after a brief decline. However, the truth of the matter is many producers are only guessing at what insect problems they may have because no one is actually scouting the fields.

“We are leaving money on the table by not scouting,” says Mark Abney, University of Georgia Extension entomologist. “Regular scouting is the best way to determine if pests are present at damaging levels in peanut.”

A Number Of Observations

“Peanut pests may be sporadic, but they can also be severe,” Abney says. “Current prices make optimizing insect management more important than ever, and scouting is the only way to ensure that insecticides are applied only when needed and that control measures are taken in a timely manner to prevent loss.”

The recommendation not to spray may be the most profitable one your consultant or scout can make, says Abney.

In 2014, several insect pests were more widely observed than in the couple years previous. However, thrips pressure has been on the increase.

“We have had two years of heavy thrips pressure,” Abney says, but instead of seeing it in early May, as it had been in the past, the thrips pressure came in late May and early June. “That’s why you can’t rely on the calendar.”

When scouting for thrips, Abney says that adults will appear one week, then about a week later, the number of immature thrips will rise. Damage peaks in about two weeks, but after a couple of weeks of ideal growing conditions, damage is usually barely noticeable.

“It is important that we continue to use the recommendations found in Peanut Rx for reducing thrips pressure, even though the impact of direct feeding on yield is not well understood, and Tomato Spotted Wilt Virus,” he says.

“Phorate (Thimet) is still the only insecticide that has been shown to reduce TSWV incidence in peanut, and it provides good protection against direct-feeding damage. In-furrow applications of liquid imidacloprid (Admire Pro) have shown good efficacy against thrips in a number of university trials in recent years. To date, seed treatments in peanut have not provided adequate thrips suppression in years with heavy pest pressure,” Abney says.

• Spinetoram, brand name Radiant SC from Dow AgroSciences, has shown efficacy against thrips and caterpillar pests. Radiant acts as contact and stomach poison with translaminar action when applied on foliage. Radiant belongs to Insecticide Resistance Action Committee (IRAC) Class 5, which has a different mode of action from neonicotinoids in class 4. Spinetoram, or Radiant, is more selective and lower-risk insecticide compared to synthetic pyrethroids. Therefore, this insecticide can serve as a rotation partner with pyrethroids when producers want to target a broad range of caterpillar pests.

• Novaluron, brand name Diamond from Makhteshim Agan of North America, Inc. (MANA), is an insect growth regulator, or more specifically a chitinbiosynthesis inhibitor, and is another new product featured in the IPM Guide. An IRAC chemical in class 15, it is only effective against caterpillars, but the earlier caterpillars are detected, the less product will be needed to get adequate control. It can also be used to help space out pyrethroid applications and or reduce usage to prevent spider mite issues during hot dry years.

• Besiege, from Syngenta Crop Protection, is a premix insecticide in peanuts that combines two active ingredients, chlorantraniliprole and lambda-cyhalothrin. At the lower rate of five to eight ounces per acre, it is effective against cutworms, three-cornered alfalfa hopper and velvetbean caterpillars. At a slightly higher rate of six to 10 ounces per acre, it offers protection against thrips, corn earworm and beet armyworm.

For any of the above products, do not use them as “preventive strategy” because they have good knockdown action. Scout crops and identify insects properly before making a treatment decision. Stop insecticide applications once the insect pest is under control and do not do “maintenance sprays” because that could flare up spider mites during hot, dry weather.

Lesser cornstalk borer (LCB) is a sporadic, but destructive pest, and 2014 was an outbreak year. Abney says it is important to scout for LCB because, while LCB are usually present all season and control measures are not needed in most locations in most years, losses to LCB can occur at any time. Spotting that breach of the threshold and timing an insecticide application accordingly is important.

Granular chloropyrifos (Lorsban 15G) is recommended for LCB control, but to be effective, Abney says, this product requires rainfall or irrigation soon after application. And, while back-to-back outbreak years of LCB are not common, the only way to know for certain is to conduct regular scouting.

The same hot, dry conditions that favored lesser cornstalk borer population growth also contributed to very heavy two spotted spider mite (TSSM) pressure in 2014, says Abney. Nonirrigated fields and the dry corners around pivots were commonly infested. Management options for TSSM in peanut are essentially limited to one active ingredient, propargite (Comite). Despite spider mite being listed on the label of pyrethroids, Abney says do not use that product for that pest.

“You will knock them back for a week, but then they will come back with a vengeance,” he says.

“There were many cases of very heavy spider mite pressure in fields where the pyrethroid insecticide bifenthrin was applied either for caterpillar or spider mite control.

Again, regular scouting is recommended to spot even low populations of spider mites.

“By the time plants are covered with mites and webbing and begin to turn yellow/bronze, no chemical treatment is capable of bringing mite populations in check,” Abney says. “Scout regularly and avoid using pyrethroid insecticides in fields where even low populations of spider mites have been observed.” It

All Comes Back To Scouting

Finally, Abney says foliage-feeding caterpillars can always be found in peanuts, but if it is early in the season, it is more likely to be tobacco budworm.

“Larger plants can compensate for a lot of defoliation, whereas smaller plants cannot,” Abney says. “However, too many acres in Georgia are sprayed below threshold for this pest.”

The take-home message is that for effective insect management producers must scout their fields or hire someone to do it to know more about what insect pests are present, if they are near thresholds and, maybe most important, if they are not in need of a wasteful insecticide application.

University of Georgia peanut entomologist, Mark Abney, has asked Georgia’s producers to respond to a survey that will be used to help shape the direction of research and Extension programs.

“Insects, while not a huge problem every year like they were in 2014, can cause significant economic losses each year,” Abney says. “The more information that researchers and Extension specialists at the University of Georgia have regarding the major pest problems growers face, the better off we are.”

The survey, which should only take between five and 15 minutes to complete, features questions about insect pressure, production practices that can influence pest populations and pest management practices used on individual farms.

“It’s very important for us to have that kind of information. For example, if only 10 percent of the peanuts in Georgia are being scouted, we need to know that when we write grants and ask for funding for Extension work to educate growers about the importance of scouting their peanuts. Being able to document IPM practices such as scouting is very important,” Abney says.

“The data we gather from this survey will help us better understand what practices contribute to the risk of insect damage. There are only so many trials that can be conducted at the university each year, and not all insect pests will occur in our research plots,” he says. “Everyone is very busy this time of year, and we appreciate growers taking the time to complete the survey.”

As an added incentive, every person who responds to the survey can enter to win a Stihl MS291 chainsaw. The drawing for the chainsaw will take place on June 30.

The survey can be accessed online through a link on the Georgia Peanut Commission’s website at www.gapeanuts.com. Notifications about the online survey were mailed directly to the more than 3,500 peanut producers in Georgia.

Information provided by University of Georgia College of Agricultural and Environmental Sciences.