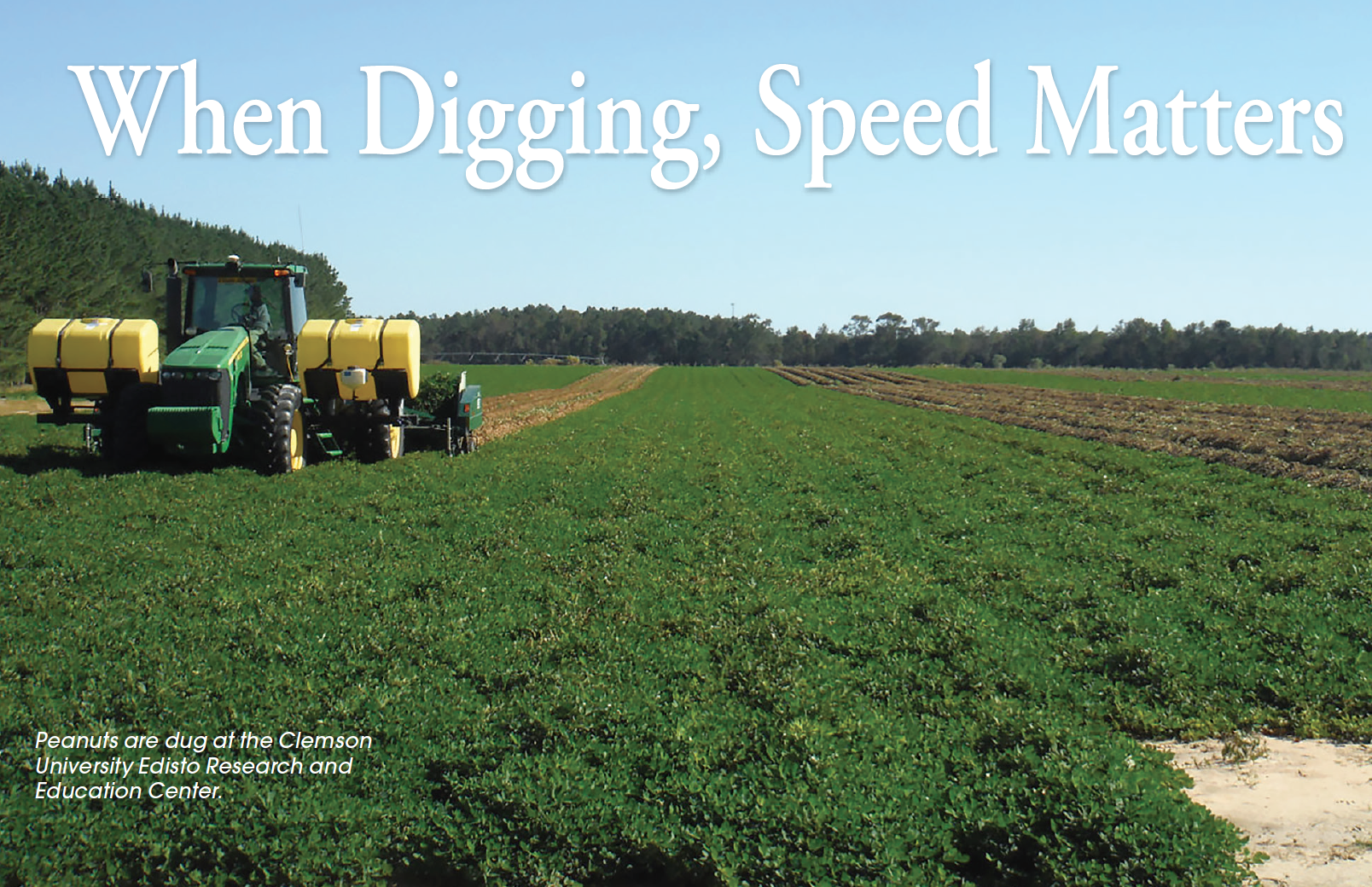 Driving too quickly can lead to significant losses when digging peanuts, according to a recent study by Clemson University agricultural engineer Kendall Kirk.

Farmers often push digger speeds to save time or to outrace inclement weather, but driving too fast can reduce yield, Kirk says. Conversely, driving too slowly can rip vines apart and increase costs.

“As you drive faster, your operating cost, primarily your labor cost, goes down because you are able to finish the job faster, but the cost of operating your digger more slowly is relatively small compared to your loss in yield when digging at higher speeds,” Kirk says.

Establishing Optimal Speed
A peanut digger unearths peanut plants while a blade at the bottom of a conveyor belt cuts the tap roots and shears the soil to leave the peanut plants on the ground to be picked up later. The speed of this process matters. Peanuts left underground or detached from plant vines cannot be collected.

To establish an optimal speed for digging peanuts, Kirk tested various ground and conveyor speeds when digging Virginia-type peanuts at Clemson’s Edisto Research and Education Center in Blackville.
According to his study, optimal ground speed for digging Virginia peanuts is 2-2.5 miles per hour. For each mile per hour above that target speed, digging losses increased 200 pounds per acre.

Synchronize With Equipment
Growers should also synchronize the speed of their digger’s shaker chain, or conveyor belt, to their ground speed. If driving 2 miles per hour, for example, the conveyor belt should be set to a speed of around 2 miles per hour. A conveyor belt running about 20 percent faster than ground speed can result in yield loss of 100 to 200 pounds per acre, Kirk says.
The average peanut yield per acre in South Carolina last year was 3,300 pounds per acre, according to the National Agricultural Statistics Service. Growers in the state harvested nearly 350 million pounds of peanuts that year at a value of more than $65.7 million. Kirk conducted the study at the request of South Carolina peanut growers looking to optimize profits.

When setting their digging speeds, growers should keep several variables in mind, particularly soil conditions.
“Slower speeds should be used where digging losses are more likely, such as with larger pods, suboptimal maturity, heavier soils and drier soils,” Kirk says. “Driving too slowly will reduce your ability to dig on a timely basis, but driving too fast can cause higher yield losses.” PG