Root-knot nematodes are still the primary microscopic pest in peanut, but both sting and lesion nematodes can be found in some areas. 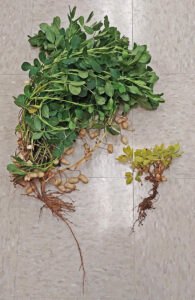 Sting nematode does not cause galls like root-knot nematodes, but rather stunts the root system, prunes lateral roots and causes tiny, pin-prick size brown lesions on the pods. This impairs root system function that leads to above-ground symptoms and overall reduced growth.

Microscopic, voracious, deceptive, invasive, damaging. There are many ways to describe nematodes. In peanut, the most common is the root-knot nematode, although both sting and lesion can be found.

Because nematodes are microscopic and symptoms are often not recognized, they are frequently undermanaged. Producers are losing yield to this destructive pest and should take steps to ensure adequate control.

For nematode management, there are three primary practices: crop rotation, resistant cultivars and nematicide applications.
Rotation with a crop that is not a host for root-knot nematode is always the starting place in management. This is always considered an effective management tool.

“TifNV-HighO/L was released by the U.S. Department of Agriculture Agricultural Research Service in Tifton, Georgia, a few years ago. This variety has the near immunity to nematodes as does Tifguard with the high-oleic oil trait. It also has resistance to tomato spotted wilt virus and is similar in plant and seed characteristics to Tifguard, which is still available to plant.”

Another option, Georgia-14N, was released several years ago by the Georgia Agricultural Experiment Station and developed at the University of Georgia Coastal Plain Experiment Station. It is a small-seeded, runner-type peanut variety that is resistant to spotted wilt and root-knot nematodes. It also has high-oleic oil chemistry.

What To Do In Fields With Heavy Pressure

“TifNV-HighO/L, Tifguard and Georgia 14N all have the same parentage and very strong resistance to root-knot nematodes,” Grabau says. “Plant resistant cultivars in fields with heavy root-knot nematode pressure, and they are going to perform about as well as they would in a field without pressure. 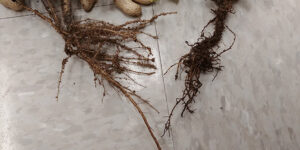 Sting nematode is among the most damaging of all plant-parasitic nematodes. Feeding by this nematode kills the root system.

“Some data we’ve seen over the last couple of years shows that in heavy root-knot nematode fields, you are better off going with a resistant cultivar rather than a nematicide with a susceptible cultivar.

“Under heavy pressure, these are good options for preserving yield. If you have sting or lesion nematodes, the resistant cultivars do not work against these species,” he says.

Recognizing nematode symptoms is a first step in diagnosing a problem. After that, a soil sample and analysis by a professional nematology lab is needed to confirm which nematodes, if any, may be contributing to poor crop growth.

Sting nematodes are as damaging to peanuts as root-knot nematodes, with a single nematode detected in a soil sample enough to warrant management. Sting nematodes cause yellowing (chlorosis), stunting or death of plants, resulting in patches with a skippy stand.

These above-ground symptoms are often obvious early in the year, unlike root-knot nematode symptoms that generally appear later in the year from July-August. Sting nematode also prefers very sandy soil with typically 90% or more sand and little organic matter.

Symptoms of root infection also vary among these nematodes. Root-knot nematode causes distinct galls — irregular swelling — on peanut pods and roots. Sting nematode does not cause galls but rather stunts the root system, prunes lateral roots and causes tiny, pin-prick size brown lesions on the pods. This impairs root system function which leads to above-ground symptoms and overall reduced growth.

A soil sample for nematode analysis should be performed if it is suspected for the symptoms present.

As to nematicide options, Grabau says there are a few options.

“Telon is a fumigant. We have Velum Total, which will be known as Velum going forward and is dropping the imidacloprid from the product. There is also AgLogic, which is the return of aldicarb to the peanut market.” 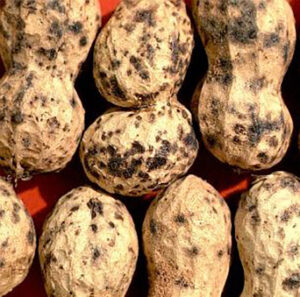 University of Georgia Extension plant pathologist Bob Kemerait says, in Georgia, losses to nematodes are from both the peanut root-knot and lesion.

Although root-knot nematode is the primary type present, Kemerait says, in Georgia, lesion nematode is an emerging problem on peanuts in some areas. Lesion nematodes are often identified by the damage to pegs and pods as small tan spots with dark centers. Weakened pegs commonly cause pods to drop off, and feeding damage permits other organisms to enter the pods.

UF Extension nematologist Zane Grabau made a video demonstrating how to take a nematode analysis soil sample. “Nematode Sampling & Management in Row Crops” can be found under “Cotton Production Videos” at http://nwdistrict.ifas.ufl.edu/phag/2021-row-crop-update-video-presentations/. It is part of the 2021 row crop update from the UF Institute of Food and Agricultural Science Panhandle ag Extension team.

The UF Nematode Assay Lab, a service clinic of the UF IFAS and the Entomology and Nematology Department, also offers information on how to collect and submit samples. It can be found at http://entnemdept.ufl.edu/nematology-assay-lab/ . 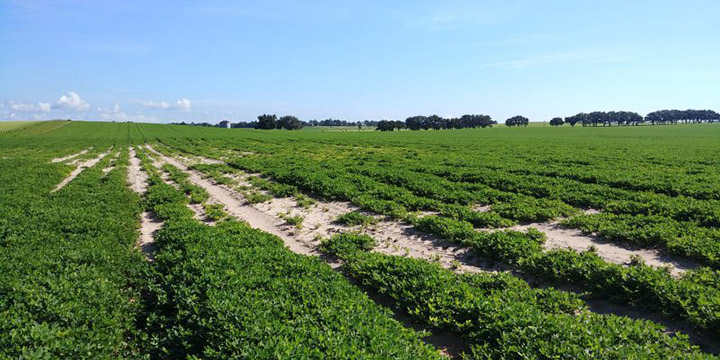 In the Southeast, nematodes found in peanut are often assumed to be root-knot nematodes (Meloidogyne arenaria and Meloidogyne javanica). However, Florida peanut growers may also find sting nematode (Belonolaimus longicaudatus) to be the primary problem in their field.