As COVID-19 spikes a second time, the European Union has announced a 25% tariff on U.S. peanuts and other products. The tariff went into effect on Nov. 10, 2020, as authorized by the World Trade Organization, but the market is still digesting the news and determining its potential impact. The move is a retaliation by the European Union against the United States over government subsidies of Boeing and Airbus.

At the same time, the peanut industry has filed a complaint against the United Kingdom and other countries concerning access due to non-tariff trade barriers including inconsistent sampling and testing methods for aflatoxin and pesticide residues at destination ports.

The direct tariff is another example of the European Union taking steps to limit the ability of U.S. peanuts and agriculture to compete fairly in this key market. In a statement, the U.S. Peanut Federation says, “We firmly believe U.S. peanuts can compete in open, fair and competitive markets. This action by the European Union will make U.S. peanuts 25% more expensive than other origins such as Argentina and Brazil.”

At this moment, Argentina is the only country that can possibly offer peanuts to Europe, given that Brazil is sold out and the tariff has rendered U.S. peanuts non-competitive pricewise.

Peanuts from Argentina’s 2020 crop are 80% to 90% sold. Splits and smaller sizes are the only product remaining; peanuts in the 38/42 size are completely sold out.

The market is now waiting in advance of South American planting. India and China harvested in November with some complications, and prices have increased in the last few months, even though they usually go down during crop time.
Estimations are that Argentina has planted 7% to 10% more area. The outcome of the 2021 crop will depend on the weather.

The market never believed there was a 3.35-million-ton U.S. crop to be gathered and some doubt the latest estimate of 3.32 million tons. Buyers have good coverage for most of 2021 and seem content to wait and see where the final tally stands.

Early indications are that it is excellent quality in the Southeast, especially in regards to aflatoxin. This is welcome news to the industry coming off the 2019 crop. Lack of maturity seems to be plaguing the Southwest and Virginia-Carolina crops. Delays in all three growing areas during harvest hurt grades and potential yields.

The November U.S. peanut production estimate is up 22% from last year. Acreage was reported at 1.6 million acres. However, the November Farm Service Agency report indicated a 63,242-acre increase. The expected U.S. average peanut yield for 2020/21 is 4,093 pounds per acre.

October was another good month for U.S. peanut usage, up 3.1%. Candy manufacturers are betting on the holidays as usage was up 37% compared to 2019. Snacks peanuts were also positive for the month, up 7.8%. Peanut butter slowed after record usage and was down 4% for October. The big news is the continued growth in the peanut and peanut butter sector, up 6.8% for the first three months after posting a 3.3% increase last year. Stocks are down 15% overall and shelled peanut stocks are down 20%. 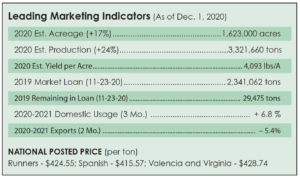 China continues to show interest in U.S. farmer stock at higher prices. That has added to the firmness of the U.S. market. China continues pressure on all origins, buying all the peanut oil available and increasing the price every week. Rumors are that China could be building reserves.

China is also the leader of in-shell peanut market buying from the United States, up 41.9% over 2019. Chinese shipments of raw-shelled peanuts are up 77% over August to September of last year. Canada and Mexico are steady customers ranking first and third in raw-shelled shipments and are top buyers of peanuts butter; however peanut butter shipments are down 17.2%.

Overall, exports of peanuts and peanut butter are down 5.4% for the first two months.

Some producers still have a few uncontracted 2020 peanuts to sell. Runners should sell for at least $450 per ton and Virginias for $500 per ton.

Prices for Southeast runner peanuts have been from the high 40 cents per pound to the low 50s for aflatoxin-negative material with some shellers completely withdrawing from the market waiting on final production figures. In-shell Virginia peanuts remain scarce, and it is difficult to get offers.

Peanut producers are in a good position for the 2021 season. But like every year, the price of peanuts depends on cotton and sometimes corn, which offer competition for the land. Ending stocks are not too burdensome on the market, and most farmers with a peanut base depend on the Price Loss Coverage payment from the previous year to make ends meet.

Another key to the market is the COVID-19 restart of the economy. Will consumers continue to buy peanuts and peanut butter?

We’ve got work to do to get the European Union to lift the 25% tariff on peanuts and peanut products and not give it up to Argentina. Just think, this year we start to work on a new Farm Bill.