All Eyes Will Be On 2019 Planting Intentions 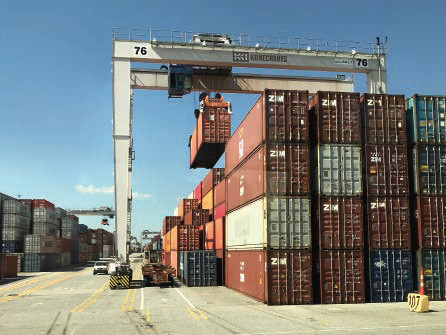 A peanut broker recently told farmers that the price of peanut kernels was indicating to shellers that we will need fewer peanuts in 2019 than was handled in 2018. This is because of weak domestic demand and uncertainty with respect to exports.

That could change, but thus far, the market is urging a cutback. That about sums up the market for next season.

Even with the three major weather events of last season, the crop volume will be sufficient to have a carryover of about 1.2 to 1.3 million tons. USDA has estimated a U.S. peanut crop of 2,735,500 tons.

This would represent a drop of 21.86 percent in acres and 23.27 percent in production. Harvested area is estimated at 1,335,000 acres averaging 4,066 pounds per acre nationwide.

The carryover for next year should go down to 1.3 million tons. If one deducts forfeitures from this number, estimated currently at 120,000 tons for 2017 crop), the carryover would be at best 1,200,000 million farmer-stock tons. 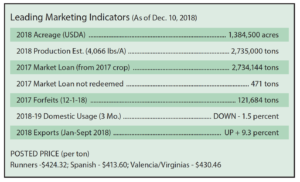 Avoiding forfeitures is a goal of USDA and Commodity Credit Corporation. However, the bumper crop in 2017 and a better than expected crop this past year, plus a slowing demand, have forced shellers and farmers to forfeit 120,000 tons from the 2017 crop. Timing is not good as the peanut program hangs in the balance on the Farm Bill and negative press could impact legislation.

At press time, the CCC had not announced how the peanuts would be sold. Options include crushing as restricted peanut oil, open bid restricted to domestic or export markets, barter system swapping peanuts for peanut butter or peanut paste or do nothing. The fact is that excess, lower-priced peanuts waiting to be sold depress the market. The goal of CCC and USDA is for the sale to cost the American taxpayer as little as possible.

Peanut farms with peanut base received payments caused by lower peanut prices for the 2017 peanut crop. USDA declared the average price to be $458 per ton ($0.2290 per pound). The Farm Bill provides that the reference price for peanuts is $535 per ton ($0.2675 per pound).

To obtain the PLC payment amount, deduct the average price from the reference payment yielding the PLC Payment or $77 per ton. The payment is reduced by 6.6 percent for sequestration. The payment applies to only 85 percent of the peanut farm base. 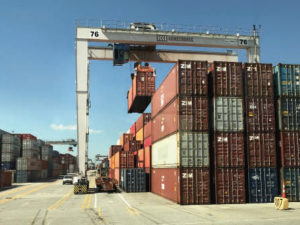 With a carryover of 1.2 million tons from the 2017 crop, the supply is still plentiful. All eyes will be on the plantings for 2019 crop. Cotton prices have gone down to 75/76 cents, but even at those levels some think that it is a better return than a $400 per-ton peanut.

Some analysts think at those prices, U.S. producers could reduce peanut plantings up to 5 percent. Should the price of cotton rally, it could be a 10 to 15 percent reduction.

The quietness of the market combined with a good growing season and excess from the 2017 crop continues to keep prices weak. Domestic market prices for raw shelled peanuts are roughly 46, 47, 48 cents for runner splits, medium and jumbos, respectively. Those holding 2017 crop would probably sell for cheaper than that.

For the first three months of the new marketing year, usage of peanuts was down in candy by 11 percent, snack usage down 2.9 percent and even peanut butter was down 2 percent. Government purchases of peanuts for nutrition programs were down 28.1 percent.

Exports for U.S. peanuts are up 9.3 percent over last year January through September. Canada is the No. 1 customer, followed by Mexico and the Netherlands. China continues to buy with 13.50 percent market share and a volume up 7.71 percent. It was good to see The Netherlands, United Kingdom and Japan with major increases in purchases over last year.

For the entire year, the United States ended up the year down 4.54 percent with 451,100 MT exported versus 472,566 MT a year ago. The increase in exports to the European Union in July pushed exports up for the year by 1.54 percent. U.S. producers can expect exports to the European Union to stay strong for the next year provided the quality of the 2018 crop will allow for it.

Until the trade war between China and the United States is solved, there will not be many shipments there. The only shipments to China might be high oleic, while the others might take place through Haiphong. Farmer-stock shipments will be completely stopped.

Peanut farmers have to work with the local buying point and sheller to produce market demands. Pray that 2018, with its three major weather events, never happens again. Passing a Farm Bill and leveling the trade playing field would also settle some nerves down on the farm.