Growers can successfully manage this disease, and other important diseases, using Peanut Rx. This disease risk index can help growers better understand how careful selection of production practices can reduce the risk to disease losses.

The 2019 version of PEANUT Rx has been fully reviewed and updated by the authors based upon data and observations from the 2018 field season. Changes can be found in the cultivar/variety section of Peanut Rx.

One new variety has been added to the 2019 version of Peanut Rx. AU-NPL 17 has high-oleic oil chemistry with risk points for tomato spotted wilt, leaf spot and white mold all at 15 points.

These varieties have been removed from the index for 2019 because seed is no longer commercially available. Those varieties removed are Florida 07, FloRun™ 107 and Georgia-13M.

Attention to variety selection, planting date, plant population, good crop rotation, tillage, and other factors, has a tremendous impact on the potential for diseases in a field. Portions of Peanut Rx regarding these factors follows.

When tomato spotted wilt virus (TSWV) infects a host plant, it can cause a disease that severely weakens or kills that plant. This particular virus is capable of infecting a large number of plant species to include several that are important crops in the southeastern United States. Peanut, tobacco, tomato and pepper crops have been seriously damaged by TSWV.

The only known method of TSWV transmission is via certain species of thrips that have previously acquired the virus by feeding on infected plants. The factors leading to the rapid spread of this disease in the Southeast are complicated and no single treatment or cultural practice has been found to be a consistently effective control measure. Research continues to identify factors that influence the severity of TSWV in individual peanut fields.

Higher levels of resistance and tolerance are anticipated since peanut breeding programs are now evaluating potential new varieties for response to TSWV. 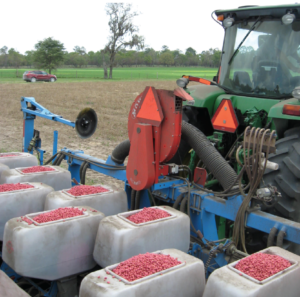 Thrips populations and peanut susceptibility to infection are at their highest in the early spring. The timing of peanut emergence in relation to rapidly changing thrips populations can make a big difference in the incidence of TSWV for the remainder of the season.

Optimum planting dates vary from year to year, but in general, early planted and late-planted peanuts tend to have higher levels of TSWV than peanuts planted in the middle of the planting season. Note: In recent years, peanut planted in the second half of May and in June have been less affected by spotted wilt than in previous years.

An association between “skippy” stands and higher levels of TSWV was noted soon after the disease began to impact peanut production in Georgia. More recently, research has confirmed the impact of plant population on TSWV incidence.

In general, the use of insecticides to control thrips has been an ineffective means of suppressing tomato spotted wilt disease. Despite the overall disappointing results with insecticides, one particular chemical – phorate (Thimet 20G), has demonstrated consistent, low-level suppression of TSWV.

The mechanism of phorate’s TSWV suppression is not known, but the level of thrips control obtained with phorate is not greater than that obtained with other insecticides. Phorate may induce a defense response in the peanut plant that allows the plant to better resist infection or inhibits virus replication.

NOTE: In Peanut Rx, use of Thimet 20G, but not other insecticides, reduces risk of tomato spotted wilt. However this does not mean that other products offer good-to-excellent control of thrips, which is also an important production consideration.

Seven- to ten-inch twin row spacing, utilizing the same seeding rate per acre as single row spacing, has become increasingly popular in Georgia. Research on irrigated peanuts has shown a strong tendency for significantly higher yields, a one to two point increase in grade and reductions in spotted wilt severity that have averaged 25-30 percent. The reason for this reduction in spotted wilt is not fully understood.

Conservation tillage, such as strip tillage, can reduce the amount of disease in a peanut field. Spotted wilt is less severe in strip-tilled fields than in fields with conventional tillage. However, in results from recent field trials, it has been documented that leaf spot is also less severe in strip-tilled fields than in conventionally tilled fields, so long as peanut is not planted in consecutive season.

Although the exact mechanism is currently unknown, the appearance of leaf spot is delayed in strip-tilled fields and the severity at the end of the season is significantly lower than in conventional tillage. Use of conservation tillage does not eliminate the need for fungicides to control leaf spot but helps to insure added disease control from a fungicide program.
Deep turning the soil may help to reduce the threat of white mold by burying initial inoculum.

The effects of Classic on TSWV are minimal compared to the other production practices that influence this disease. Consequently, late-season Florida beggarweed populations that have the potential to reduce harvest efficiency and fungicide spray deposition should be treated with Classic. To date, other peanut herbicides have not been shown to have an influence on spotted wilt.

NOTE: Although not disease related, the University of Georgia now recommends that Classic herbicide not be applied to the Georgia-06G variety. Research conducted by Eric Prostko has determined that use of Classic herbicide is associated with a reduction in yield with this single variety.

Crop rotation is one of the most important tactics to reduce disease severity in peanut production, or any other cropping situation for that matter. The fungal pathogens that cause leaf spot, Rhizoctonia limb rot and white mold survive between peanut crops on debris, as survival structures in the soil and on volunteer peanuts. Time between consecutive peanut crops allows for the degradation of the peanut crop debris, thus depriving the fungal pathogens of a source of nutrition.

Also, fungal survival structures and spores that are present in the soil have a finite period of viability in which to germinate and infect another peanut plant before they are no longer viable. Fields with longer crop rotations will have less pressure from leaf spot diseases, Rhizoctonia limb rot, white mold and, perhaps, CBR, than fields with shorter rotations, or no rotation at all.

Fields where growers have had difficulty managing disease in the past, despite a good fungicide program, are more likely to have disease problems in the future.

Where white mold has been a problem in the past, it can be expected to be again in the future. Rhizoctonia limb rot is a disease that is more sensitive to environmental conditions, especially rainfall and irrigation, than white mold.

Irrigation is a critical component of a production system. However, the water applied to a crop is also beneficial for the fungal pathogens that cause common diseases such as leaf spot, Rhizoctonia limb rot and white mold. Rhizoctonia limb rot is likely to be more severe in irrigated fields with heavy vine growth; the increase in white mold may be less obvious. High soil temperatures as well as moisture from irrigation affect the severity of white mold.