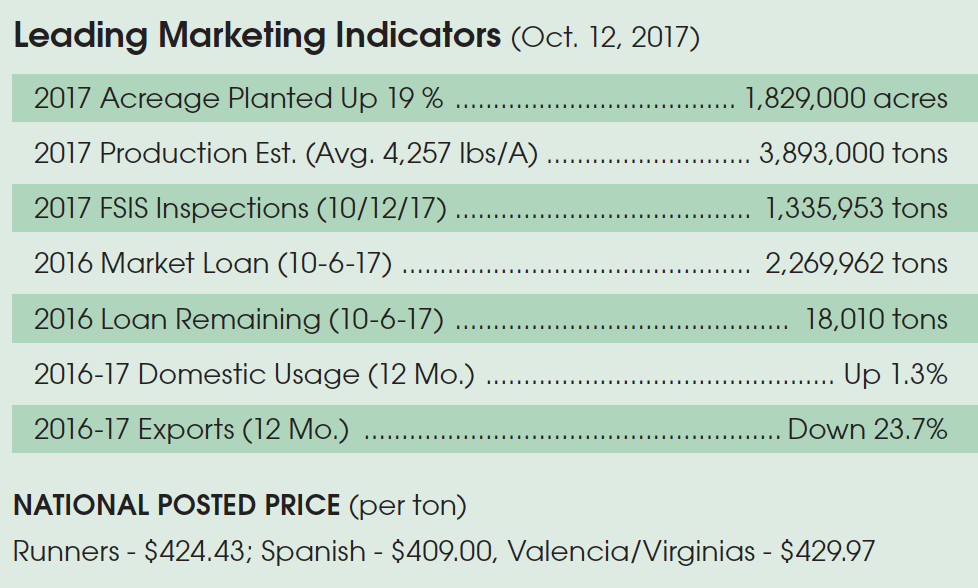 Wow. What a peanut crop! It is difficult to be critical of over production knowing that the world needs your nutritious product to help solve hunger. One in every nine people goes to bed hungry each night. One cannot criticize Mother Nature for blessing the peanut nation with the ideal growing season, which produced a top quality crop. Records were made to be broken, and the peanut producers of America have raised the bar. One cannot blame farmers for responding to markets with better contract prices and poor prices for competing crops.

Record Average Yield Probable
Harvested area is expected to total 1.83 million acres, up 19 percent from 2016. The average yield for the United States is forecast at 4,257 pounds per acre, up three pounds per acre from September and up 623 pounds per acre from the 2016 average yield of 3,634 pounds per acre. The average U.S. yield will be the highest on record if farmers can get them in the warehouse. Based on the current production forecast, season-ending peanut stocks are seen accumulating to a five-year high. Inventories could nearly double to 2.7 billion pounds from the final 2016/17 carryout of 1.44 billion. Carryover To Affect Contracts
Domestic food demand for peanuts in 2017/18 is forecast up only 3.6 percent to 3.2 billion pounds. Strong export demand for U.S. peanuts may continue as well–the level predicted is 1.5 billion pounds (750,000 tons). Ending stocks are sure to impact contracts for next season. With a need of about 500,000 in the carry forward, the industry will have an excess of 1,344,000 tons, over 30 percent of the peanuts needed for next season.
The answer is clear…sell more peanuts at home and abroad or negotiate lower contracts in the spring. Since 2017, contracts were higher and prices for shelled peanuts can only decline so low or the owner will be in jeopardy. The government does not want excess peanuts forfeited to them but if stocks accumulate, loan peanuts may be offered for less than price support. That is a government cost that needs to be avoided while the Farm Bill is being negotiated.

Unfinished Business
When the prospects for a bumper crop became apparent, my prediction that all 2016 peanut tons would be redeemed did not come true. Some shellers had some lower-quality peanuts that they decided to forfeit to the government, about 40,000 tons. But that’s pretty good since loans of 2,269,962 were repaid to the government. The Commodity Credit Corporation will offer those for liquidation/sale in the next couple of months either in a barter or restricted use.
Farmers are looking for their Price Loss Coverage payment for last season. USDA reports that the national average price for marketing year 2016-17 was $394 per ton. When the national average price is below the Farm Bill peanut reference price, farmers are eligible for a payment on 85 percent of the farm base.

With a $535 per-ton reference price and a $394 per-ton average price, farm base will qualify for a $141 per ton payment. The estimated payments are before application of sequestration and other reductions and limits, including adjusted gross income limits and payment limitations. With higher averages on contracts, the PLC payment will be much lower next October for 2017-18 peanuts.

Domestic Market News
Studies on peanut allergies are urging parents to offer peanuts early in life – between four and six months and continue regular consumption to prevent peanut allergies. That is big for the industry, and a lot of doctors and government agencies are supporting and promoting the studies.

USDA reports that peanut usage last year was up 1.3 percent for edible peanuts, with peanut candy up 8 percent, snack peanuts down 7 percent and peanut butter up 3 percent. USDA earlier predicted a 3.4 percent growth rate, but when prices increased for raw peanuts, some manufactures withdrew their advertising campaigns.
The entire peanut industry has embraced the sustainability campaign. The idea of sustainable products and companies has become increasingly important to consumers and particularly the millennial generation. They care about a company’s transparency, consciousness and understanding of health. Peanuts have a tremendous story to tell and all segments are preaching the peanut sustainability story.

Big Question On Exports
Will China be back to buy more American peanuts? Last season, China was the number one buyer of U.S. peanuts. China has dropped to No. 3 (Jan-Aug) behind Canada and Mexico. China is buying U.S.-produced peanuts on a very high level. The USDA says it will continue.

The jump in peanut exports to China actually began just last year. China ramped up its imports during the summer of 2016, with the total imports last year at $172 million. That’s about a 700 percent increase from the $22 million China imported as recently as 2015.

Some Good News
Good news on blanched peanuts, the World Customs Organization (WCO) agreed they are a raw product and tariffs will be much lower. Then there is the Farm Bill. The peanut organizations are united and emphasize maintaining the current PLC program in the 2014 Farm Bill including these key provisions: 1) current reference price for peanuts, 2) separate peanut payment limit as established in the 2002 Farm Bill and 3) storage and handling provisions. Look for approval in early 2018. PG