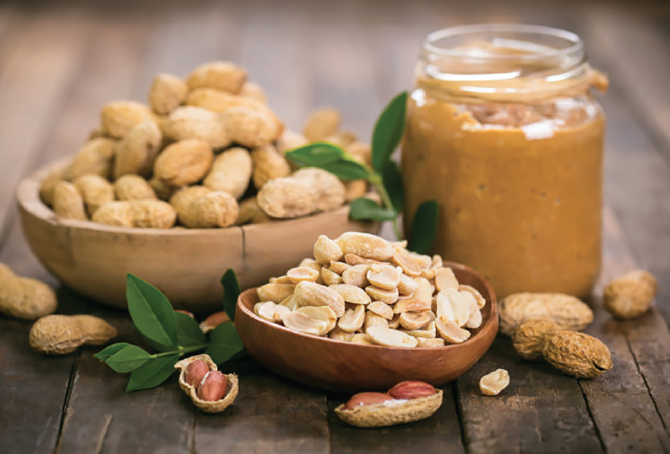 Blanched Peanuts Reclassified
After diligent work from the American Peanut Council, the World Customs Organization has determined that blanched peanuts should be considered as raw product and will be placed under the tariff classification code 12.02 where other raw peanuts are categorized.

The action reverses the decision last September to classify blanched peanuts as “processed,” and thus subject to import duties in many countries. The APC worked to establish a coalition of organizations and countries to oppose this action and reverse the initial decision. The APC appreciates the efforts of everyone who worked toward the change as well as the U.S. Customs and Border Protection for the changed determination.

Work on the project has already begun, but was delayed because of contracting and subcontracting rights, which has since been cleared. Moye said that progress is being made on imaging using a camera to detect damage. With various samples, work is being done on calibrating the imaging machine to specifications from the USDA peanut grading program.

No Change In Damage Allowance
In May 2017, the Peanut Standards Board proposed a rule change that revised the minimum quality standards for domestic and imported peanuts. The Board advised the Secretary of Agriculture to increase the allowance for damaged kernels in farmer-stock peanuts when determining segregation.

The change increased the allowance under Segregation 1 from not more than 2.49 percent to not more than 3.49 percent. Segregation 2 would also be changed accordingly. Comments to the proposed rule change were accepted until June 26.
As of the beginning of harvest of the 2017 peanut crop, there has been no statement from USDA on the recommended change and if and when it will be implemented. Although it took quite a while to confirm the Secretary of Agriculture, reports are that Sec. Perdue has signed the recommendation. Some producers are disappointed that the change was not in the guidelines this season and hope they will be implemented next season.

During the visit to Washington D.C., the House passed a fiscal 2018 budget resolution that would require a $10 billion cut in agriculture spending. The Senate version of the resolution would require no cuts to the Farm Bill, and Chairman Mike Conaway of Texas expects that to be the case in the final budget.

Conaway believes that the cut will disappear during negotiations with the Senate. The bill’s architects on the Senate and House Ag Committees were hoping to convince Budget Committee leaders to increase funding to help revamp cotton and dairy supports and tweak the subsidy system for grain farmers.

Nearly 80 percent of the projected spending on the current 2014 Farm Bill is for nutrition programs. That leaves roughly $6 billion per year for conservation programs, $8 billion for crop insurance, $5 billion for commodity programs and $1 billion for other programs.

As for date of approval of the Farm Bill, Rep. Conaway wants a bill on the President’s desk by Christmas, but others predict late February or March of 2018. There is some speculation that party conflicts could result in a one-year extension.

Easy Introduction Of Peanuts
The FDA recently approved the first commercial product, Hello, Peanut!, to help parents introduce peanut foods into the diets of their children. The Hello, Peanut! introduction kit offers packets of peanut powder blended with oat to be mixed with other foods, hot or cold, and given in increasing quantities for seven days, as long as children tolerate it well. After which maintenance packets are recommended for use up to three times a week. The introduction kit is $25, and the maintenance kit sells for $20 for eight packets.

Having convenient, infant-safe foods available is a positive step toward making early introduction of peanut foods easier for parents and infants. Yet, introducing peanut foods requires no special foods. Peanut butter, which is found in 90 percent of households, or powdered peanut butter is also available in most supermarkets.

Stirring two teaspoons of peanut butter or powdered peanut butter into two tablespoons of applesauce, infant cereal or thinning with the same amount of breastmilk or formula creates a safe and tasty mix to feed babies. Whole peanuts or unthinned peanut butter are not safe and may cause choking in infants.

NPB Strategy Using $10.6 Million
The FY-18 program of work continues to implement NPB’s strategic plan by improving the economic condition of USA peanut farmers and their families through compelling promotion and ground-breaking research.

An overarching strategy for FY-18 will be to connect and engage with millennial parents emphasizing the new NIAID guidelines recommending the introduction of peanut to infants.

“The NIAID guidelines are the best news to come out of the allergy community to date,” says Bob Parker, president and CEO of the National Peanut Board. “The new guidelines have the potential to dramatically reduce the incidence of peanut allergies in the future, so we’ve made education, support and promotion of early introduction a top priority.”

An NPB study found that just 44 percent of young parents say they have heard the guidelines.
Also for FY-18, the Peanut Vendor (@PeanutsHere) will continue to share fun and relatable content with millennial consumers on Twitter and Instagram, while NPB’s business development, college dining and production research programs will continue to be priorities.

The Outstanding Georgia Young Peanut Farmer Award is based upon the applicant’s overall farm operation; environmental and stewardship practices; and leadership, civic, church, and community service activities.
“We have so many young peanut farmers making a difference in their communities, and I consider this awards program a great opportunity to recognize one young peanut farmer for their contributions to the agricultural industry,” says Armond Morris, GPC chairman.

The award is open for any active Georgia peanut farmer who is not over 45 years of age as of Jan. 18, 2018. An individual may receive the award only once. There is no limit on the number of applicants from each county.
Applications are due to the GPC office by Dec. 15, 2017. The application is available on the GPC website at gapeanuts.com or by calling the GPC office at 229-386-3470.

The award winner receives registration and hotel accommodations to attend the Southern Peanut Growers Conference in July 19-21, 2018, at the Sandestin Golf and Beach Resort, Miramar Beach, Fla., and a sign to display at his or her farm.

Promoting The Peanut Program
The Southern Peanut Farmers Federation recently launched a campaign website, www.PeanutProgram
Works.com, and video to showcase the benefits of the Price Loss Coverage (PLC) program in the 2014 Farm Bill and highlight its importance to farmers, their families and communities. The website, through a series of farmer profiles, an informational video and fact points, demonstrates how peanut farmers rely on the stability brought to their market through the peanut program and why it should be retained in the upcoming Farm Bill.

According to the SPFF, the peanut program is a sound, market-based solution that offers farmers a necessary price floor to support continued stability and access to lending, regardless of what is happening in the larger market. The program also helps to meet the ever-increasing demand for peanuts both domestically and internationally. Peanuts have seen continued per-capita consumption growth for years, jumping from 6.60 pounds per capita to 7.41 between 2012 and 2016. The approved qualified health claim is as follows: “For most infants with severe eczema and/or egg allergy who are already eating solid foods, introducing foods containing ground peanuts between four and 10 months of age and continuing consumption may reduce the risk of developing peanut allergy by five years of age. FDA has determined, however, that the evidence supporting this claim is limited to one study.

The claim goes on to say that if your infant has severe eczema and/or egg allergy, check with your infant’s healthcare provider before feeding foods containing ground peanuts. Producers can fine-tune their farming operation with information gained at the 42nd Annual Georgia Peanut Farm Show and Conference, held at the University of Georgia Tifton Campus Conference Center, Jan. 18, 2018, from 8:30 a.m. to 2:30 p.m. Peanut farmers and those involved in the peanut industry will be able to learn more about the latest products, services and peanut research. The show is sponsored and coordinated by the Georgia Peanut Commission.

The one-day show offers farmers a full day to view the products and services of more than 100 exhibitors and a day of education. A free luncheon begins at noon for those in attendance and peanut producers will have an opportunity to win more than $40,000 in door prizes.

The University of Georgia’s production seminar is from 9 a.m. until 10:30 a.m., followed by an industry seed seminar from 10:35 to 11:35 a.m. sponsored by the American Peanut Shellers Association Committee on Variety & Seed Development, The Peanut Foundation, Southern Peanut Farmers Federation and the Georgia Peanut Commission. Growers will be able to learn about farm-saved seed and peanut varieties for 2018. The Georgia Peanut Commission’s program begins at 12:15 p.m.

Producers can earn credit toward their private or commercial pesticide applicator certification.
The Georgia Peanut Commission, in cooperation with One Blood, will also hold a blood drive from 9 a.m. to 2 p.m. during the show.