Do we have a bigger, better, safer industry than ever before? 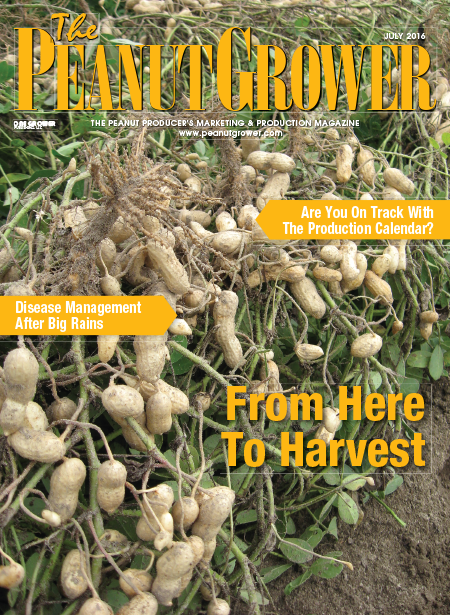 The peanut program, a very small part of the much larger Farm Bill, strives to help the farmer through the Market Loan program allowing the farmer to place peanuts in the loan warehouse for a minimum of $355 per ton and sell within nine months to the sheller as the sheller repays the $355 per ton loan.

China has experienced a growing demand for premium quality peanuts and low-quality peanuts for crushing into peanut oil. Now, China is turning into a major importer, and imports are estimated at more than 280,000 tons this year. Chinese exports fell from 900,000 tons in 2006/07 to an estimated 500,000 tons in 2015/16. Trade reports higher prices at home and low inventory.

India is also having trouble this season. Exports from India are down 32 percent in 2015/16 with higher prices followed by a ban by Vietnam because of quality issues coupled with a poor monsoon season last year that reduced production.

Argentina reports weather problems as high relative humidity, overcast skies and some scattered showers, even an early frost, have made peanut harvesting almost impossible with some peanuts remaining on the ground 30 to 40 days. Losses could be as high as 25 percent of production. It has caused them to withdraw from the market until they know more about quality and quantity.

The United States is today the lowest-cost producer of peanuts and has the acreage and resources to expand production. The industry has an evolved market structure and is advanced in its seed technology, which helps to keep the industry very competitive. A steady rise in production and exports is expected in the future to meet the increased demand in emerging markets such as China and India. The U.S. peanut industry was estimated to have about 1,492,000 tons carryforward into 2016/17, and USDA predicted exports to increase about 15 percent to over 660,000 tons. The FSA report Jan-Apr 2016 shows a peanut export surge up 42.9 percent over the previous year. One market certainty is that peanut exports have absorbed a major portion of the excess peanuts.

Some analysts believe the peanut acreage is higher than the 9 percent reduction. Georgia was estimated 7 percent less than last season, but prices of other commodities have caused more peanut acreage. The next acreage report will be about Aug. 15 with a farmer-acreage reporting deadline of July 15.

All peanut categories were up for the month of April, averaging up 17.7 percent, which is unbelievable in the food world. For the 9 months, peanut candy is up about 1 percent, peanut snacks up 22.4 percent and peanut butter down 3.6 percent. Overall, usage is up 2.7 percent for raw-shelled peanuts. The government continues to buy peanuts and peanut products, now up 33 percent over last year.

Peanuts are the cheapest and best source of vegetable protein and stack well with all other nuts in terms of health and wellness benefits. The peanut industry is well-poised to capitalize on the growing demand for nuts.

USDA loan data balances are not correct because of system migration and essential upgrades, which could impact markets when updated in early July. Markets may not have as many peanuts as thought!

Last year on Aug. 24, USDA dropped the repayment rate $100 per ton below loan to minimize the accumulation of stocks of peanuts by the federal government and to minimize costs and encourage free marketing at home and abroad. The 60-day lock price program almost cleared the loan, and now with similar loan volume as last year, will USDA lower the repayment rate? This thought is already impacting markets.

Contracting with growers has improved as some shellers have negotiated price more and even requested that growers increase acres at some buying points, which had previously been limited.

The PLC (Price Loss Coverage) payment could be $150 per ton ($535 – $355) on 85 percent of farm base minus the budget reconciliation. Farmers with generic cotton base likely planted peanuts.

Recently, a peanut industry leader said that the U.S. peanut industry is bigger, better and safer today. The new peanut program, with the generic base and peanut base, has caused farmers to rethink strategies and markets. It would be nice if other commodities could also improve to help with rotation and diversity, creating a better overall ag picture and reducing program costs. The world is knocking at our door, let’s figure a way to sell ‘em some peanuts. In the U.S., keep promoting and eating peanuts and peanut butter.