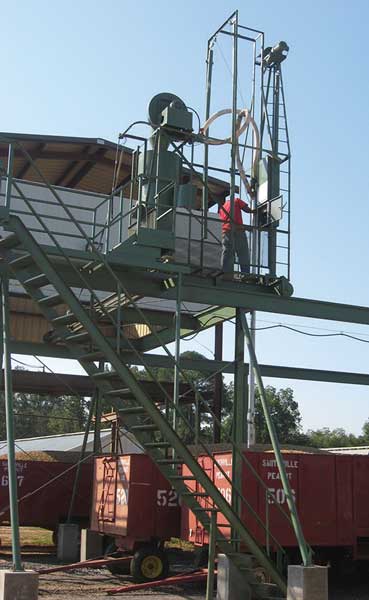 [dropcap]D[/dropcap]own on the family peanut farm, there is much unhappiness. Commodity prices are the lowest in two decades; peanut contracts are at or below the cost of production, and that’s if you can find one. Input costs were higher than last year, and the peanut program regulations have been almost impossible to fully understand. Just trying to survive, too many peanuts were planted, and now Mother Nature is trying to even the score.

If that isn’t enough, the Farm Bill eliminated cotton base to piggyback with peanuts. More insult to injury? Loan peanuts are being redeemed at $100 per-ton below loan level and now that is charged against the payment limit. No doubt, all this is enough to make the producer quit or at least go on an extended vacation.

While the 2015 peanut crop was being planted, the industry was trying to move the 2014 peanut crop. Western peanut farmers, especially in Oklahoma, were faced with the bankruptcy of Texoma Peanut Company, but USDA and other shellers came to the rescue and helped the farmers survive.

By August, USDA noted that 326,000 tons remained in the loan, and 6,647 tons had already been forfeited. The peanut program states that the Secretary may set the rate to minimize potential loan forfeitures and the accumulation of peanut stocks by the federal government, plus minimizing the cost incurred by the federal government in storing peanuts. This worked for USDA, but there was a problem. The difference in this new Farm Bill is that the “market gain” after paying the loan ($355- $255 = $100 per ton) will be applied to the farmer’s $125,000 individual payment limit for the crop year since the farmer has retained “beneficial interest,” while the buyer got the savings.

Farmers with peanuts already redeemed or not in the loan were not affected. But for some farmers with a share of the 300,000 tons of 2014 loan peanuts, the impact could be a major blow.

Forfeitures are not subject to the payment limit, hence some farmers, who were understandably trying to not exceed the $125,000 payment limit, wanted shellers to forfeit their peanuts. And that’s exactly what USDA had hoped to avoid.

At planting time, peanuts were the best option under the Price Loss Coverage (PLC) program when compared to other commodities. Economists told producers that if the average price is $440 per ton or 22 cents per pound, the farm base would receive about $100 per ton. The PLC payment applies to 85 percent of the base and will likely face a 7.3 percent sequestration reduction, reducing the payment to about $75 per ton.

Producers increased acreage 22.7 percent up to 1,601,718 acres versus 1,305,493 acres last year. The big surprise was Georgia was up 33 percent. Texas acreage was up 36.6 percent in traditional cotton-growing areas because, in this Farm Bill, the old cotton base became a generic base and could be applied proportionally as peanut base, but it had to be planted. The base change encouraged more peanut planting. Most states experienced a wetter- than-normal growing season and, coupled with new, higher-yielding varieties, the 2015 peanut crop estimate was astounding. USDA estimated 1,601,718 acres of peanuts averaging 3,996 pounds per acre or a crop of 3,200,232 tons, a modern record. The crop potential essentially pushed prices lower, but also pushed the need to get new storage space approved by USDA for loan peanuts.

Growth in peanut demand will not keep pace with the supply. Limits on domestic shelling capacity and storage will make it even more crucial to broaden export markets this year. U.S. peanut exports in 2015/16 are hoped to exceed last year’s total by more than 100 million pounds and nearly matching the 2012/13 record at 1.19 billion pounds.

The predicted bumper crop in the United States has been damaged by Mother Nature bringing wet conditions and flooding as peanut harvest opened in September. A misty, low pressure visited Georgia, Alabama and Florida for three weeks in late September, and then Hurricane Joaquin added flooding to sections of South Carolina and North Carolina.

Sunshine finally returned the first week in October. However, losses are expected in quality and quantity in all three growing regions. Dryland peanuts have suffered especially and grades are lower with some aflatoxin reported by inspectors.

As one sheller noted, “Right now, we are trying to quickly harvest this crop before we get more rain. We anticipate having lots of peanuts, but weather has reduced volume, and quality is certain to be damaged. Never seen a peanut harvest quite like this!”