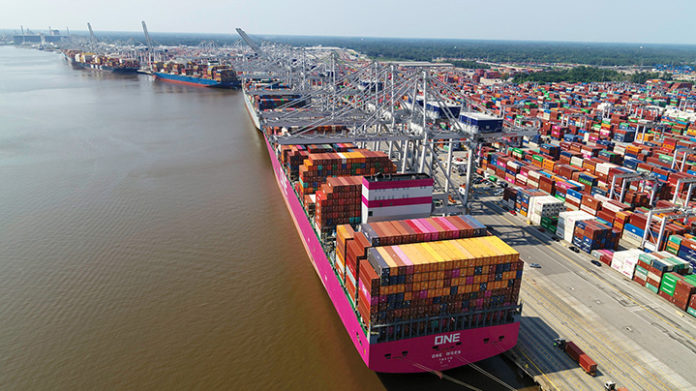 Peanut markets have improved this year, and the potential prospects for a profit are also positive. However, Mother Nature had other ideas and kept chipping away at maximum production.

The increased sheller competition has helped boost prices for farmers along with higher prices for other farm crops such as cotton and corn. Premiums are being offered at harvest in hopes they’ll be able to retain the grower next season against the competition.

A U.S. seller says that “we don’t have any quality concerns at this stage, and with the lack of interest we are seeing from China, I think the volume of supply available domestically will be ample this season.”

Demand from China for farmer-stock has been nonexistent for some time with reports that they have enough supply for crushing from both imported and domestic material. Sustained high prices in China are related to freight costs rather than availability of raw material. So far, ocean rates from the Southeast have not changed as much as Argentina and Brazil are now experiencing, not to speak of Asia.

This past season was a tight market on inshells, Virginia extra-large kernels and Spanish-type peanuts. Demand for these grades is expected to continue to keep the market tight and at a higher price level. Raw runners will be competitive with Argentine or Brazilian origin but not so much on blanched peanuts.

The cost to ship a container has increased between 300% and 500% in the past two years. U.S. producers are losing from 10%-40% of their export value to these added costs, and an informal survey suggests that the inability to export is leading to a loss of 22% of their sales for U.S. agriculture.

Since early 2021, agricultural exporters have been facing unprecedented challenges in securing shipping container space on ocean vessels while contending with an accumulation of exorbitant detention and demurrage fees. Officials expect the shipping problem to continue. 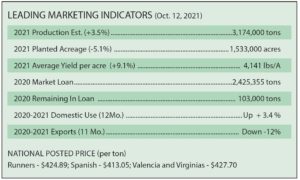 Market demand or disappearance totals 3.199 million tons, a 1% decrease from last year as carryforward may be used. Domestic food usage is forecast to be up 3%. Exports are expected to decrease by 1.2% to 700,000 tons. Crushing for oil, seed and residual dropped 12%. Ending stocks will be 1.02 million tons, down from last month’s 1.135 million tons.

The effective reference price for peanut is 26.75 cents per pound or $535 per ton. The higher of the loan rate (17.75 cents per pound or $355 per ton) or market price average ($420 per ton) is deducted from the reference price for $535 per ton and that becomes the PLC payment of $115 per ton. This payment is applied to 85% of the peanut farm base. The Farm Service Agency will verify and make the payments.

For manufacturers, the market continues at approximately 53 cents for splits, 54 to 55 cents for mediums and 56 cents for jumbo runners, much higher for large-kernel Virginias and for Spanish if you can find anything.

Stocks and Processing is reporting peanut usage down 5.3% with peanut butter showing a major decline of 9.6% during the month. Analysts had estimated that usage would decline after the pandemic and people returned to work. The category posted an increase of 2.7% for peanut butter last year and a market growth of 3.4% for edible peanuts.

Other factors impacting the downward numbers domestically include labor shortages and COVID. Logistical supply chain issues such as difficulty getting stabilizer and other ingredients have also been reported.

The United States is in the middle of an unprecedented maritime transportation crisis as a consequence of COVID-19 and the management of the U.S. economy. The world is trying to adapt to this new situation with no short-term answers. Officials expect a major impact on U.S. peanut exports. A good quality crop with no aflatoxin would encourage return customers but would shipping be available?

Canada and Mexico are strong markets with an increase in purchases of 20% on raw-shelled peanuts in July. Even peanut butter showed strong markets. Since a ship isn’t needed for these markets, trucks and trains give the United States the advantage. All things considered, a 12% drop in total exports for the year is not too bad during the pandemic. PG