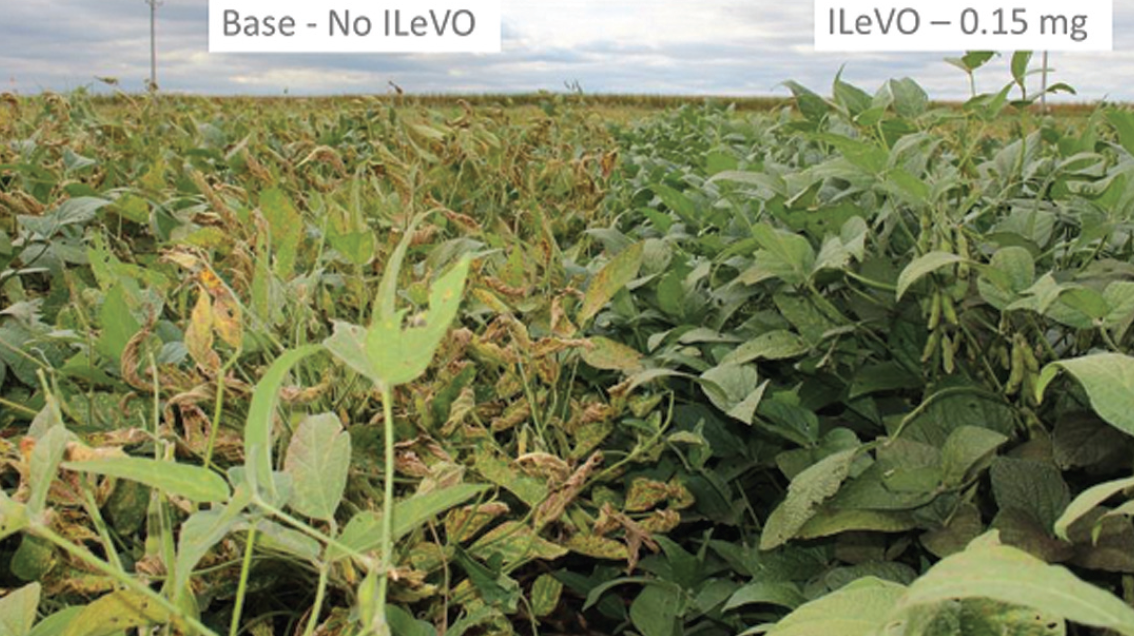 Seed Treatment Now Registered
Bayer CropScience recently announced the EPA registration of ILeVO, the only seed treatment that protects the root systems of soybean plants against infections caused by the Sudden Death Syndrome fungus and has activity against dangerous nematodes in the seed zone.

Soybean growers are constantly looking for ways to protect their crops from the fungus that causes Soybean Sudden Death Syndrome (SDS) and nematodes, specifically the Soybean Cyst Nematode (SCN) – two of the top five soybean yield-robbing pests. In 2014, environmental conditions were such that growers experienced higher-than-normal pressure from SDS. Until now, there was no seed treatment available to protect soybean plants against both SDS and nematodes.

In trials from 2011 to 2014, ILeVO was used on 181 fields with visual symptoms of SDS. Yield benefits ranged from four to10 bushels per acre over untreated seeds with visual SDS symptoms. Even when visual symptoms are not present, the results estimated growers could see an average yield increase of two bushels per acre when using ILeVO as part of an early season management approach.

ILeVO and Poncho/VOTiVO combine for unmatched root and plant protection with three modes of action against earlyseason fungus, insects and nematodes to deliver higher yield potential. ILeVO seed treatment is applied to the seed, which means less direct exposure to the environment compared to other crop protection methods of application. ILeVO is available for the 2015 growing season. Irrigation Exchange allows for data retrieval, data-based decision-making and implementation through mechanized irrigation during the most critical phase – the growing season. It also gives growers complete control over their data and who has access to it.

Although an abundance of precision ag data is available, it is difficult to aggregate the information into sound conclusions and execution because various OEM management systems reside on different platforms, websites and cloud-based servers. Irrigation Exchange overcomes those obstacles. Irrigation Exchange effectively puts the grower in command of the most powerful stream of irrigation data ever developed.

Domark Fungicide From Gowan
Gowan USA recently announced the exclusive distribution of Gowan-branded Domark 230ME fungicide for use on corn and soybeans. Domark is based on the active ingredient tetraconazole which has been successfully controlling diseases for several years on soybeans and corn.

More recently, tetraconazole was included in a premix with azoxystrobin for use on corn and soybeans as Affiance fungicide launched in 2014. Gowan will exclusively distribute Domark through its partnership with Isagro S.p.A.

Domark has been used on soybeans for years for the control of white mold, Asian soybean rust and frogeye leaf spot, which is quickly becoming a serious disease problem for several soybean growers. In 2012, Domark was granted a label for use on corn to control several problematic diseases such as common and southern rust, northern corn leaf blight and spot, southern corn leaf blight, gray leaf spot and eye spot. For more information on this product, go to www.gowanco.com.