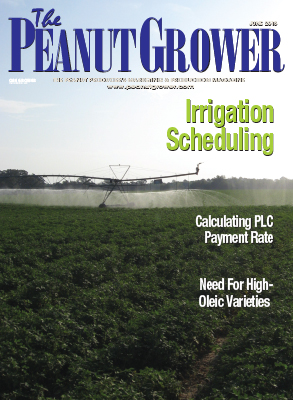 The Georgia Federal Station Inspection Service has initiated a project with the goal of improving and enhancing grading equipment and procedures that have been in use for the past 70 years while continuing to achieve the same end result. Officials say they believe a more efficient and economical method for grading farmer-stock peanuts can be found.

A committee of 10 individuals has been appointed by James Sutton, Georgia FSIS chairman, with John Harrell being named chairman of the New Grading Equipment and Procedures Committee. The committee represents all aspects of the peanut industry and will oversee and administer the project.

“During his time as president of ADM Crop Risk Services, we saw how Greg’s focus on strong relationships, great customer service and innovative thinking could grow a business,” said Matt Jansen, ADM senior vice president and president, Oilseeds. “His experience across businesses at ADM and his drive and enthusiasm for great service and great results will serve him well as Golden Peanut and Tree Nuts continues to look for opportunities to grow their portfolio and expand their geographic reach.”

Mills joined ADM in 1993 and has held a wide variety of leadership positions throughout the business. Prior to this appointment, he served as president of ADM Crop Risk Services, where he was responsible for overseeing all crop insurance- related aspects of ADM’s risk management platform for U.S. farmers. He holds a bachelor’s degree in Agricultural Business from the University of Wisconsin and an MBA from Millikin University in Decatur, Illinois.

Golden Peanut and Tree Nuts, a subsidiary of Archer Daniels Midland Company, is a leading handler, processor and exporter of peanuts and tree nuts. Headquartered in Alpharetta, Ga., the company has 13 processing facilities in the U.S., one in Argentina and three in South Africa.

A group of industry representatives including Bob Parker of the National Peanut Board, Jeff Johnson of Birdsong Peanuts, Tony Gunter of Golden Peanut and Tree Nut Company, John Powell of the American Peanut Shellers Association and Don Koehler of the Georgia Peanut Commission visited China in April on a trade mission organized by the American Peanut Council.

The group visited with the Beijing Chamber of Commerce to learn more about what the organization is doing to promote peanut nutrition inside China. They also stopped by the agricultural trade office at the U.S. embassy in Beijing. The peanut ambassadors flew to Qingdao in Shandong province where they visited peanut processors and growers and met with members of the Qingdoa Peanut Association. The purpose of the trip was to gather information about the potential for China as a long-term trading partner.

The spring weather pattern brought wetter-than-normal conditions, which weather officials say is because of the current El Nino influence. The National Oceanic and Atmospheric Administration’s Climate Prediction Center indicates that the rainfall prediction for summer indicates no trend towards above- or below-normal values, but long-term trends indicate slightly increased chances of above normal temperatures through the peak growing season.

If the El Nino continues, climatologist said we expect a lower number of tropical storms than usual in the Atlantic, which could lead to dryness in late summer and fall when tropical storms often provide timely moisture to Southeastern fields.

For more information, visit the website http://gaclimate.com. Pam Knox, University of Georgia agricultural climatologist, offers the blog, “Climate and Agriculture in the Southeast” through the University of Georgia Crop and Soil Sciences Department as a service to Extension agents and agricultural producers across the Southeast U.S. The blog can be found at http://blog.extension. uga.edu/climate.

Georgia peanut farmers reaffirmed the Georgia Peanut Commission (GPC) by a vote of 92.41 percent during the recent referendum held in March and April.

“I appreciate the farmer’s confidence in the commission, and we are committed to continue earning that confidence,” says Armond Morris, peanut farmer from Ocilla, Ga., and GPC chairman. “The commission continues to work together as a partnership between Georgia’s peanut farmers, the commission board and staff, in funding research projects to assist with increasing yield, promoting peanuts and working on the farmers’ behalf in Washington, D.C.”

As required by Georgia state law, the state’s peanut farmers vote on the commission every three years. The ballots were mailed to peanut growers in March, and the Certified Public Accounting firm of Allen, Pritchett and Bassett counted the ballots on April 28.

Georgia’s peanut farmers invest $2 per ton each year to the commission to be used for research, education, promotion and communication.

Members of the 2015 Alabama Peanut Producers Association’s “Peanut Team” participated in the March of Dimes’ “March for Babies” walk in April. This year’s event was held at the Geri Moulton Children’s Park, located in front of USA Children’s and Women’s Hospital in Mobile.

This was the sixth year the APPA has sponsorsed the kids activities tent where children of all ages enjoyed playing games, making peanut arts and crafts and received packets of Alabama peanuts along with educational brochures on the health benefits of peanuts.

March for Babies is a yearly event in more than 1,100 communities nationwide. Since 1970, the event has raised over $2 billion for research that focuses on the prevention of premature births, birth defects and infant mortality.

The Georgia Peanut Commission (GPC) board of directors approved $357,570 in research project funding for the 2015-16 research budget year for 29 project proposals submitted from the University of Georgia and USDA Agricultural Research Service.

“Donald Chase, GPC research committee chairman, says, “Peanut growers are pleased to invest in the future by providing monetary support for research and education that has continued to demonstrate a return on our investment. Due to the continuing success enjoyed by Georgia peanut farmers over the past few years, we were able to increase research funding again for 2015.”

The GPC board approved additional funding this year to provide a tractor for the UGA Peanut Team. The tractor is compatible to 4-row equipment and is equipped with GPS guidance.

“We would like to thank the Georgia Peanut Commission and the peanut growers in Georgia for providing the needed funds for purchasing a John Deere 6125R tractor for use in research and Extension efforts to advance the production capabilities of Georgia producers,” says UGA peanut agronomist, Scott Monfort, on behalf of the UGA Peanut Team. “The purchase of this tractor will allow the peanut team to begin to evaluate new tillage, planting, pest management and harvest technologies in the future.”

The research programs primarily focus on peanut breeding for higher yield and improved quality; economics; conservation methods; irrigation and water management; pests, weed and disease management; and peanut allergy research. The GPC is also funding research focusing on the development and evaluation of new cultivars with an emphasis on disease resistant genetic markers and using long range internet connectivity and other newer technologies to improve management on the farm.

For a complete list of the research projects, visit www.gapeanuts.com.