The 2014 Farm Bill established the national loan rate for peanuts at $355 per ton, which is unchanged from the previous Farm Bill. CCC calculated the price support levels for each peanut type using the same method as last year. The CCC’s calculations include the national loan rate, the five-year average of quality factors and the three-year simple average weighted production.

All loans processed prior to that time will be corrected through Farm Service Agency county offices and designated marketing associations to ensure producers receive the correct loan amounts.

CCC applies premiums and discounts for quality factors into the calculation for an individual ton of peanuts. The actual loan level depends on the percentage of sound mature kernels and sound splits. SMKs are whole kernels that pass over the testing screen officially designated for each type of peanut. Sound splits are whole kernels split into two pieces.

Previously, only cash, check, money orders and wires were accepted. By using debit cards and ACH debit, transactions are securely processed from the customer’s financial institution through Pay.gov, the U.S. Treasury’s online payment hub.
While traditional collection methods like cash and paper checks will continue, offering the new alternatives will improve effectiveness and convenience to customers while being more cost effective.

In 2017, the average cost to manually process checks, a process that included navigating multiple systems, cost the USDA more than $4.6 million. The expanded payment options will reduce the time employees take processing payments by 75%.
This announcement marks the beginning of a multi-phased roll out of new payment options for USDA customers.

U.S. Secretary of Agriculture Sonny Perdue has announced that USDA will take several actions to assist farmers in response to trade damage from unjustified retaliation and trade disruption.

Standing alongside President Trump in the Roosevelt Room of the White House for the signing was Donald Chase, a peanut farmer from Oglethorpe, Georgia, who serves on the Georgia Peanut Commission. The president was also accompanied by two former Georgia leaders, Sonny Perdue, from Bonaire, and Zippy Duvall, American Farm Bureau president, from Greensboro.

The administration’s plan is a $16 billion aid program intended to help ease the impact of decreased agricultural purchases from China, one of the consequences of the trade war. The aid will include $14.5 billion in direct payments to farmers through the Market Facilitation Program.

Originally, peanut farmers were excluded but will now be eligible for the direct payments. There will be three payment installments starting in July. Additional payments will come in November and January as needed. Producers will receive a payment based on a single county rate multiplied by a farm’s total plantings to those crops in aggregate in 2019. Therefore, payments will be calculated after the final reporting planting date of July 15.

Georgia Peanut Commission Chairman Armond Morris says, “Peanut growers are pleased that we were included in the Market Facilitation Program. The peanut industry needs a strong export market, and we will continue to work with the administration to expand our reach.”

Another $1.4 billion will be allocated to the Food Purchase and Distribution Program to buy surplus commodities. Those goods will be distributed to schools, food banks and other groups. The remaining $100 million will go to developing new export markets for American producers through the Agricultural Trade Promotion Program.

Throughout the remainder of the harvesting season, the new equipment will be used to capture as much data as possible. The plan is to run side-by-side comparisons using the prototype and current grading equipment. Evaluations will include timed studies on each piece of equipment to report efficiency. Each of the grade factors will also be analyzed for accuracy and consistency.

Progress is also being made on an in-shell moisture meter, which has included securing patent licenses and protecting the rights to intellectual property.

U.S. Secretary of Agriculture Sonny Perdue announced in September that agricultural producers affected by natural disasters in 2018 and 2019, including Hurricane Dorian, can apply for assistance through the Wildfire and Hurricane Indemnity Program Plus. Sign up for this program started on Sept. 11.

“U.S. agriculture has been dealt a hefty blow by extreme weather over the past several years, and 2019 is no exception,” Perdue said. “The scope of this year’s prevented planting alone is devastating, and although these disaster program benefits will not make producers whole, we hope the assistance will ease some of the financial strain farmers, ranchers and their families are experiencing. President Trump has the backs of our farmers, and we are working to support America’s great patriot farmers.”

More than $3 billion is available through the disaster relief package. WHIP+ will be available in counties with a disaster designation or declaration. Producers in counties not receiving a declaration but provide supporting documentation to establish that the crops were directly affected by a qualifying disaster loss.

A list of counties that received qualifying disaster declarations and designations is available at farmers.gov/recover/whip-plus.

Helps For The Bahamas

Peanut Proud Inc. reports donations from the peanut industry have totaled more than $40,000 for aid to the Bahamas. Recently, pallets of Peanut Proud peanut butter rolled out of Albany, Georgia, in a Southern Ag Carriers semitrailer headed for West Palm Beach to be loaded on a Carnival Cruise Line ship for delivery.

A total of 24,480 jars were delivered to the National Emergency Management Agency for distribution.

Donate to Peanut Proud through its website at www.peanutproud.com.

Virginia/Carolina Region: Richard H. Rentz Jr., producer, Branchville, S.C. Darlene Cowart, Birdsong Peanuts, Suffolk, Va.
The 18-member board was authorized under the Farm Security and Rural Investment Act of 2002. One-third of the board members are appointed each year.

More information about the board and USDA’s partnership with the peanut industry is available on the USDA’s Agricultural Marketing Service Peanut Standards Board page.

A group of 14 Europeans who write for various publications in the United Kingdom, Germany and the Netherlands traveled to Georgia to participate in the 33rd Annual Georgia Peanut Tour. which was coordinated by the Georgia Peanut Commission and the University of Georgia. The tour was centered in Cordele, Georgia, and the surrounding area.

The visitors from abroad enjoyed breakfast with former President Jimmy Carter in Plains, learned more about peanut nutrition from the Peanut Institute’s Samara Sterling and peanut allergies from Sherry Coleman Collins of the National Peanut Board. Producer and NPB board member Casey Cox talked to the group about sustainability in the peanut industry.

The goal of the event is to encourage influencers to share the information with readers. The trip was coordinated by the American Peanut Council.

Hope for a commercially available peanut allergy therapy got a boost in September when a Food and Drug Administration advisory committee said it believed safety and efficacy data support the use of Palforzia. The National Peanut Board was an early funder of the oral immunotherapy studies led by Wesley Burks at both the University of Arkansas and Duke University.

Known until now as AR101, Palforzia has been shown to help some children and teens increase tolerance, reducing the likelihood of a serious reaction from accidental exposure to peanuts. It uses increasing doses of peanut flour to help the body deal with the ingestion of peanut protein without a serious systemic reaction.

While the committee’s vote sends a positive signal, FDA is likely to take a few months to make a final decision on approval.
If approved, the committee reviewing Palforzia called for ensuring caregivers or patients will always carry epinephrine while under therapy and the first and each increasing dose be given at a “certified facility” – helping treat any potential reactions.

Committee members also singled out the lack of long-term data available for Palforzia and said ongoing monitoring will be important.

Parents, children and advocates who presented their own stories to the committee said they understood the challenges and limitations that come with this therapy. Lisa Gable, CEO of Food Allergy Research and Education, said, “Many patients are willing to accept some risk of new treatments. That decision should lie with them.”

Exposure to peanut early is a confirmed recommendation.

The National Peanut Board, funded by farmers, has been a leader in helping to solve the peanut allergy issue 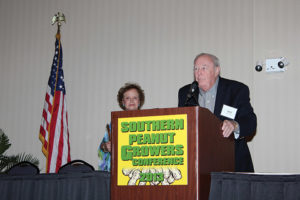 “Jack” Terry Chastain, former chairman of the American Peanut Sheller Association and an industry Hall of Fame inductee, passed away in October.

According to the American Peanut Council, Chastain entered the peanut shelling business in 1970 at Doster Warehouse in Rochelle, Georgia. Chastain and a partner purchased Doster in 1977. He became known as an innovator throughout his shelling career. Doster’s became one of only two companies in the world capable of producing bar-ready peanuts for candy manufacturers.

At Doster, Chastain worked with local farmers by providing seven-year interest-free financing for irrigation systems. He designed the first mezzanine-raised floor in the shelling plant. This was done to allow for electrical conduits under the deck, but it also provided better cleaning, an innovation in all shelling plants today.

Doster was one of the first to remove foreign material to a level that allowed direct shipment to a candy company without further cleaning and processing. When Doster Warehouses needed a new roof, Chastain had the idea to keep the old roof and add new purlins and tin. The double roof provided better temperature control and more air circulation. Again, this innovation is the industry norm today.

In 2005, Chastain introduced the industry to storage domes, a move that certainly changed the landscape of Rochelle. Doster constructed three domes, bringing their total in hull peanut storage capacity to 32,000 tons.

He served as president and chairman of the American Peanut Shellers Association twice: 1998 – 1999 and 2005 – 2006. Chastain served on the board of directors and as vice-chairman of the committee on peanut legislation. He helped to guide the APSA legislation position in the Farm Bill.

Chastain was married to Norma Doster for 53 years. They had two children: Todd (deceased) and his wife, Lorrie; Phillip and his wife, Lisa, and grandchildren Bailey, Doster and Jackson.