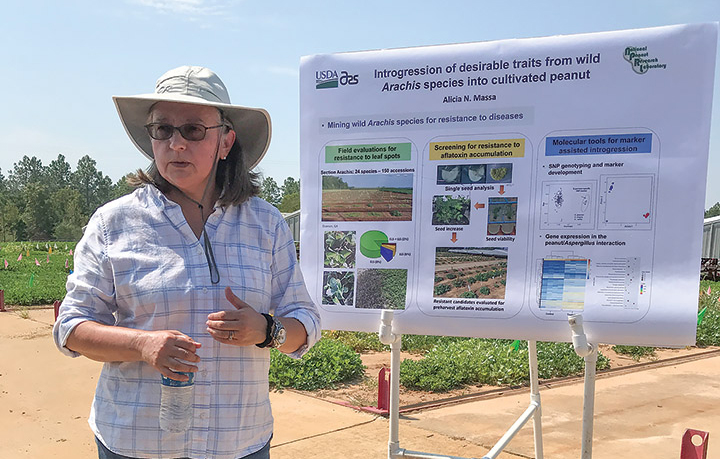 Well-deserved recognition is in order for the National Peanut Research Laboratory.

Today’s farmers continue to reap the benefits sown by a group of forward-thinking peanut leaders in the late 1950s. That’s when the idea for a laboratory dedicated to research on peanuts and peanut processing was born.

“We are the only U.S. Department of Agriculture-Agriculture Research Service lab that is solely dedicated to peanuts,” says Marshall Lamb, research leader and location coordinator. “This anniversary is a time to look back at accomplishments and ahead to what we can do next.”

It was in 1957 that the National Peanut Council established the Peanut Improvement Working Group, which became the impetus for establishing a peanut laboratory. It took most of the early 1960s to get the lab approved in Congress and move it from an idea to actual plans.

Lamb says the original purpose for researchers was better farming practices focusing on engineering and aflatoxin. Since that time, scientists have studied a variety of ways to improve peanut production from storage improvements and energy savings to better irrigation practices, including the development of Irrigator Pro.

From Seed To Consumer

As a stop on this year’s Georgia Peanut Tour, participants were able to see some of the research being conducted under the lab’s current four focus areas: cropping systems, engineering, molecular biology and genetics.

Chris Butts, NPRL engineer, talked about research on sampling using new equipment and methods to reduce labor and time, and therefore, cost. Testing is underway to verify the accuracy of the new method in determining peanut quality parameters including, but not limited to, foreign material, damage, oil chemistry and kernel size distribution in farmer stock and shelled peanut lots.

Working to make the use of shallow subsurface drip irrigation in field crops possible has been a focus for Ron Sorensen, NPRL research agronomist. He has successfully used drip tubing in the field for five years with a cotton-corn-corn-corn-peanut rotation. He continues to perfect the practice and reduce rodent damage, one of the problems with drip irrigation.

Much Technology In Play

Victor Sobolev, research chemist, and Alicia Noemi Massa, research geneticist, are studying peanut phytoalexins – chemical compounds that are part of the peanut’s own defense mechanism. Could the answer to aflatoxin be in increasing or “turning on” the phytoalexin compound within the peanut that would stop A. flavus fungi from growing?

Renee Arias, research plant pathologist and a recipient of the Presidential Early Career Scientist of the Year Award, is working on possible ways to prevent formation and accumulation of aflatoxin in plants and seeds by “silencing” genes in the aflatoxin biosynthesis pathway.

No matter the topic, Lamb says developing technology for the end user is the goal. “In 50 years, we have created a tremendous amount of technology used in the industry today.”

The NPRL will celebrate its anniversary in November almost 50 years to the day of its dedication. After all the days’ events have wound down, many of these researchers will probably go right back to work.