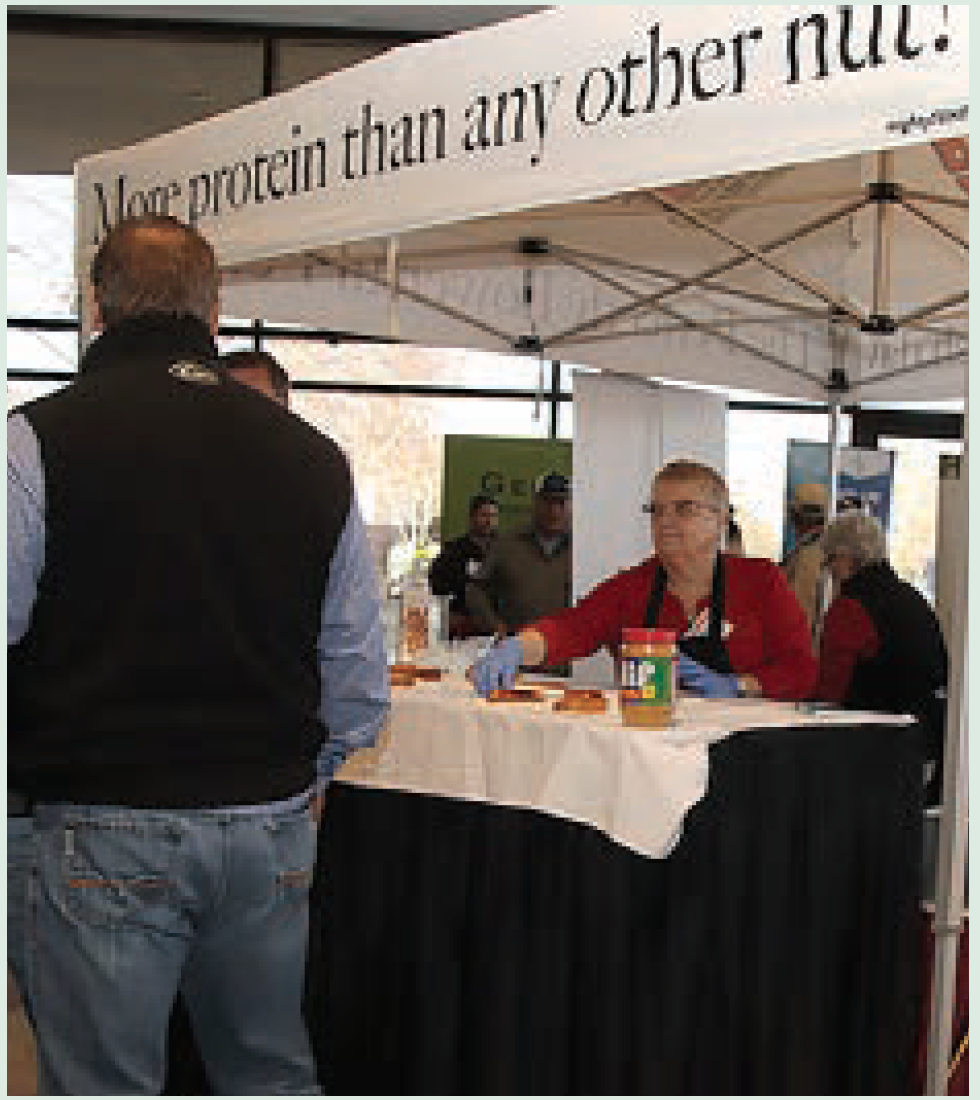 “We are very pleased the bill is moving forward. This is a good Farm Bill for all peanut regions and segments of the peanut industry. The bipartisan vote in support of the Farm Bill is indicative of committee leadership working together,” says Southern Peanut Farmer’s Federation Chairman Armond Morris, a Georgia peanut farmer and chairman of the Georgia Peanut Commission.

The Price Loss Coverage (PLC) program includes peanut provisions that are similar to the 2014 Farm Bill.
Majority Leader Mitch McConnell, R-Kentucky, mentioned in his remarks at the mark up that they will turn to the Farm Bill before the July 4 recess in regards to putting the bill on the Senate floor. The Senate will be in recess beginning on June 30.

House Farm Bill Fails
After nearly three days of debate, The House of Representatives failed to pass the Farm Bill (H.R. 2) by a vote of 213 to 198. The Farm Bill became a casualty over a dispute concerning immigration, and it’s uncertain when the House will consider the legislation again.

One group said it was an embarrassing defeat and was weighted down by the controversial food stamp reforms and finally the feud over immigration policy. Republicans from California, Texas and Florida who support legalizing the “dreamers” have joined Democrats in signing a discharge petition that would force action on the issue, but none has been forthcoming.

The Freedom Caucus members are determined to head off the petition process and have seized on the Farm Bill to demand that, in return for their votes, the House act on an immigration bill sponsored by House Judiciary Chairman Bob Goodlatte, R-Virginia.

GOP leaders promised a vote on the Goodlatte bill by June 25, but that wasn’t good enough to get the Freedom Caucus members to vote for the Farm Bill. Some will recall that five years ago, the Farm Bill failed on the House floor after an amendment to tighten SNAP work requirements cost critical Democratic support. The Farm Bill was revived in the Senate.[divider]

Next House Steps
The House Ag Committee next step could be to reconvene and seek a different compromise on the work requirement to get food stamps. No word on when the immigration legislation will happen.

Following the vote, House Ag Committee Chairman K. Michael Conaway, R-Texas, issued the following statement:
“We experienced a setback today after a streak of victories all week. We may be down, but we are not out. We will deliver a strong, new Farm Bill on time as the President of the United States has called on us to do. Our nation’s farmers and ranchers and rural America deserve nothing less.”

House Ag Committee Ranking Member Collin C. Peterson, D-Minnesota, said, “It’s unfortunate the Republicans chose to take this path, and it’s clear from their inability to get the necessary votes from within their own caucus that there are internal fractures they have to contend with. But this is a good opportunity for us to return to the table and fix this bill before we move forward.

“Let’s come together and figure out a bill that works for everyone. We don’t have to let this process be held hostage by the demands of the extremes of our parties. We can and should take the time to get the Farm Bill right.”[divider]

Therefore, both programs will continue to receive $200 million and $34.5 million respectively for FY 19.

While the peanut industry continues to seek increased funding for MAP and FMD in the new Farm Bill, it’s important to urge members of the House and Senate Appropriations Committees to maintain no less than what is currently authorized in the Farm Bill. The bill will go to the full Appropriations Committee. The peanut industry receives about $3.1 million annually (before industry matching funds) for export promotion as managed by the American Peanut Council.

Rep. Dan Newhouse (R-WA) has introduced an amendment to H.R. 2 that would authorize an additional $10 million annually to be appropriated for MAP through discretionary funds in the new Farm Bill.[divider]

E-Nuts Integration For 2018
Buying points using the Georgia Federal State Inspection Service E-Nuts program and The Seam will experience an increase in efficiency by eliminating the need to re-enter information captured through E-Nuts.

Information entered into E-Nuts will flow naturally to The Seam’s Farmer Stock Platform saving the need for re-entering information.

“Collaborating more closely with GAFSIS on integrations such as this projects our mutual goal of continuous improvement and embracing technology to drive greater efficiencies for the peanut industry,” says Mark Pryor, The Seam chief executive officer.[divider]

Making Peanut Impressions
The National Peanut Board and The Peanut Institute partnered at their recent 2018 Culinary Retreat in Napa, Calif. The event brings together domestic and international journalists, researchers and chefs to share the latest about peanut nutrition, health and culinary versatility. At this year’s event, attendees heard from the experts about the protective health benefits of peanuts, how they can fit into healthy meals and snacking and their role in sustainability and conservation.

NPB’s CEO and President Bob Parker shared an update of the work NPB is doing to support USA-grown peanuts as the preferred choice among consumers. Sherry Coleman Collins, NPB’s registered dietitian nutritionist, shared the latest research on the early introduction of peanut foods to infants to prevent peanut allergies and an overview of research related to diagnosing and managing peanut allergies.

Attendees were treated to inspirational chef demonstrations and a hands-on cooking session using a variety of peanut foods to create delicious and nutritious peanut-themed dishes at the Culinary Institute of America. Undoubtedly, attendees left the event more inspired about recommending, writing about and eating peanut foods. For more information about the event, be sure to visit The Peanut Institute’s YouTube channel.[divider]

This large international event is dedicated to the nut and dried fruit industries with key industry decision makers from around the world attending. The International Nut Council has reported that this year’s Congress was attended by more than 1,300 food professionals from industry and academia from more than 60 countries.

In addition to providing a forum for the industry, the congress also features international companies in an exhibition area that displays the latest equipment, innovations and products in the nut and dried fruit sectors. The American Peanut Council met some new contacts in the nut processing, sorting and related businesses. The Congress has traditionally been more focused on tree nuts but has widened to cover peanuts and dried fruits in recent years. Ümit Ergin of Olam International fielded questions from the moderator related to peanuts.[divider]

UF/IFAS Pre-Harvest Demo
The Suwannee County UF/IFAS Extension is hosting a multi-county Pre-Harvest Field Demonstration and Peanut Trade Show on Aug. 21, 2018. It will be held at the North Florida Research and Education Center-Suwannee Valley located at 8202 County Road 417 in Live Oak, Florida.

The event starts at 4 p.m., with an optional core pesticide training with CEU’s available beginning at 3 p.m.

This clinic will provide a general review of equipment adjustment and peanut harvest maturity to help producers minimize yield loss during the harvest season. Representatives from KMC, Amadas and Colombo companies will be on hand to complete demonstrations and answer questions. Additionally, there will be a vendor trade show.

All farm owners, equipment operators and farm managers are invited to attend. Dinner is sponsored by Florida Peanut Federation. Attendees are asked to register by Aug. 7. For more information or to register for the free event, contact the Suwannee County Extension at 386-362-2771 or email De Broughton at deonne@ufl.edu.[divider] The National Peanut Buying Points Association has teamed with The Peanut Institute and the Georgia Peanut Commission to prepare and serve more than 15,000 peanut butter and jelly sandwiches during various peanut festivals this year.

“This is an unbelievable project. The response has been excellent,” says Tyron Spearman, who continues to be amazed at the look on people’s faces when they first try a grilled PB&J. Although labor intensive, Spearman says it is worth it because of the satisfied customers and it opens the opportunity to spread the message about peanut nutrition and the healthy aspects of peanut butter.