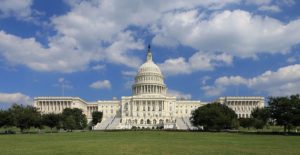 At the National Peanut Buying Points Association Annual Convention, U.S. House of Representatives Agriculture Committee Chairman, Collin Peterson (D-Mn) said, “It was a miracle with all the problems we had to face that we got a Farm Bill!”
Peterson said that it was good news the way it played out, but it was hard fought and took bipartisan teamwork.

Chairman Peterson said that only 30 to 40 representatives are from rural districts in Congress. The real sticking point on this Farm Bill is the Supplemental Nutritional Aid Program, but as Peterson said, “Incorporating it is the only way to keep this thing together.”

Peterson also expressed his concern about farmers. “The trade issues will not back off. Right now, the steel guys are running the trade show. We get out negotiated. We need trade and we will continue to fight to increase our commodity exports. We have maintained the Market Assistance Program to promote more exports.”

He also said the price of commodities is not covering the cost of production. “This year, rent costs even went up. We may have to consider increasing the CRP program to take land out of production.”

On disaster relief, Peterson said, “We tried to get disaster funds for the Southeast through appropriations, but a dispute over a few hundred million dollars for Puerto Rico disaster assistance cost the Southeast about $3.0 billion.”

Bob Redding of the Redding Firm, who represents the producers of the Southern Peanut Farmers Federation, discussed top peanut policy issues at the NPBPA Winter Conference. The top priorities for peanut farmers included the 2018 Farm Bill, status of disaster legislation, a trade update and ag labor outlook as part of immigration reform legislation.

The 2018 Farm Bill kept critical peanut provisions in place including the $535 per-ton reference price, storage and handling provisions and the separate peanut payment limit. The administration may have some limited agreement with China by early March. House and Senate bills have been introduced on ag labor.

Redding said, “What is important to peanut growers is Senator Perdue’s efforts to include 2018 disaster assistance for those peanuts harmed by excessive rains.”

Farmers and agriculture officials are frustrated about the delays in disaster aid on the federal level. In South and Middle Georgia, Northern Florida and Alabama, farmers and rural communities are still awaiting federal assistance to aid in damages to property, crops, public infrastructure and utilities caused by Hurricane Michael.

Efforts are underway to unite the two bills and vote before the end of March. Senator Isakson said the chairman of the Senate assured him that if the bill was not approved by the end of March, ‘he would personally get it on the floor for a vote.”

Georgia Governor Brian Kemp and state Agriculture Commissioner Gary Black are ready to move with the approval of the new budget. Kemp said he would sign proposed state legislation adding $18 million to a loan program for farmers hit hard by Hurricane Michael and another $2 million for damaged rural hospitals.

The approval is added to the $470 million in aid the General Assembly previously has approved in a called session. Assistance for program crops assistance would be managed by FSA, and non-program crops such as pecans, vegetables and timber would be handled by Georgia Department of Agriculture through block grants.

Conveyance size is increasing with tons per certificate or load now at 12.21 tons (more semis) compared to only 9.11 tons in 2014. No-sales of loads declined this year. The reasons for no sales, which require a new grade, were high moisture – 26.02 percent, grade – 22.63 percent and foreign material or LSKs – 51.16 percent.

Labor is a major issue since more than 1,000 graders or assistants are needed for the two-month harvest. The use of the Department of Labor job fairs has been successful, and temporary service companies have also been used. Moye said another area that has been successful and will expand has been the part-time employment of FFA students.

Recommendations for 66 projects totaling $1,801,224 were reviewed and approved.

“Today’s seed varieties that produce higher yields, withstand diseases, nematodes and other obstacles are the result of years of high-quality production research,” said Dan Ward, National Peanut Board chairman and North Carolina member. “Our research dollars continue to give farmers the critical information that makes them more productive and ensures peanuts remain competitive, now and into the future.”

In its 19-year history, the community of peanut farmers through NPB has invested $34.5 million in production research. This total includes NPB’s leverage of $871,500 — of NPB funds and other industry partners’ funds —with NIFA-matching funds to yield over $2.5 million for NIFA-managed peanut production research.

Funding production research to increase efficiencies for America’s peanut farmers and their families is a core part of the Board’s mission.

NPB staff gave an update of the 2020 diversity plan. Leigh Allen, executive director of the National Black Growers Council (NBGC), presented to the board, focusing on strategies to involve minority peanut farmers. The mission of the NBGC is to improve the efficiency, productivity and sustainability of black row-crop farmers.

The National Peanut Buying Points Association annually honors a buying point as the Buying Point of the Year. This award honors growth and efficiency, staff and development, education, community involvement and hard work.

Joe Parker, NPBPA president said, “With over 300 buying points across America, it is difficult to select one as the Peanut Buying Point of the Year. Once nominated, the board votes to determine the winner.”

This year, the Buying Point of the Year is Douglas Peanut and Grain. Douglas Peanut Company is owned by Ralph Evans and managed by Peter Brown. Located in Douglas, the buying point started in 1984 with Golden Peanut Company. They joined the Premium Peanut, LLC in 2016.

Upon learning of the honor, Brown said, “I want to pay tribute to my staff on the yard and in the office, we could not have made this possible without them.”

Brown is a board member of the National Peanut Buying Points Association and active on the PAC Committee selling tickets each year. He is active in the community with the Boys and Girls Club, his church and in his girls’ participation in softball.

By category, the breakdown shows per capita consumption of 4.02 pounds per person for peanut butter, 1.60 pounds for snacks, 1.16 pounds for candy, .43 pounds for in-shells and .29 pounds for other products. Reports indicate that peanuts are getting traction as the snack category expands.

Other trends impacting peanut butter are diets prescribing no bread, a strong economy that causes consumers to eat out more often. The perception of the healthfulness has pushed consumers to almond snacks, which are supported by major advertising dollars.

Consumer research shows that consumers consider price, favorite flavor, health and natural ingredients when selecting a snack. The global market for snack food is expected to grow 5.8 percent annually through 2021.

Getting the message to consumers that a small amount of peanut butter at age four to six months will help to reduce the likelihood of peanut allergy continues to be a priority of the National Peanut Board.

The ground-breaking LEAP study showed that it is possible to reduce the development of peanut allergies in high-risk infants by 86 percent by introducing peanut foods at an early age.

Bob Parker, NPB chairman, says that of the 4 million live births each year, with an allergy rate of 2 to 2.5 percent, about 90,000 infants are likely to develop a peanut allergy.

“We have the potential to reduce peanut allergy prevalence from 90,000 to 13,000. Recommend the guidelines to family, friends, pediatricians, organization members, churches, hospitals and schools.

For FACT cards, call 678-424-5750. A video to share on social media is available at www.preventpeanutallergies.org. PG