Because of losses suffered during the last growing season and new tariffs, Georgia farmers are facing a sense of uncertainty surrounding the upcoming production season, says University of Georgia agricultural economist Adam Rabinowitz.

Just four months removed from Hurricane Michael — the devastating October storm that contributed to more than $2 billion in agricultural-related damage — farmers are unsure of how to proceed. Crop insurance does not fully cover those losses. Farmers are also unsettled about the current tariffs and how they will impact commodity prices that are already extremely low.

“We had the market facilitation program last year to cover some of those losses that were a result of trade and Ag Secretary Sonny Perdue has said he doesn’t want to do that again this year,” says Rabinowitz. “If those tariffs do not get removed, then there’s questions on what’s going to happen in terms of prices and whether there will be any other type of government support.”

Rabinowitz says peanut farmers need to continue to reduce peanut acreage if prices are going to improve. Georgia produced 628,000 acres last year, down from 714,168 acres in 2017. Another 5 to 10 percent reduction in peanut acres would start to move prices favorably for farmers, he says.

Corn acreage could increase this year depending on the future of soybean exports to China. Prices remain at $4 per bushel, though Rabinowitz believes an increase to $4.50 is likely.

Positive And Negative In Input Costs

“There’s certainly hope for higher prices, but it doesn’t look like there will be on the row crop side. There may be a little bit of an increase on corn, but the fact that we’re going to see increased acreage in the United States just because prices have gone up a little means that, overall, it’s not going to be that impactful,” Rabinowitz says.

More discouraging news for farmers is that, while prices remain low, input costs are rising.

“We’re seeing some increases on fertilizer costs, machinery, labor, interest rates. They’ve all gone up a little bit,” Rabinowitz says. “Diesel prices have come down, so that certainly helps.”

Land values remain stable, with a small decrease on the cost of irrigated land rent. This is good news for farmers who need equity when they apply for this year’s loans.

Information provided by the University of Georgia College of Agricultural and Environmental Sciences based in Tifton.[divider] 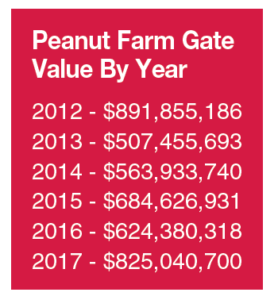 Among University of Georgia agricultural economist Kent Wolfe’s list of job responsibilities is determining the value of Georgia’s agriculture commodities. Wolfe is director of the UGA Center for Agribusiness and Development.

The U.S. Department of Agriculture’s National Agricultural Statistics Service uses the market year price for the whole year to determine farm gate values, but Wolfe, with the help of Cooperative Extension agents across the state, uses crop prices at the time of harvest.

With the information, EDDMapS IPM is better able to target pest and disease information, says Joe LaForest, associate director of the UGA Center for Invasive Species and Ecosystem Health system, also known as the Bugwood network, and leader of the Integrated Pest Management (IPM) and Forest Health programs.

Farm gate data is generally released a year after the crop year. The 2018 crop year will be completed later this year. For 2017, the total farm gate value for Georgia agricultural commodities is $13.7 billion. The top five commodities in order of value were broilers, cotton, eggs, peanuts and timber.