According to the U.S. Department of Agriculture’s National Agricultural Statistics Service, peanuts averaged about 21 cents per pound or $414 per ton last season, 1% higher than 2019. The value of the crop at the farm level is $1.27 billion, a 12.7% increase from 2019. Harvested peanut acres were up 16.3%.

The highest average price was paid in New Mexico at $656 per ton, followed by Texas at $526 per ton. The lowest price average was paid in Arkansas at $388 per ton. Mississippi and Georgia were next lowest at about $400 per ton.

Approximately 51% of peanut revenue was produced in Georgia. Ranking second in revenue was Alabama at 10%, followed by Florida with 9%.

Because of recent winter storms and clarifications needed for the program rules, USDA is extending the deadline to April 9 for agricultural producers to apply for the Quality Loss Adjustment Program.

The U.S. Peanut Federation urged USDA to extend the deadline because of the need for clarity in the rules.

Eligible crops include those for which federal crop insurance or Noninsured Crop Disaster Assistance Program coverage is available, especially peanuts and cotton that experienced quality losses these two years.

FSA will issue payments once the application period ends. If the total amount of calculated QLA payments exceeds available program funding, payments will be prorated.

Members of ATAC provide advice and information regarding trade issues that affect both domestic and foreign production and trade concerning tobacco, cotton and peanuts. In addition, ATAC members furnish advisory opinions and reports regarding trade policy as requested by the secretary of agriculture and the U.S. Trade Representative or their designees.

Planters has been producing snack nuts for 115 years, but the future will be under the direction of Hormel, a company known for Spam and other meat products.

Hormel acquired Planters from Kraft Heinz for $3.35 billion. The deal, the largest in Hormel’s history, was funded with a mix of cash on hand and the issuance of new debt. It’s expected to close in the second quarter.

The marriage has long been rumored for several reasons. First, Hormel has a strong position in the nut butter market with well-known brands Skippy and Justin’s. Adding Planters brings Hormel more into the nut snacks category. The transaction also brings Hormel into the snacking business overall as Planters includes the Cheez Balls and Corn Nuts brands.

According to Hormel, Planters’ net sales in 2020 were roughly $1 billion, and owning the brand will enhance overall profit margins and cash flow. 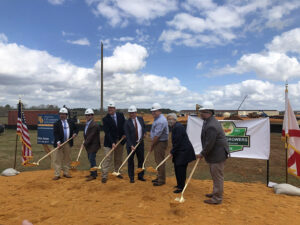 Farmers in southwest Alabama and some from Georgia joined together to form Coastal Growers. The cooperative shelling and storage facility will sit on more than 60 acres, cost $87 million and is expected to bring more than 150 jobs to the area.

Smith and Parker, two of the driving forces behind the project, say the Atmore location is the perfect site for the company.

“The peanuts we have in this area are among the highest quality available, yet we really have no infrastructure for shelling,” says Parker, who is owner and general manager of Summerdale Peanut in Baldwin County.

Glenn Spivey, president of Dothan’s Hollis & Spann Inc., will lead construction efforts for the project. Spivey says the new facility, encompassing more than 400,000 square feet, will take about a year to build. 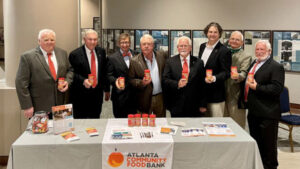 To kick off “March is National Peanut Month,” the Georgia Peanut Commission hosted the Georgia PB&J Day at the Capitol and donated 10,080 jars of peanut butter to the Atlanta Community Food Bank.

Ben Burgess, corporate relations manager says, “One jar can make several meals for a family or individual in need. This donation will help the nearly 20% of Georgia residents and the one-in-four children who are food insecure in the state.”