Trading in the U.S. market is relatively quiet with movement only on small quantities as buyers take a wait-and-see attitude toward the new crop. A planting intentions report was due at the end of March.

Farmers holding out on contracting were looking at both cotton and corn to compete for those peanut acres in 2021. This bit of leverage may help in contract negotiations for new crop farmer stock, which is now at $500 per ton in some areas.

Last year, contracting was at $425, so we are at least $75 per ton higher, which equates to at least 6 cents per pound higher on shelled grades for 2021 crop. Planting decisions will soon be made, and then the market will watch the weather.

The United States produced a 3-million-ton crop last year with great weather. If acres planted for the 2021 crop are similar and we have dry weather and a lack of rain, the market will quickly rise. Manufacturers are trying to estimate demand in the COVID-19 recovery.

For the most part, industry marketers think that it is imperative planted acres for the 2021 align closely with those planted in 2020.

Farmers will need to order peanut seed and be ready for soil temperatures to warm up to 68 degrees Fahrenheit for three consecutive days, as recommended by University of Georgia peanut specialists. Growers are also being advised not to apply in-furrow fertilizer since tests have shown that this practice will reduce germination.

Some of the newer varieties are short on certified seed, but it is encouraging that producers are wanting to give them a try. Shellers are offering seed financing to allow for payment at harvest.

In the Southeast, contracts are mostly $475 per ton for runner-type peanuts. Each buying point has an allocation to be distributed to customers. Premiums include an additional $25 per ton for seed production and $25 to $50 per ton for high-oleic peanuts. Some contracts limit totals to 50% of last year’s production. Some shellers are offering $500 per ton to ensure that peanuts are grown under irrigation. 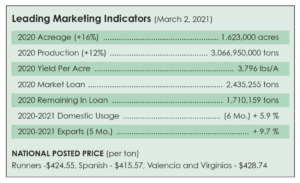 Also offered are runner pools with $435 per ton now and dividends to be determined at the end of the season after sales.

Another offer is a minimum-maximum pool that allows growers to participate in the shelled market movement.

In the Virginia-Carolina region and the Southwest, offers include $510-$520 per ton on Virginia type with limits. Some areas have a $25 per-ton premium for irrigated crop. Runners are $475 per ton plus $25 for high-oleic varieties, if available. Also being offered is $25 more per ton as a seed producer.

Peanut use slowed in January with total edible raw peanut usage down almost 3%. However, earlier gains in the year kept the annual usage up nearly 6%. Peanut butter still looks great, up about 4%. However, some folks predict that when the pandemic is over, consumption will likely drop as people will not be staying home.

The new 2020-2025 Dietary Guide- lines for Americans are favorable to peanuts and peanut butter and included the recommendation for early introduction of peanut foods for infants and children up to 24 months. If followed, this will help with the peanut allergy issue in many cases.

However, according to the National Peanut Board, some pediatricians are still not following the science and recommending these guidelines to new mothers. A special pediatrician education effort was implemented to increase awareness of the new guidelines.

In addition to the non-tariff barriers that the European Union has imposed on U.S. peanut exports to Europe, the EU and United Kingdom are now requiring a 25% tariff on peanut and peanut butter imports. The U.S. Peanut Federation has asked U.S. Trade Representative and the U.S. Department of Agriculture to assist in resolving these trade issues.

The EU imported nearly $180 million of U.S. peanuts and peanut products last year and $168 million in 2019. Nearly all of these exports were in-shell and shelled peanuts.

Canada and Mexico led buying for raw-shelled peanuts and peanut butter. Exports of peanut butter are down 11.1% for first four months but holding steady for now. Peanut exports are up 3.7% for the same time. China is still buying lower-grade peanuts for peanut oil.

The National Peanut Board’s Bob Parker said recently, “Americans are turning to peanuts to meet their nutritional, financial and, yes, even emotional needs. For our 7,000 peanut-farming families, that evokes pride but also a sense of responsibility and a commitment to live up to the trust consumers place in us.”