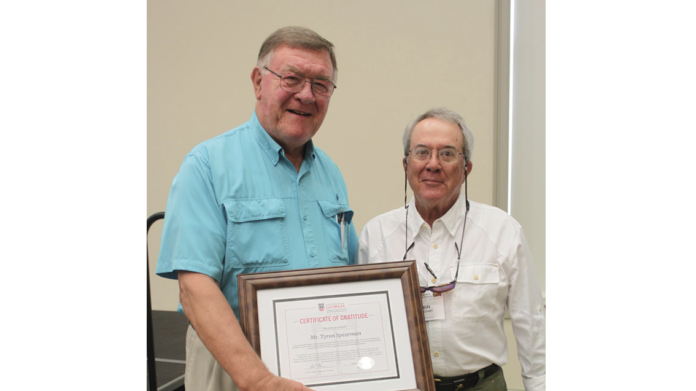 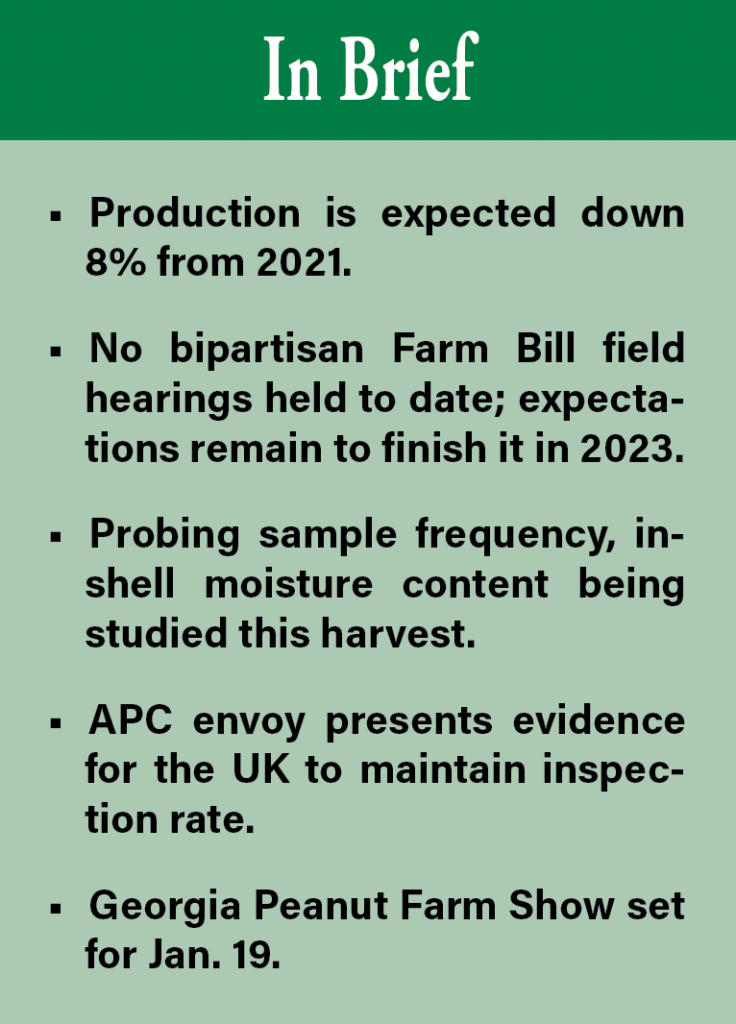 Peanut production is forecast at 5.85 million pounds or 2.9 million tons in 2022, down 6% from the previous estimate and down 8% from 2021. USDA made this prediction in September.

Based on conditions as of Sept.1, the average yield for the United States is forecast at 4,145 pounds per acre, up 16 pounds from the previous forecast and up 10 pounds per acre from 2021. Record-high yields are forecast for Florida, North Carolina, South Carolina and Virginia. On Sept. 4, 70% of the U.S. peanut acreage was rated in good to excellent condition, compared to 74% the same time last year.

“A Certificate of Gratitude is presented for your positive impact on the peanut industry in the State of Georgia. Your career serves as an inspirational example to current students about the value that comes from hard work, passion and a strong educational foundation from the College of Agriculture and Environmental Sciences.

“In your honor, The National Peanut Buying Points Association, along with companies and individuals who have been touched by your work in the peanut industry, has established the Tyron Spearman CAES Scholarship Fund. This endowed scholarship will provide support to future leaders of agricultural and environmental sciences as they complete their education in UGA’s Agricultural and Environmental Sciences.”

Recognizing A Lifetime Of Work

Singletary reported that already $50,000 had been pledged to the fund and the National Peanut Buying Point Association committed $5,000 annually in support of a freshman agricultural scholarship at Abraham Baldwin Agricultural College and a junior scholarship at the University of Georgia College of Agriculture and Environmental Sciences. Guidelines will be developed by the Scholarship Committee and Spearman.

Spearman was almost speechless as he responded to the astonishing announcement.

“It was an absolute surprise, and I am appreciative to the leaders of the peanut industry who made this recognition possible. This is a great industry, and it has been my honor to serve the peanut family and consumers, who enjoy our nutritious product.”

Spearman is executive director of the National Peanut Buying Points Association. He is probably best known as editor of the Peanut Farm Market News and marketing editor of The Peanut Grower Magazine, which is mailed to more than 8,000 peanut farmers. Spearman was inducted in the Peanut Hall of Fame in 2013, which is the highest honor presented in the American peanut industry.

Spearman is president of the Spearman Marketing and Advertising Company which coordinates marketing budgets and programs for agricultural companies, associations, museums and festivals and events in the Southeast. You can hear his voice daily on the Southeast Ag Net Farm News with updates on the peanut market and what’s happening in the world of peanuts. He is also the coordinator for the Tifton-Tift County Tourism Association.

Singletary said, “Tyron has certainly done a lot and contributed a lot to the U.S. peanut industry, but I think his biggest accomplishment is his never-ending optimism and love of our industry. He never stops promoting peanuts wherever he goes, and what would this industry do without his emcee skills, booming voice and infectious optimism about peanuts and the potential of our industry?”

U.S. Congressman Glenn “GT” Thompson, R-Pa. recently told a farm group that he’s ready to get back to work to accomplish an on-time Farm Bill in 2023. He also believes the Farm Bill is the one piece of legislation most likely to move in 2023, which also brings the opportunity to provide greater oversight of USDA. The current Farm Bill expires Sept. 30, 2023.

The No. 1 thing Thompson says he’s hearing from farmers is the frustration with high input costs, including fuel and fertilizer. He understands that farming is a business, and despite higher commodity prices, farmers are still searching for ways to remain profitable.

Thompson says the House Agriculture Committee is two and a half years behind on legislative oversight of the last Farm Bill. In 2018, a total of 130 field hearings had been held. To date, not one bipartisan field hearing has been held, although there have been seven field hearings hosted by Democrats. If the House changes to Republican control after the 2022 election, Thompson says there will be a change in intensity of getting out into the states to hear firsthand from farmers and agricultural stakeholders what changes should be made.

The frequency of using semi-trailers for drying has dramatically increased since their introduction in the Southwest production area. According to buying point owners/operators, most say that more than 75% of their tonnage is dried on semi-drying trailers. Current sampling methods call for probing a load of farmer-stock peanuts greater than 10 tons 15 times using approved patterns. One of bottlenecks in the grading process is getting a representative sample from the conveyance.

A research study on this issue is being conducted by researchers at the USDA National Peanut Lab in Dawson, Georgia. Agricultural engineer, Chris Butts, along with Quentin Read, Joseph McIntyre and research director Marshall Lamb will work with the USDA Agriculture Marketing Service and the Federal-State Inspection Service.

The thought is that the increased use of high-capacity dump carts during harvest means that peanuts are more thoroughly mixed when dumped into the semi-drying trailers in the field, reducing the variability. Therefore, the number of probes required to obtain a representative sample could be reduced from 15. The study will be conducted using flat bottom trailers greater than 10 tons.

Over the past several years, Clint Faircloth, project manager with Georgia Federal-State Inspection Service, has led an effort to develop a device that measures the moisture of peanuts in the shell. It has proven to be a challenge to find the right company to finalize the research and manufacture a device that is reliable and accurate. However, it was accomplished and two devices are being tested during the 2022 peanut season.

The first uses microwave technology patented and licensed by USDA Agriculture Research Service to measure in-shell moisture content. The technology was patented some years ago, but the road to commercialization has been bumpy. The manufacturer will continue making modifications during and following the harvest based on data and user feedback.

The second meter is commercially available and has been used for several commodities including almonds, pistachios, pecans and walnuts. It uses an approximate 40-gram sample, and work has been under way to calibrate it for use on peanuts. Again, data is being collected during the 2022 harvest to determine its accuracy.

Last April, the United Kingdom’s Food Safety Agency proposed raising the inspection level for aflatoxin in U.S. peanuts and peanut products from 10% to 20%, looking to follow what the European Union did on Jan. 1, 2022. The American Peanut Council, with support from the UK Nut and Dried Fruit Trade Association and the USDA, submitted detailed information in response arguing that data for the UK market was insufficient to support an increased testing rate.

APC’s direct engagement with the FSA, including a trip by an APC delegation to London Gateway port in mid-July, positively influenced the FSA’s decision not to increase the inspection rates for U.S. peanuts at this time. This is still a draft regulation, but it is expected to be finalized as is.

In the same proposal in April, the UK FSA proposed increasing aflatoxin inspections of peanuts from India to 50%, and to maintain the current aflatoxin inspection rates of 10% for Chinese and Brazilian peanuts, while moving both from Annex 2 to Annex 1. The UK FSA has proposed imposing a rate of inspection for pesticide residues for imports of Brazilian peanuts at 20%, which is also in line with EU testing rates.

Annex 2 is for countries/products placed under special conditions governing entry in the EU while Annex 1 is for temporary increase of official controls at Border Controls Posts. Initially, Annex 1 is used when products are seen as emerging risks, and they move up to Annex 2 when they are seen as permanent risks to be monitored closely. Products are moved from Annex 2 to Annex 1 when it has been shown that the risks are now much lower for that product.

Peanut Proud, the humanitarian arm of the peanut industry, recently ordered two truckloads of peanut butter for delivery to Southwest Florida and areas hit by Hurricane Ian. The peanut butter will be distributed by the Harry Chapin Food Bank. Two additional truckloads will be delivered in early November.

Contributions to the victims of Hurricane Ian are welcomed. The peanut butter is processed by Tara Foods in Albany, Georgia, and is made possible by donations from all segments of the peanut industry, plus individuals and organizations.

Donations can be made to Peanut Proud at P.O. Box 446, Blakely, GA 39823, or using their website at www.peanutproud.com.

Victor Galindo, CEO of Galdisa, a food company based in Mexico, was the featured speaker at the peanut buying points pre-harvest meeting, and he presented updated facts about Mexico and the peanut market. The population of Mexico is now more than 130 million, and it’s the 11th largest economy by gross domestic product.

Galdisa is the largest importer of peanuts in Mexico. The family-owned business has 60 years’ experience in the peanut industry with more than 400 employees. The company has five facilities in Mexico and the U.S. with three business divisions including distribution, snacks and ingredients.

Victor said that the United States had some non-price advantages that helped imports to Mexico. Being a member of US-Mexico-Canada agreement is a positive. Also, transit times are about two weeks over the road with no ships, plus Mexico is easy to travel to and the U.S. industry is providing some marketing support in cooperation with the American Peanut Council.

The 46th annual Georgia Peanut Farm Show and Conference is scheduled for Jan. 19, 2023, from 8 a.m. to 2:30 p.m. at the University of Georgia Tifton Campus Conference Center in Tifton, Georgia. The one-day show is free and open to all farmers and industry representatives.

Attendees will have the opportunity to visit with nearly 100 agribusinesses and organizations in the peanut and agricultural industry. Farmers can earn private and commercial pesticide applicator certification, as well as learn about cutting-edge research and developments during the University of Georgia Peanut Production Seminar and industry-wide sponsored Peanut Seed Seminar.

Farm Show chairman Rodney Dawson says, “I encourage farmers to attend this one-day show in Tifton. The knowledge they will gain from industry representatives and seminars is an investment in the future of their farm.”

The Georgia Peanut Commission, in cooperation with OneBlood, will host a blood drive from 9:30 a.m. to 2:30 p.m. At the close of the program, there will be nearly $10,000 in door prizes presented to farmers, as well as a grand door prize.

For more information, go to www.gapeanuts.com.