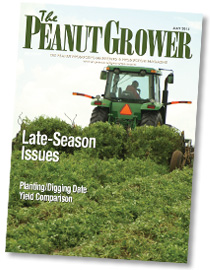 JOHN P. BEASLEY, JR.
University of Georgia
Extension Peanut Agronomist
The Southeast peanut crop was planted later than we wanted because of cold and wet conditions early on. As a result, we have seen and will see several production practices altered the remainder of the season.

First, thrips pressure was excessively high on fields planted in middle-to-late May. This is unusual because in a “normal” year, we see April-planted fields hit the hardest by thrips and later-planted fields escape the severest damage. The impact of the thrips injury on the lateplanted fields could very well result in even later maturity. Only time will tell.

Monitor fields for “white mold” or Southern stem rot closely well into August and September. Our University of Georgia plant pathologists have strongly encouraged early season control of white mold the past few years, but this could be a year in which it is more problematic later in the year, depending on weather conditions.

JASON WOODWARD
Texas Agri-Life Extension
Plant Pathologist
Most peanut fields are up to a good stand and growing well; however, there are still remnants of delayed establishment. While marginal soil moisture was most likely the culprit, several other factors, such as seed vigor, extreme weather conditions, planting depth and density, soil temperature and even herbicide carry-over, may have contributed to this problem.

Vigor is the component of seed quality responsible for rapid, uniform emergence under a range of conditions. In general, peanut has good seedling vigor; however, differences can be observed among varieties. Low-vigor seed will exhibit a delay in stand establishment.

Harsh conditions, such as temperature fluctuations and high winds resulting in blowing sand, slowed growth in some cases. Furthermore, the dry conditions experienced over the past few months may have led to an increase in herbicide residues as moisture to dissipate such products or promote microbial degradation was lacking. Regardless of the cause, close attention should be paid to the water demand of the crop at this time. Irrigation should be applied to foster humidity levels within the canopy needed for pollination, to moisten the soil for pegs to penetrate and to replenish what is needed to cool the plant and maintain growth and development. With a little relief in the form of rainfall and improved growing conditions, plants can produce a large number of blooms in a short period, thus allowing for high yields.

DAVID JORDAN
North Carolina State University
Extension Agronomist
In the upper V-C region, the first fungicide application generally goes out in early to mid- July and focuses on preventing epidemics from beginning. Some growers use the advisory system while others spray every two weeks on a routine schedule. Minimizing disease not only protects yield but also increases flexibility in digging. This not only allows growers to leave peanuts in the field longer to improve yields and grades, but also minimizes pod loss when peanuts have to stay in the field past optimum maturity when digging conditions are poor. Keep in mind, spider mites can be a problem when we over-spray fungicides under hot and dry conditions or when we use insecticides to control southern corn rootworm when it is not needed.

Tankmixtures with three or more components are desired in some instances. A chapter in our 2013 Peanut Information series gives some general comments on mixtures, but most times will not have an answer for a specific combination with three or more components. Keep in mind that while mixtures save time and money, in many instances we are early for one pest and late for another when the mixture is applied. Logistics may trump this fact, but just know sequential applications are often more effective.

KRIS BALKCOM
Auburn University
Agri-Program Associate
Hopefully everyone’s crop is off to a good start. I know the crop is later than what most anticipated. However, we have to take the circumstances we are dealt. I want to remind everyone, the importance of scouting peanuts is to be aware of pests whether it is insects or diseases. Some of us have a tendency to relax and not scout as closely as we should.

July is when most growers start to apply their soilborne disease fungicides, which happens to be when the peanuts are typically around 60 days of age. I caution everyone to be mindful of the weather conditions that we have this summer and the late crop. We very well may need to start earlier at 35 to 40 days with soilborne disease materials if we endure a lot of heat coupled with moisture.