Investing In A Good Stand

As we move into the planting season, there may be a tendency to want to reduce inputs to save money. This is understandable given the anticipated expense of growing the peanut crop in 2022. However, a majority of our inputs pay for themselves.

Early in the season, there are two areas that can be scrutinized for contributions to yield and financial return — weed and thrips control. In the Virginia-Carolina region, both of these pests negatively impact yield if not controlled. A solid herbicide program with residuals at the beginning of the season, along with in-furrow insecticide sprays for thrips pay for themselves even when margins are tight. If we cut back on these, we will likely find ourselves playing catchup in June.

In my experiences, applying a preplant incorporated herbicide (either Prowl or Sonalan), a chloroacetamide herbicide plus flumioxazin (Valor SX) right after planting and paraquat plus Basagran plus residual herbicides approximately three weeks after planting provides a solid foundation moving into the remainder of the season. In most fields, a follow up of one or two spray(s) is needed.

It can be attractive to cut back on herbicides early in the season and focus on postemergence herbicides. However, the challenge is being able to be timely with these sprays, especially at the frequency needed, when residual herbicides are not applied.

Moreover, when we rely heavily on our postemergence herbicides, we are often making applications to larger weeds. Incomplete control pushes weed populations toward resistance. It is hard to keep up with postemergence sprays once weeds get away from us.

It is also important to buy time early in the season with thrips control. In-furrow sprays give us protection and provide greater flexibility in terms of follow-up sprays applied to peanut foliage, primarily acephate, if needed. While thrips control with imidacloprid has been inconsistent in recent years in some areas, this insecticide still suppresses thrips in many cases. AgLogic and Phorate are also proven in the marketplace.

One might argue that leaving off the in-furrow spray and applying acephate to peanut foliage can save money. However, one spray of acephate is seldom adequate. Can you make a foliar spray within a week or so after peanut emergence and then follow up with a second spray 10 to 14 days later? This is a logistical challenge. In most fields, it takes two sprays — either one insecticide in-furrow followed by a postemergence spray three weeks after planting or making two postemergence sprays seven and then 21 days after peanuts emerge. With the acreage we have, the latter approach carries considerable risk.

In summary, our approach to getting a stand with adequate biological nitrogen fixation and without weed interference and thrips is essential no matter the price of peanuts or the cost of early season inputs. If you plant peanuts, get them off to a good start.

With planting season underway, there are a couple of topics I wanted to cover. In previous Peanut Pointers, I talked about tomato spotted wilt virus and the importance of insecticide. However, I did not mention seeding rates.

In the past couple of years, we have been looking at higher seeding rates than the recommended six seed per foot. In studies, we pushed the rate up to 10 seed per foot of row in test plots to see if we could increase yield with higher plant populations. The higher seeding rates have resulted in the highest yield numerically for both years that we have tested it. However, even though 10 seed per foot has had the highest numerical yield, it isn’t economically feasible to plant that high of a seeding rate because of the price of seed and return on investment.

It’s more difficult than ever to have a high contract price for peanuts and inexpensive seed. At least we are looking at a good quality seed for this planting season; therefore, we shouldn’t need higher seeding rates. Don’t cut seeding rates either. Keep the seeding rates adequate to ensure a good plant stand and reduce the chance of TSWV.

Another issue at planting is pre-emergence herbicides. This is a necessity where there is Palmer amaranth or pigweed. The use of pre-emergence herbicides gives an early advantage to prevent pigweed from coming up and competing with the crop. I have heard from producers who felt that this may have hurt the crop stand in certain situations, but there is another option this year. We now have a section 18 label for Brake herbicide when applied as a pre-emergent from 12 to 16 ounces per acre. This is another option in case you need it.

Each year, the goal is to plant into good soil moisture with warm conditions to provide seed with the best situation to germinate, emerge and end up with a uniform stand of four or more plants per foot of row. The unfortunate truth is planting conditions change daily, potentially negatively impacting peanut stands. Hopefully, soil temperatures at the 4-inch depth in May are well above the recommended 68-degree mark. Therefore, soil moisture is key to achieving the desired stands needed to reduce the risk to tomato spotted wilt virus and promote high-yield potential. Keep in mind the following factors when determining whether to plant a field or farm.

■ Place seed in dry soil. If there is no moisture at 2 to 3 inches deep, then keep the seed in the bag.

■ Plant shallower than 2 inches in hopes a light rain event will result in quicker germination and emergence.

■ Plant more than 3 inches, trying to find moisture to plant in. The seedling will have excess soil depth to travel through in order to emerge and will be more at risk for poor stands.

If you plant into dry soil and do not get an adequate stand, it was likely not due to poor quality seed.

■ Irrigate before planting to allow adequate moisture for germination. Do not plant into dry soil and then irrigate after planting. This could shock the seed, causing a slower and more erratic emergence.

■ Irrigate afterwards to activate herbicides, typically only a few tenths. Apply more than a few tenths if needed to make sure the soil profile has plenty of moisture for germination and emergence. I have observed several situations where growers only applied a limited amount of water to activate herbicides and ended up not having the desired stands due to loss of moisture under these extreme hot temperatures.

How late can we plant before significantly reducing yield potential?

Georgia growers typically plant peanuts from mid-April to late June. Based on the research conducted in Tifton in the past five to 10 years, April 26 to May 12 has shown the highest yield potential. This does not mean you cannot make high-yielding peanuts in mid-to-late May. It just means the yield potential starts to decline the later you plant in May, and it’s all about the weather. The timing that I consistently observe significant yield reductions is in June. Research has shown as much as a 20% to 30% yield reduction for peanut planted in June compared to those planted in May.

Reach out to your county Extension office if you have any questions or need help.

Peanuts are relatively easier to get an established stand than cotton. The larger peanut seed contains more energy, allowing it to emerge out of the ground. However, efforts should be made to plant peanuts under the most favorable conditions.

As discussed in the last report, optimum soil temperature for peanut germination is at least 68 degrees Fahrenheit for three consecutive days without a cold front in forecast. Gaines County received less than an inch of rain, 0.72 inch to be exact, since last November, and the other Southwest peanut growing regions are also very dry. If this trend continues through May and June, supplemental irrigation to establish peanut stands will be warranted.

For dry soil, irrigate with 1/3 to 1/5 inch of water before planting peanuts. Avoid irrigating after peanuts are planted as the cold water may shock peanut seed, causing erratic germination. Dry planting followed by irrigation may also impact rhizobia bacteria needed for nodulation for nitrogen fixation.

May is important for effective season-long weed management. A plan should include the following: 1. Start clean; 2. Use residual herbicides; 3. Be timely with postemergence applications; and 4. Know your weeds. Rotate herbicide modes of actions and avoid depending on the single mode of action. 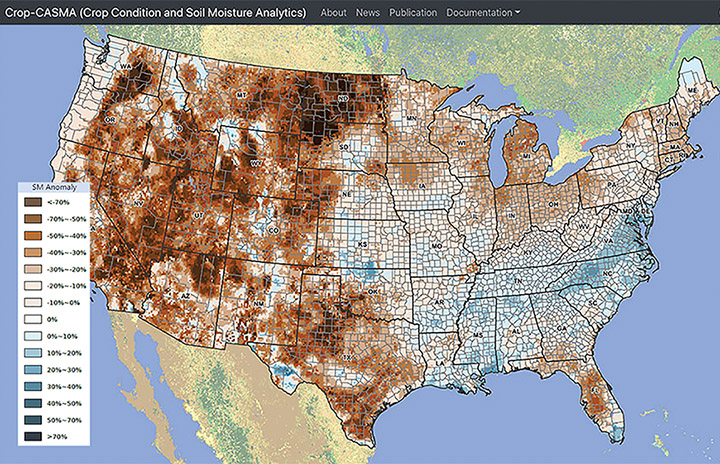