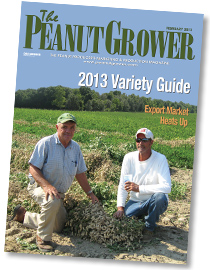 AT-07V: This Virginia-type variety has mid-oleic oil chemistry and is early maturing at 130 to 135 days in West Texas. It is not resistant to TSWV. It is an excellent size for inshell production.

Bailey: Bailey, released in 2008 by NCSU, is a medium to large-seeded and high yielding Virginia-type peanut. It has produced high yields across multiple years and locations, which is an indication of good tolerance to fluctuations of weather and growth conditions. Bailey has a growth habit intermediate between runner and bunch types, bright pods and tan kernel color. More importantly, it is resistant to TSWV and trips. It matures in approximately 145 DAP, just a little after CHAMPS, but it holds pods much better than CHAMPS if picked later.

CHAMPS: CHAMPS was introduced in 2004. It is a largeseeded Virginia-type peanut with a runner growth habit. It is the earliest maturing variety and acreages planted to it increase every year. Yields at early digging (135-140 days after planting in Virginia) are high, and pod size, shape and color are suited for in-shell market. If an early frost advisory is in effect, CHAMPS can be harvested 10 days earlier than NC-V 11 with no reduction in yield. CHAMPS is less susceptible to TSWV than most Virginia-type cultivars. CHAMPS is susceptible to CBR and Sclerotinia blight. High yields and favorable pod characteristics have been observed across years and locations and, similarly to Bailey, showed good tolerance to growth factors.

Florida Fancy: This is a medium maturing (130 to 135 days) Virginia-type variety released by the Florida Agricultural Experiment Station in 2006. It has about 85 to 95 percent fancy pods and is similar in seed size to the typical Virginiatype varieties NC-V11 and Perry, but is not as large as Gregory. The growth habit resembles runner varieties. Its resistance to TSWV is better than that of Georgia Green, and its reaction to white mold and leaf spot is similar to that of Georgia Green. Pod yield of Florida Fancy has been very good, especially in sandy soils.

Georgia-08V: A high-yielding, high-oleic, TSWV-resistant, large-seeded, Virginia-type variety, Georgia-08V was developed at the UGA Coastal Plain Experiment Station, Tifton. The variety has shown a high level of resistance to TSWV. Georgia 08V combines high yields, high TSWV resistance and the high-oleic trait, which is needed for the longer shelf life of the in-shell market, with medium maturity into a large-seeded, Virginia-type peanut variety.

Georgia-11J: A high oleic, large podded and large seeded Virginia-type peanut cultivar released by the UGA Coastal Plain Experiment Station, Tifton. It has a high level of TSWV and is medium-late maturing.

Gregory: Gregory has a growth habit intermediate between runner and bunch types. Maturity is similar to NC-V 11 (145–150 DAP). This variety produces an exceptionally high percentage of ELKs and Fancy pods. Due to large seed size, Gregory has a high soil calcium requirement, which may result in reduced seedling vigor if seed is produced under conditions with limited calcium uptake. It has medium resistance to TSWV.

NC-V 11: Under good conditions, NC-V 11 has high yield and dollar value per acre. Maturity is 145-150 days depending upon growing season. NC-V 11 produces fewer fancy pods and a lower percentage of ELKs than CHAMPS, especially at early digging. NC-V 11 has a runner (spreading) growth habit. It is less susceptible to TSWV than other Virginia-type varieties.

Perry: Perry is a high-yielding, large-seeded and CBR-resistant variety. Perry is less susceptible to Sclerotinia Blight and Web Blotch than other Virginia-type varieties, but tends to have high susceptibility to TSWV. Maturity is approximately 14 days later than that of NC-V11. Growth habit is intermediate between runner and bunch types. Perry has a pink seed coat and good pod color. Fancy pod and ELK percentage is slightly lower than for other varieties.

Sugg: Sugg was released in 2009. Before release, it was known as N 03091T, a line developed at the NCSU to hold multiple disease resistance. It has resistance to TSWV, CBR, Sclerotinia Blight and early leaf spot. Sugg has an intermediate runner growth habit and the color of the seed coat is pink. Sugg produces high yields and has larger kernels than Bailey. It also has good blanching and flavor characteristics.

[INSERT CHART HERE]
Titan: Titan was released in 2010 by Virginia Tech. Titan is an extra-large-seeded peanut with an exceptionally high content of jumbo pods and super extra-large kernels. It is suitable for in-shell, gourmet and green boiling products. Yields are relatively low if not irrigated. Maturity is considered early (only 5 later than CHAMPS). This variety is moderately susceptible to susceptible to TSWV, CBR and Sclerotinia Blight.

VA 98R: This is an early maturing large-seeded peanut with some tolerance to Sclerotinia blight. It is characterized by a runner growth habit. It is susceptible to all other peanut diseases in the region. It matures approximately seven days earlier than NC 12C.

VC-2: This Virginia-type variety has a high-oleic oil chemistry with a pod size smaller than NC-7. It is wellsuited for West Texas.