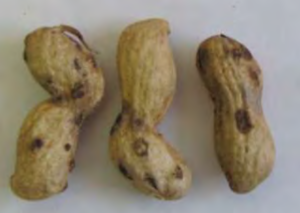 Pod wart, a bacterial of peanuts, was confirmed for the first time in the Western Hemisphere, according to a report in “New Disease Reports,” an online peer-reviewed journal published by the British Society for Plant Pathology.

Pods with wart-like symptoms were collected from the University of Georgia’s Bowen Farm in Tifton, Georgia. Scientists used PCR genetic finger printing to identify the causal agent, Streptomyces spp. They then used Koch’s postulates to confirm that the bacterium was indeed what caused the disease.

Peanut wart has been reported in Israel and South Africa. However, this appears to be the first report of Streptomyces spp. causing pod wart disease of peanut in the United States and the Western Hemisphere.

The scientists use spp. to refer to a group of species. That’s because different Streptomyces species or groups are suspected of causing the disease in different regions.

In South Africa, for example, S. scabiei is associated with the disease in peanuts grown in rotation with potato. Symptoms in peanuts ranged from net blotch with scattered lesions to dark brown, necrotic, warty lesions. S. scabiei also is known to cause common scab of potatoes as well as infect other root crops, such as carrots, parsnips, radish, beets and turnips.

Pod wart bacteria are soil-borne and can survive on infected underground plant parts, including roots, and plant debris. Disease management requires an integrated approach and may include cultural techniques, such as three- to five-year rotations with non-host crops.