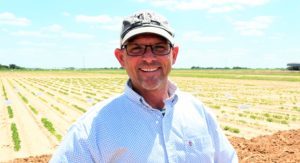 Cason holds a doctorate from Texas A&M University in plant breeding, and he brings more than 20 years’ experience in breeding and developing new peanut cultivars. He supervised all phases of greenhouse- and field-level research at the Stephenville center during that time.

His research interests focus on development of peanut varieties with improved quality characteristics; identifying disease resistance and drought tolerance in wild peanut relatives and; developing introgression pathways to move genes into cultivated peanuts for development of varieties that are eventually used by growers in Texas and the Southwest.

“Cultivar development typically takes around seven years from first cross to release, so it’s a relatively slow process,” he said. “It can take up to 20 years to utilize wild species genetics to develop a new cultivar. We want to try to speed that up with the new technology that gives us the ability to collect and analyze large amounts of data. We’re just trying to shorten the process overall.”

One grant-funded program under his supervision will use drones, also known as unmanned aerial vehicles or UAVs, to collect field data, he said.

“We’re following in Dr. Charles Simpson’s footsteps,” he said. “He’s still here full-time, and we’re grateful he has no plans to slow down.”

Cason’s responsibilities include wild species trait identification and introgression, cultivated population development, oversight of the statewide breeding trials, and coordination with the Texas Foundation Seed Service in initial seed increase of new and currently grown peanut varieties released from Texas A&M AgriLife. He will also collaborate with other scientists in the Texas A&M peanut program from across the state to develop new research and, most importantly, serve the growers of Texas.

“I will continue doing what I’ve been doing with expanded responsibilities, but it is exciting to see the peanut program flourishing once again,” he said. “It’s exciting that there is a commitment to the work we do and acknowledgement of the value of our research and how it benefits Texas and national producers and the consuming public.”