A decade ago, University of Georgia plant scientists David and Soraya Bertioli were living and working in Brazil when they began to wonder about peanut plants they encountered in different corners of the world with an astounding ability to withstand fungal diseases without the use of fungicides. The Bertiolis wondered if these different plants might all have something in common. Did they owe their natural resistance to a single genetic source?

Plant breeders around the globe have worked for decades to create peanut varieties that can fight off fungal diseases, and several have been successful. Though the paperwork didn’t document it, the Bertiolis suspected that a humble weed from Bolivia was the source of all that disease resistance, and they set out to investigate their theory.

This is a story about globe-trotting genes. The genes traveled as plant breeders traded seed but also wound up in peanut fields as pollen stuck to bees, as single seeds accidentally slipped into a bag of another variety, or as labeling errors swapped the providence of seeds of different sources.

Again and again, the wild genes made such a show of strength with their fungal resistance that breeders selected them and made new crosses and varieties. The genes swept from the United States to India, to Africa, to Brazil, to China and Oceanea and back again.

As the improved genetic varieties were adopted, subsistence farmers in Africa raved about the improved peanut’s higher production, better taste, and the abundance of green healthy leaves left over at the end of harvest to feed their goats.

For larger-scale farmers the genes enabled the production of more reliable varieties, which could be sprayed less, and at the same time, produce more. In Brazil, where standard spraying schedules demand nine sprays a season, a variety was produced for the organic market, which required no fungicide at all. 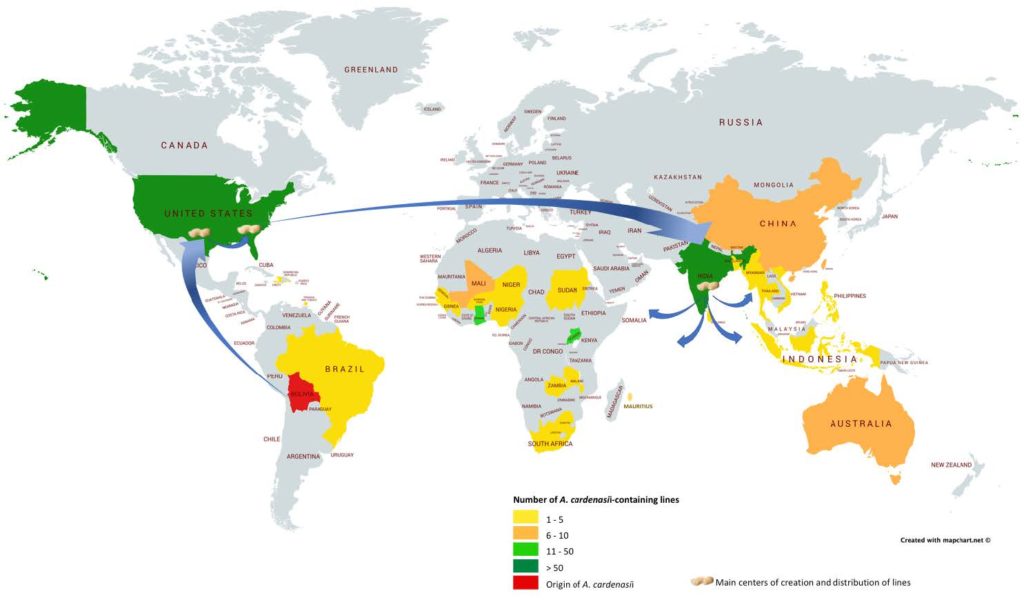 The story of these peanut genes is published in the Proceedings of the National Academy of Sciences this month, along with a plea from two dozen leading peanut researchers to facilitate and stimulate the international networks of collaboration and exchange, which help to make the world’s food supply more resilient in the face of modern challenges.

The Bertiolis run the UGA Wild Peanut Lab (part of the College of Agricultural and Environmental Sciences’ Institute Of Plant Breeding, Genetics and Genomics) as well as separate projects with the Feed the Future Innovation Lab for Peanut, a U.S. Agency for International Development research program headquartered at UGA.

Their primary work is tracking the genes of wild relative species of peanut, identifying where genes that control certain traits lie on the genome, and getting those traits into the peanut crop.

The modern peanut is a miraculous plant. It provides a valuable source of vegetable protein, is able to grow in soils and climates where many other plants struggle, and deposits nitrogen in the soil to improve depleted fields. But the species has limited genetic diversity. That means plant breeders who want to engender disease resistance or drought tolerance, for example, have limited options.

The role of NCSU

“North Carolina was one of the pioneering places,” said Soraya Bertioli. “The scientists at North Carolina State University made crosses (with the diploid wild species A. cardenasii) in the 1960s. After years, those lines eventually became tetraploid and could be crossed with peanuts.”

The work led to several peanut cultivars, including Bailey, which remains the most widely grown Virginia-market type peanut in the United States.

However, once the wild genes were successfully bred into domesticated peanut, the plant looked identical to other peanuts, and people quickly lost track of the special lines.

In 1978 and 1984, researchers in North Carolina shared seed with researchers at the International Crops Research Institute for the Semi-Arid Tropics in India, and the wild genes started their journey around the world.

The head plant-breeder at ICRISAT soon noticed the new plants’ exceptional disease resistances. Knowing how valuable these peanuts would be to farmers, he made sure they were transferred to many countries, where they were used for multiple crosses in breeding programs.

“Originally, where the lines came from was buried in the pedigree, but after a few generations, that information tends to get lost,” David Bertioli said. “When thousands of peanut lines are tested at a time, and multiple new crosses are made, information gets complex and you lose track of what you have.”

Once the Bertiolis became interested in the peanut variety they found in Brazil, they began their investigation, employing several methods of sleuthing: Using the sequenced peanut genome, along with new DNA-based research methods, corresponding with researchers and searching through old pedigree documents and manuscripts. After a decade of work, the Bertiolis tracked down the A. cardenasii genetics, which they found in the genes of peanuts in 30 countries in Africa, Asia, Oceanea, and South and North America.

New international conventions and treaties, and laws in biodiverse countries have greatly inhibited new botanical collections of wild species and seed exchanges. These restrictions have made it difficult or even impossible for scientists to collect and store genetically diverse seed before it is lost. Plant breeders and research institutions also have a harder time exchanging seed to adapt crops to new changes from emerging diseases and changing climate.

The laws that were meant to stop people from monetizing the resources of poor countries have in effect made it much more difficult for scientists to collaborate on large-scale projects to improve food security.