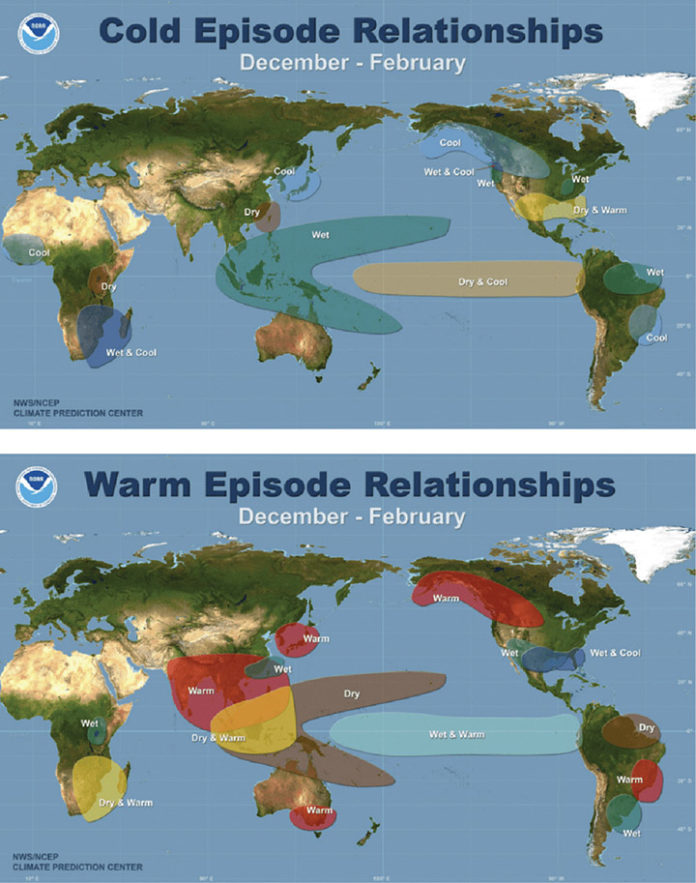 Strong La Niña effects are most associated with severe drought.

Wet and warm are growing conditions Alabama producers are familiar with. However, they are not as accustomed to the same weather during the winter season.

The National Weather Service has released the winter forecast and predicts climate will be under the influence of the La Niña phase of the El Niño-Southern Oscillation. ENSO is an ocean-atmospheric phenomenon that affects temperature and precipitation in the Southeast.

Alabama Cooperative Extension system precision agriculture specialist Brenda Ortiz says the signals for a La Niña winter are strong. She is encouraging producers to pay attention to the climate patterns as they prepare for winter crop planting and management. 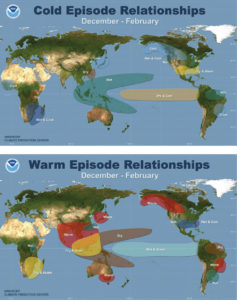 ENSO is the interannual fluctuation of the atmosphere-ocean system in the equatorial Pacific, and it has three phases: warm (El Niño), cold (La Niña), and neutral. 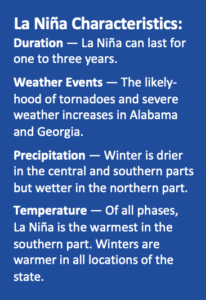 The NWS anticipates a La Niña winter — which means significantly warmer weather for Alabama. It also includes rainfall expectations above average in northwest Alabama and below average in southern counties.

A number of international science agencies work cooperatively to monitor the ENSO system. Data collected worldwide helps characterize the strength of each ENSO phase as well as predict changes over time.

“Scientists use these predictions to anticipate the impacts that will occur during the months that follow the onset of one of the weather events,” Ortiz says.

Because the impact of ENSO is stronger during the winter, the absence of cold weather can affect pest and disease pressures, aquifer refilling and crop growth — including both winter crops and fruit crops.

Ortiz says with advance notice, there are some things producers can plan ahead for.

“The influence of either La Niña or El Niño on the southeastern climate does not usually last a full year,” she says. “However, if the signal is very strong, the influence could last more than a year. Farmers should track the National Oceanic and Atmospheric Administration forecast in case La Niña increases. Previous strong events are connected to the most severe Southeast droughts: 1974 to 1976, 1999 and 2001.”

On average, La Niña brings more rain to northwest Alabama during the winter months, so stream flows are higher, which enables farmers to pull more water into their irrigation ponds.

For more information, producers can read the Alabama Extension publication “El Niño-Southern Oscillation and Its Impact on Alabama’s Climate” about the El Niño and La Niña phases of ENSO. Also, episode 27 of the Alabama Crops Report Podcast is about preparation for the ENSO phase. Producers can also contact Ortiz at bvo0001@aces.edu or visit www.aces.edu. The Apple Book “Climate and Crops” is available for download in the Apple Book store.