⇒ Economic improvements will come, but after this season.

⇒ NPB seeks board members from Arkansas, Missouri and Oklahoma.

At the University of Georgia Ag Outlook Conference, UGA professor of agriculture and applied economics Jeff Dorfman described trends that are shaping the new economy. As to why are there so many jobs but people are not working, Dorfman says most either have money in the bank (35%), or a spouse is employed (30%). Some have care responsibilities at home either with parents or kids, and finally some are scared of catching COVID.

Georgia is No. 1 in job openings, eighth in separation rates of quitting or being fired, and fourth for hiring rate. Georgia ranks eighth in growth. Normal savings for a household is 7-8%, whereas Georgians are up to 33%. Georgians have 75 billion in savings and less credit card debt. In family income, 30% is spent on services (haircut, etc.) and 70% for goods or stuff. Personal expenditures are up 16.8% for stuff and down 1% for services since the pandemic.

Will there be a recession? Dorfman says “No,” because there is too much in savings and room on credit cards. But there will be an economic slowdown.

Dorfman says, “Farm debt is manageable and interest rates are low. 2022 is a survival year. Hang on through these input costs for one more growing season and then look for improvement.”

University of Georgia Extension ag economist Amanda Smith reminded attendees at the Ag Forecast that the slowdown in growth and inflation is being felt across the economy.

She says it is evident that supply chain disruptions are affecting imports and increasing the cost of inputs. She predicts that the Federal Reserve will increase rates and government support to farmers is likely to decline in 2022.

Smith says factors affecting the peanut market are as follows: quality of 2021 crop looks good; food use is strong but has softened; exports are expected down; ending stocks are ample; acres are likely to be increased; and season-average prices will be about $440 per ton.

Inputs that impact cotton and peanuts include land values and cash rents are up by $10 an acre over last year. Interest rates are likely to increase; diesel and fuels are up and not expected to decline until possibly mid-2022. Ag chemicals are increased 5-6%. Fertilizers are much higher, and labor, which is scarce, is also more costly. Seed prices will increase slightly, and machinery and equipment prices are higher.

Billy Skaggs, manager of the Georgia Crop Improvement Association, said at the Georgia Peanut Farm Show’s Seed Seminar that certified seed acres in Georgia decreased to 128,000 in 2021 as compared to 135,000 acres in 2020. Inadequate isolation is the most frequent issue leading to acres being rejected. Isolation of four rows or a minimum of 10 feet is required for all classes of certified seed from other varieties.

Field inspections were completed in September, with certified buying points inspected in the fall, along with additional warehouse facilities. Georgia crop improvement staff are currently inspecting shelling and treating facilities.

Skaggs reminded farmers that they may save enough seed to plant his or her own holdings but may not sell  seed without permission from the variety owner. Georgia-18RU is a patented variety and seed may not be saved. A patent application has been filed on the variety Georgia-20VHO.

The neighboring states of Alabama and Florida have 27,154 and 4,377 acres of certified seed, respectively.

“I look forward to working with Georgia peanut farmers and our partners to help enhance the peanut industry and the profitability of farmers,” Boddiford says. “Farmers can contact me at any time if they have suggestions for the work of the Georgia Peanut Commission on their behalf.”

The Georgia Farm Bureau Federation conducted board nomination meetings for the commission’s districts 2, 4 and 5 on Dec. 20-21, 2021. During the  meetings, two board members, Dawson and Chase, were renominated for districts 4 and 5 seats, respectively. Also, Kendrick was nominated without opposition for the district 2 seat, previously held by Armond Morris. Morris retired after serving on the Georgia Peanut Commission board of directors for more than 40 years and 20 years total as chairman.

New advisory board members were also appointed and include Leslie Jones of Jacksonville; Brett Sauls of Shellman; and Wesley Webb of Leary. Advisory board members David Reed of Pinehurst; Neil Lee of Bronwood; and Carl Mathis Dixon of Alapaha retired from their role in January 2022.

More than 400 attendees were able to fine-tune their farming operations with information gained at the Alabama-Florida Peanut Trade Show Feb. 3, 2022, at the National Peanut Festival fairgrounds, in Dothan, Alabama. The show is sponsored by the Alabama Peanut Producers Association, Florida Peanut Producers Association and the National Peanut Board.

The one-day show offered growers and industry partners a chance to view the products and services from more than 60 exhibitors.

A complimentary lunch was provided to trade show attendees. After lunch, Bob Parker, NPB president and CEO, updated growers on how their check-off dollars are being spent to promote peanuts. Marshall Lamb, with the USDA’s National Peanut Research Lab, provided an update on the 2022 peanut market and crop outlook. Bob Redding, of The Redding Firm, presented a legislative update. Darlene Cowart, Birdsong Peanuts, talked about the value of food safety from the peanut field to the shelling facility.

Several door prizes were given out throughout the morning of the trade show, but the prizes everyone was most looking forward to winning were announced after lunch.

The Grand Door Prize donated by Kelley Manufacturing Co. was presented to Chad Wells of Gordon, Alabama. Wells received a $5,000 voucher for any one piece of KMC equipment or parts for KMC equipment.

The Arkansas Peanut Growers’ Association, Missouri Peanut Producers’ Association and Oklahoma Peanut Commission are seeking eligible peanut producers who are interested in serving on the National Peanut Board.

Nomination election meetings will be held to select two nominees each for member and alternate from each state to serve on the National Peanut Board. All eligible producers are encouraged to participate.

Eligible producers are those who are engaged in the production and sale of peanuts and who own or share the ownership and risk of loss of the crop.

USDA requires two nominees from each state for each position of member and alternate. The NPB will submit each state’s slate of nominees to the U.S. Secretary of Agriculture, who makes the appointments.

Arkansas Peanut Growers’ Association was to have held their meeting in February. The date and location of the Missouri Peanut Producers Association was still being determined at the time of publication.

The Oklahoma Peanut Commission will hold a meeting on March 24, 2022, at 2:30 p.m. at the end of the Oklahoma Peanut Expo. The expo will be at the Business Enterprise Center at Southwestern Oklahoma State University, 1121 N 7th Street, Weatherford, OK 73096.

Celebrate all things peanut in Blakely, Georgia, at the annual Peanut Proud Festival on the town square March 26. The day-long celebration begins with a 5k and Fun Run and ends with a Street Dance. In between will be the parade, more than 100 vendors, a kids’ peanut butter obstacle course, free entertainment and more. Come sample specialty products such as fried peanuts and grilled PB&J sandwiches.

APRES will maintain its current identity, branding and board/governance structure. This will provide an opportunity for cross-industry conversations about research priorities and challenges, including shared events and committees.

The water footprint of peanuts has been relatively small for decades, but updated data shows the industry has improved water efficiency by nearly one-third. 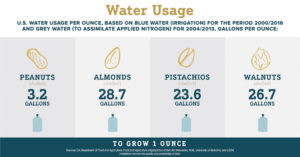 Newly released data shows that 3.2 gallons of water is used to produce one ounce of shelled peanuts. Water usage for major tree nuts has also improved but remains higher than peanuts. Almonds use 28.7 gallons; pistachios use 23.6 gallons; and walnuts use 26.7 gallons of water to grow a one ounce serving.

In the latest analysis, researchers used “state-level data such as harvested area, production, yield and irrigated area,” says Mesfin Mekonnen, assistant professor, Department of Civil, Construction and Environmental Engineering at the University of Alabama. “The use of updated data, particularly yields, has improved the estimates.”

“Production research efforts through the National Peanut Board, state associations and the Peanut Research Foundation have led to significant improvements in yields over the past decade,” says NPB president and CEO Bob Parker. “Peanut farmers today are producing about 50% more peanuts with fewer inputs, including irrigation, than they were 10 years ago.”

“Farmers are always looking to gain efficiencies in crop production,” says peanut grower, NPB Arkansas board member and research committee chair Greg Baltz. “Peanut farmers have made significant investments in production research, and this science has played a role in adoption of improved water-use practices. We have an inherent desire for both economic and environmental security into the future.”

In addition to using only 3.2 gallons of water to produce one ounce of edible product, peanuts are a zero-waste crop. From the roots to shells, every part is utilized throughout the planting, growing, harvesting and production process.

Since 2001, the NPB has allocated more than $38.5 million to production research projects including to improve water efficiency, technology and more. These advancements as well as continued collaboration and efforts across the peanut industry allow peanut growers to meet the various needs of consumers.

Increased production and increased demand have led to two consecutive years of record peanut per capita consumption levels, reaching an all-time high of 7.9 pounds in 2021.

“Today’s society demands that food is sustainably produced. At the same time, U.S. peanut growers must be able to make a sustainable living,” Owen says. “Eric has the skillset and experience the peanut industry needs to document our sustainability story, to drive our own sustainable future.”

Coronel was a senior research analyst with Field to Market: The Alliance for Sustainable Agriculture and oversaw the massive data collection and analysis that yields the alliance’s National Indicators Report, which outlined the progress of 11 crops against indicators of environmental sustainability.

Coronel will work directly with U.S. peanut growers to document peanut’s sustainability story that can be aggregated and shared with customers and consumers here and abroad. In return, growers can apply what they learn from the sustainability platform to drive their own farm improvements and profitability. APC will also produce tools to help the peanut supply chain communicate about peanut sustainability with their customers and stakeholders.

Coronel’s first job was at John Deere as a research agronomist before moving to Field to Market to specialize in sustainability. He will be based in Tifton, Georgia.