A new year generally rings in fresh optimism as farmers look ahead to the next planting season. Yet, as 2021 was coming to an end, despite strong commodity prices, growers were increasingly concerned about the future. It’s like the coach who feels he has a great team but doesn’t know which play to call.

Buyers have no urgency. They seem to think acres planted will be about the same to slightly increased and are not factoring in that cotton is $1.10 per pound, corn is $6 per bushel and soybeans are as high as $15 per bushel. Most analysts predict peanuts will lose dryland acres to the higher-priced crops. Soybeans offer the best return on paper but aren’t a great option for peanut growers and their rotations.

At the same time, economists predict that the high cost of fertilizer will drive farmers to plant more peanuts. Peanuts require little fertilizer, except calcium. However, in the Southwest, some farmers do apply fertilizer to peanuts in certain situations.

Domestic markets have slowed, and U.S. peanut exports have softened over the past 12 months. Reasons for this include the non-tariff trade barriers to Europe and little to no crushing stock for export because of the back-to-back high quality, low aflatoxin, U.S. peanut crops.

In the Southeast, certified seed acres decreased to 128,000 in 2021 when compared to 135,000 acres in 2020. Inadequate isolation is the most frequent problem that leads to rejected certification of acres. There could be a shortage on some minor varieties, which suggests securing seed early if possible. The state seed lab says there was significantly less aflatoxin last year, and the quality is good to very good on most lots with germination in the 80s and 90s.

2022 farmer-stock contracts opened with $500 per ton, plus a $25 per-ton premium on seed and/or high oleic types. In the Virginia-Carolina region, contracts on Virginia-market types were offered at $500 to $520 per ton, plus a $25 per-ton premium for irrigated peanuts. The offer on runners was $475 per ton with a $25 premium for high oleics and/or irrigation.

Production costs estimated by Exten­sion and ag economists average about $545.97 per ton. With new increased input costs added in, the total cash flow cost is $666.94 per ton. 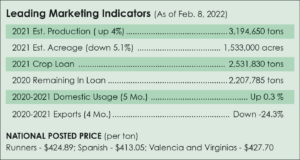 Peanut usage is up 0.3% for raw peanuts in primary products with peanut butter showing a decline during the five-month marketing period of 1.1%. December showed a 7.7% increase.

The government purchased 4.47 million pounds of peanut butter and 77.8 thousand pounds of roasted peanuts during December for nutrition programs.

Despite reduced beginning stocks and imports, the anticipated 8.5-billion-pound supply of peanuts is 75 million pounds above the 2020/21 supply because of higher yields. Deflated from last year, 2021/22 exports are down 8% to 1.3 billion pounds, suggesting a decrease of 3.2% in total peanut use on unchanged crush (875 million pounds).

Domestic food use, the largest category of consumption, is expected to rise marginally and reach 3.39 billion pounds. With higher supplies and declining peanut use, ending stocks are expected to increase to 2.25 billion pounds (1,125,000 tons) after settling at 1.97 billion pounds in the previous year. Over the past two years, domestic peanut consumption is up 6.8%, peanut butter is up 7.9%, snack peanuts are up 8.1% and peanut candy is up 13.7%.

The first four months of the peanut export marketing year are disappointing, down 24.3% from last year. In-shell peanuts are taking a hit, down 55.1% as China reduced purchases 70%, which indicates that the U.S. is low in peanuts for crushing to oil stock. The pandemic appears to have impacted peanut butter exports, up 22.2% with Canada and Mexico as top buyers. Raw-shelled peanut shipments are down 18.7% but improved.

Increased global production, up 5.4% in the past two years, coupled with decreased export interest from China, down 60%, has slowed U.S. peanut exports from the record-setting total in the 2019-2020 marketing year.

The 2022 Argentine crop is growing well, with exceptionally hot weather during the first half of January. Officials say Argentina never really had a severe drought but only had some stress for a couple of weeks during January with few rains and extreme temperatures. Overall, the crop looks average. Approximately 380,000 hectares were planted. Weather conditions in Brazil and Argentina are a concern to the market.

All the talk in Washington D.C. is that the Farm Bill must be “climate smart” to reduce greenhouse emissions and protect the soil. Peanuts are the perfect commodity with a federal program that has worked effectively. In the peanut world, there is no waste. The U.S. Peanut Federation is working almost daily on issues and making contacts in support of the peanut program. Farmers are urged to support the political action committee managed by the federation to make certain agriculture committee members know the peanut industry is united, and it is united with other commodities as well. PG