Déjà vu All Over Again

My mom was a school teacher. For years she taught home economics, a useful class that is unfortunately no longer taught in schools. She eventually became the guidance counselor at the elementary school.

Over the years, as we would see people in various places around town, she would say something like, “I taught her and I also taught her mom.” Before her career was finished, she was seeing the grandchildren of some of those early students coming up through the elementary school.

Last summer on the Georgia Peanut Farm Tour, I had my own such experience. We were on Joe Boddiford’s farm looking at the vast array of equipment used on the farm to grow peanuts and other crops.

During the digging demonstration, I took the picture used on this month’s cover. Driving that tractor was Knapp Boddiford, Joe’s son. Knapp had recently graduated from Abraham Baldwin Agricultural College in Tifton with a degree in diversified agriculture with a concentration in agricultural business. Knapp had also planned to return to the family farm, but decided college was a needed step in between. 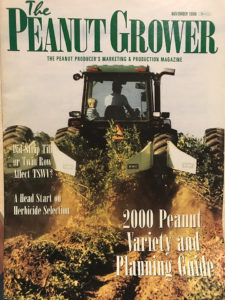 This past summer, just as Knapp was starting to dig peanuts, the nearby center-pivot irrigation system turned on. Joe pulled out his phone, made a few taps on the screen and the pivot stopped.

Over the years, the Boddiford farm has been a place to see many different types of advanced and precision technology in peanut farming. I can’t help but wonder what types of technology Knapp will be using in another 20 years.

Will I even be able to take a picture of him in the tractor then or will that be a thing of the past? All that remains to be seen, but I look forward to finding out.